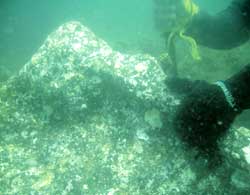 The December 2004 tsunami, which battered much of the south Indian coast, has helped unearth priceless relics in the ancient port city of Mahabalipuram in Tamil Nadu. The killer waves shifted thousands of tonnes of sand to uncover granite sculptures which archaeologists claim, are remnants of a seventh-century civilisation. The sculptures include an elaborately carved lion, a half-completed elephant and a stallion in flight.

"As the tsunami waves receded, they scoured away sand deposits that had covered these sculptures for centuries," says Alok Tripathi, an underwater archaeologist. Tripathi, who led the Archaeological Survey of India (asi) team that excavated Mahabalipuram, says the discoveries throw new light on this ancient port city, south of Chennai.

Ways of the sea Mahabalipuram was an important centre of the Pallava dynasty, which held sway over much of south India between the fourth and the ninth century.Known for its Shore Temple, the city has been designated by the unesco as a World Heritage Site. Legend has it that Mahabalipuram had six other temples -- seafarers referred to it as the land of seven pagodas till even two centuries ago -- which were consumed by waves (see box: Land of seven pagodas).

The city has also been the subject of much scholarly curiosity. asi had begun excavations here in 2001. But the tsunami threw a spanner in their works. Only for a brief while, however: the archaeologists got going again after a report from local fisherfolk. Just before the tsunami waves struck on December 26, 2004, the sea withdrew about 500 metres, baring its bed on which lay a temple structure and several rock sculptures, the tsunami-struck fisherfolk announced after they had recovered some of their bearings.

Once the waves subsided, asi researchers enlisted help of divers from the navy to scan the deep seas. "We found some stone structures which appear to be man-made. They are perfect rectangular blocks arranged in a clear pattern," says Tripathi.

The investigators also found partly submerged blocks of walls, some of which extended into the land. "Our investigations showed that the partially submerged blocks and those completely under water are part of one edifice," said Tripathi. "The blocks appear to be part of a temple wall," the archaeologist added. Other parts of the temple that surfaced include a square garbha griha -- the sanctum sanctorium -- an elegant terracotta ring well and a sandstone kalash (an urn).

The archaeologists are, however, not ruling out other possibilities. Some of them speculate that the granite beasts uncovered by the receding waves once stood guard at a port city's entrance. The 2-metre high lion statues, each hewn from a single piece of granite, appear breathtakingly lifelike. One great stone cat sits up alert while the other is poised to pounce. The elephant could have also been sculpted to adorn the city walls, the archaeologists believe. It now attracts scores of visitors who touch its eroded trunk as a good luck talisman.

Lions, elephants and peacocks were commonly used to decorate walls during the Pallava period, say members of the asi team. "The findings reveal Pallava grandeur," says one of them.