In 1962, it was the Indo-Chinese war. Now it is the creation of the Nanda Devi Biosphere Reserve. Once again, the Bhotiyas, who inhabit the Garhwal hills, find themselves at crossroads. They find their means of sustenance cut off. The difference this time is that they have decided to stand their ground and not become puppets in the hands of the government 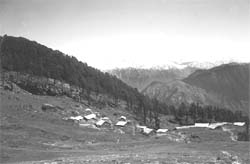 the Bhotiya villages of Lata, Reni, Jumma and Dunagiri wear a deserted look. Many houses are vacant. Most of the houses that are inhabited are managed by women as the men have migrated to neighbouring towns to earn a living.

Migration and change is nothing new for these people. In 1962, the Indo-Chinese war forced them to migrate because the trade between India and Tibet was banned after the war. Now it is the Man and Biosphere (mab) programme of the government of India which threatens their livelihood and link with the area they inhabit. The creation of the Nanda Devi Biosphere Reserve (ndbr) under the mab programme has led to the forest department imposing a blanket ban on access to the Nanda Devi sanctuary, which is in the core zone of the ndbr.

The Bhotiyas live in the Garhwal and Kumaon divisions of the Uttar Pradesh hills and have traditionally been an important link in the trade across the Indo-Tibet border. They have been both trade parties (in the predominantly barter trade) and transporters of goods. Sheep and goats were the major carriers of goods across the tough terrain and so Bhotiyas, who kept large flocks, were also graziers by occupation.

Deprived of the cross-border trade after the war, they took to tourism whole-heartedly, which boomed after the improvement of the road network to the Nanda Devi sanctuary. The Bhotiyas made good in their new occupation. In summer months, it became the most important source of income for the menfolk. The men accompanied expedition groups, while they camped inside the sanctuary, sometimes for as long as two months. For the Bhotiyas, the treacherous route meant jobs as porters to carry supplies.

"I used to earn Rs 150 a day, at times even Rs 300. It was easy to pay for my children's education and run the household," says Bachan Singh, who was a shepherd before becoming a porter. "Ever since the ban on access to the sanctuary, it has become difficult to carry on because there are no tourists," he says.

With the formation of the ndbr, the Bhotiyas find themselves compelled to look beyond their traditional habitat for survival. The stress is visible but this time there is no war and they have decided to stand their ground and not let themselves be manipulated by the government. These people, who once sparked off the famous 'Chipko Movement' for the protection of forests, are demanding their rights over the forests and are at loggerheads with the government. The new movement is called 'Cheeno Jhapto' (pounce and grab) and has aggressive overtones as compared to the earlier movement. "We want the rights to our forests restored," says Raju, a 39-year-old guide from Lata, a village located at the mouth of the Rishi gorge.
Launched in 1988, the mab programme claims to have adopted a different approach from other forest conservation programmes in India. "National parks displace people, whereas biosphere reserves do not disturb the people inhabiting the core zone," says D K Rai, joint director of the ministry of environment and forests. He is emphatic that the mab programme is people-friendly.

Rai claims the programme is sensitive to the needs of the local people and does not require them to leave their habitat even if it falls in the core zone. The programme also demands no "external human interference" in the core zone of the reserves. This means that the rights of the people who live in the buffer zone but are economically-dependent on the core zone are completely ignored. The government agencies are proud of their "people-friendly programmes", which sidestep and overlook such facts.

The ndbr is an example of how the top-down government conservation policies -- wrapped in a people-friendly format -- are in conflict with the people. ndbr is one of the 11 biosphere reserves in India which are supposed to represent the 10 different biogeographic zones in the Indian subcontinent. It is a conservation zone for the Himalayan highlands biome type. Covering an area of 2,236 sq km and spread over many beautiful high altitude ridges, glaciers and river gorges, the focus of the area is, of course, the famous Nanda Devi peak (7,861 metres), the second highest mountain in India after Kanchenjunga.

The topography of the biosphere is peculiar as it lies in the basin surrounded by ridges and peaks of over 6,000 metres high and drained by the treacherous Rishi Ganga gorge. The basin is known as the Nanda Devi sanctuary (as in sanctum sanctorum and not wildlife conservation parlance). The 360-sq km sanctuary remained pristine until two British explorers first set foot in it in 1934. They opened up a long and tough route to the Rishi gorge.

A buffer zone of 1,200 sq km, encircles the sanctuary comprising 16 Bhotiya villages. Many of the inhabitants lived in villages at higher altitudes, which they abandoned after the Indo-Tibet trade was discontinued. A village called Milam in Kumaon, which was an important trade centre, amply illustrates the consequences of the 1962 war. Today, it wears a deserted look.


Tourism, the main source of livelihood for the Bhotiyas, was also the reason why the forest department clamped down on the area. Hectic tourist activity took its toll on the ecology of the Nanda Devi basin. The sanctuary had never been a traditional forest resource for the villagers. It was pristine and was like new-found bounty to be plundered, which the villagers did with as much gusto as the tourists. Stories abound of how bharals (blue sheep) were hunted and trees felled for firewood and spanning rivers.

Conservationists and naturalists, who monitored the decline of the sanctuary, pressed for a ban on tourism. The government finally complied. But, once again, the livelihood concerns of the Bhotiyas were disregarded. The repercussions are now being felt in the form of the 'Cheeno Jhapto' movement. "The real motive of this movement is to continue tourism in the sanctuary. But as that seems improbable, the villagers are demanding their rights over forest resources," says a forest guard at ndbr.

"We cannot make all the people happy. Biosphere reserves at least allow locals to continue living in the core zone," says Rai. Such simplistic observations ignore the dynamics of the Bhotiya lifestyle and the fact that curtailment of resources and livelihoods are as effective as physical displacement of the people. The livelihood needs and practices of the people have to be addressed even in biosphere reserves.

ndbr is a special case because there is no habitation in the core zone in the first place and it is people in the buffer zone who are dependent on access to the core zone. It is also important to resolve the conflict between the local inhabitants and conservationists for effecting and sustaining these programmes.

The involvement of the Bhotiyas -- for whom the mountains are also the divine abode of their goddess Nanda Devi -- in conservation of this area is vital. It is the only step possible if their livelihood needs are to be addressed.

Alternative sources of livelihood which connect Bhotiyas to their villages, rather than force them to migrate, have to be evolved. This will need political and bureaucratic maturity and an understanding that local people are most viable conservators.

Otherwise, for the Bhotiyas, the conservation drive will remain equivalent to the Indo-Chinese war.