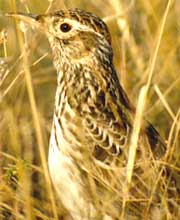 Human intervention is changing avian music -- and the purposes to which it is directed. In the old non-invasive circumstances, songbirds used to give voice when they wanted to attract mates or mark out territory (see box: Natural synthesisers). The difference was that birdsongs used to travel long distances in habitats that had not been despoiled, conveying detailed information about the location and identity of the singing bird. But research shows that songbirds are increasingly communicating over shorter distances, because habitats are being fragmented -- and the purpose of communication is not as romantic as it used to sound. Now, birds sing to communicate about actual or impending ecological damages and compete with neighbours.

The research was carried out by Paola Laiolo and Jos Tella of Estacin Biologica de Doana in Seville, Spain -- the findings being published in the Journal of Applied Ecology (Vol 42 No 6, December 2005). The researchers analysed the birdsongs of more than 200 Dupont's larks ( Chersophilus duponti ), a rare and specialised steppe passerine bird (see box: Dupont's harmless lark), in Spain and Morocco. What they found was that these birds tend to match their songs -- for mates or forage -- over a smaller habitat space, because habitats are bring fragmented. Neighbours, those who share the same territory, are increasingly becoming non-neighbours and with it the shrinking of interaction among individuals isolated by barriers is increasing. Laiolo and Tella argue that habitat loss is the only possible explanation and factors such as breeding season cycles are not responsible.

Because of man-made habitat barriers, birds are no longer able to detect the presence of rivals over distances, which contract the range of an individual bird's acoustic reach. "Communication systems of habitat-sensitive species might be used as a behavioural indicator of anthropogenic environmental deterioration," the paper says. This is because birds are usually habitat sensitive and adapt fairly quickly. "Because of their rapidly evolving cultural nature, bird singing might become an early warning system detecting the effects of fragmentation over relatively short times and before other indicators (such as genetic markers) show any change," say the researchers. In the case of Dupont's lark, habitat loss of open grasslands markedly affected song-matching mechanisms. "The occurrence of anthropogenic habitat barriers seems to hinder cultural transmission of song types over distances, resulting in an intensification of the differences between non-neighbours and increasing mimicry between neighbours. This suggests that males from fragmented habitats perceived as rivals only the close neighbours with which they engaged in counter-singing," says the paper.

Song-matching as a form of avian rivalry is rapidly transmitted. This phenomenon is a male bird's reply to a rival's song, usually a bird of a different species that has invaded its territory. Young males -- usually birds of the Passeriformes order sing -- take lessons from territorial adult males. Fledgling song sparrows have been known to match songs of adult males and get their first territories invading those of their instructors. Song-matching increases familiarity among group members, also serving as a signal of respect of territory among neighbours. But as humans increase communication skills, those of songbirds are sadly in decline.