With the dismantling of the Union Carbide factory responsible for the Bhopal gas leak, vital evidence in the case, which reveals the company's callousness, will disappear 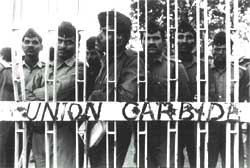 for the five lakh people who were exposed to the lethal gas leak in Bhopal in 1984, it has been one battle after another. Now they are fighting perhaps their last battle -- to stall the dismant-ling of the Union Carbide factory. Even as victims of the tragedy discover to their horror that the poison has affected their genes -- since 1994 there has been a steep rise in children born with deformities -- and the medical fraternity gropes in the dark, trying to identify the lethal chemical cocktail responsible, the culprit, Union Carbide India Limited (ucil), is making a sneaky exit.

Throughout, ucil has withheld all information it had about the effects of exposure to the chemicals it used under the pretext that it was a "trade secret". What is even more galling, even the government of India has withheld the findings of a number of studies on the health status of the victims, conducted over a period of 10 years. In the pall of this official and industrial secrecy, the victims are fighting to keep 'the factory of death' there as a grim reminder to future generations. With methyl isocyanate (mic) in their blood, it's a daily fight for survival for the victims. mic and hydrogen cyanide were just two of the gases released. Studies indicate that mic , mixed with water at a high temperature, can produce 65 chemicals, most of them toxic.

The result of 13 years of ignorance has been that doctors prescribe drugs that treat symptoms, providing only temporary relief. Each survivor, in the last 10 years, has consumed more than 10 kg of medicines, according to local doctors. A study carried out in June 1990 by a team of doctors shows that the incidence of hazardous and unnecessary medication in government hospitals is as high as 36.7 per cent.

In 1994, ucil sold all its assets in India (nine plants, including one in Bhopal) to Eveready India Limited (eil), a Khaitan holding, reportedly for Rs 400 crore. eil immediately set about selling the Bhopal plant as scrap. It is now selling the scrap to a Delhi-based businessman. A substantial part of the factory has already been dismantled and shifted to Delhi. Soon, the factory will disappear. And its secrets will remain secrets. For activists like Abdul Jabbar of the Bhopal Gas Peedit Mahila Udyog Sangathan (bgpmus), it is part of a conspiracy to eliminate all the evidence in the case. Says Jabbar, "We will fight till the end and not let the plant be dismantled. They (the government and the ucil) didn't listen to our woes -- at least they should not take away the symbol of the tragedy."

As far as eil is concerned, however, the plant has to be disposed of. A senior eil official, who spoke on condition of anonymity, said that the plant is a liability. "As a commercial measure we have to sell it first. This has been approved by the appropriate authority." The Delhi scrap buyer started dismantling it in April 1994 and eil is desperately waiting to hand over the leased plot and the seized mic tank to the state government once dismantling is complete.

In June 1994, when the Madhya Pradesh chief minister was informed of the developments, he termed it "illegal". On September 11, 1996, the bgpmus and the Bhopal Group for Information and Action (bgia) wrote to the state chief minister, the home minister and the police asking them to immediately stop the dismantling as it "was destroying vital evidence".

Around this time, some toxic chemicals stored in various tanks in the factory leaked out again, creating panic. With legal interventions from bgpmus and bgia , dismantling was stayed by the district court. But on May 9, 1997, the chief judicial magistrate overruled the objection after the Central Bureau of Investigation (cbi), which had seized the plant immediately after the tragedy, gave its consent. By July 1997 the naphthol and the formulation plants were dismantled. "This demolished the basic evidence in the case," says Jabbar. After legal action failed, about 500 victims laid siege to the plant and stopped the demolition by force on July 19, 1997.

Questions regarding the nature of the chemicals released and the suppression of medical facts regarding the tragedy by the government and ucil , which is no more registered as a company in India, remain unanswered. The ucil did not inform the workers about the hazardous nature of the chemicals they were dealing with. Reports of regular check-ups of workers were never given to Indian authorities or to the workers, but were sent to the company's us headquarters. A doctor in a government hospital in Bhopal who had called the medical officer of the plant for information on the chemicals on the day of the disaster says: "I was categorically told that it is like tear gas but I was not given the composition which was vital for treatment. A few days after the disaster, the Union health ministry tried to get the names of the chemicals, but the company guarded its secrets. Chemical engineers who had worked for the plant, when contacted, said that they too had been kept in the dark.

Following up victims' cases was also not possible. "All medical check-ups were done by us specialists in toxicology and were sent to the us on floppies marked 'confidential'," says the government doctor. It may be mentioned that ucil first denied that mic leaked out from the tank and caused the deaths, but later admitted it and said that it was a case of sabotage.

Immediately after the disaster, Warren Anderson, the former chairperson of Union Carbide Corporation (ucc), the multinational parent body of ucil , was interrogated by the cbi . But the cbi could extract little information on the mic reaction and the chemicals involved. Later, when the cbi prepared its dossier on ucc , it mentioned that the company had manufactured poisonous gases for use in World War ii and still supplies deadly chemicals to the us chemical weapons arsenal. ucc had started operations in 1920 with the manufacture of gases like phosgene for use by the us and its allies.

The Sambhavna Clinic, the only ngo involved in the medical aspect of the tragedy, in its first report, published in 1997, says: "(Most) of the toxicological information held as a trade secret by the corporation has been generated through routine, secret tests conducted on the workers of the Bhopal factory." However, the clinic does not provide any evidence to support this.

In the midst of these accusations, the government has pushed vital reports on the issue under cover. The Indian Council of Medical Research (icmr) launched 25 projects in 1985 covering 80,000 victims to study the effects of the gas on different parts of the body. By 1991, the government had discontinued 16 projects. By December 1994, the government finished the other projects. But publication of these studies has been banned, without any reason being given. When asked, a scientist at the icmr head office in Delhi said that the reports "will be released in due time".

The icmr drafted a "consolidated report" summarising the results of studies in 1994, which revealed precious little. Even the summary was withdrawn soon after. A copy of the report, which was available with the Centre for Science and Environment (cse), however, mentions many chemicals which were released after the reaction. "...the temperature must have gone far above 300 c, owing to thermodynamic reaction of liquid mic in the tank," it says. "At this temperature cyanide can be liberated... The tank residue was studied and... hydrogen cyanide was detected.... In addition, mic trimers and dimers were also detected." The report clearly states that the tank residue "showed a number of chemicals reactants of mic and 40 per cent of blood samples revealed the presence of one or more of these compounds".

Since most of the reports have not been released, the findings remain official secrets. The victims of the tragedy have been pushing for the release of these findings. Says Satinath Sarangi of the bgia: "Without knowing the chemicals that were emitted, you simply can'tprescribe an effective treatment." The bgpmus is planning to file a public interest petition on the environmental degradation caused by the disaster and the government's ineffectiveness in the case. It would also seek publication of the studies conducted by the icmr and the release of information available with the ucil.