Voluntary groups in Madras are taking up the onus of increasing AIDS awareness among various groups including students, blue-collar workers and truck drivers 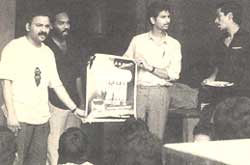 FLIP-CHART presentations, rock concerts and relaxed Sunday-morning conversations at a Madras street corner or over a cup of tea on the highway are some of the strategies being used by concerned volunteers in Tamil Nadu to educate high-risk groups on the steps they must take to avoid contracting AIDS.

The Eighth International Conference on AIDS held in Amsterdam warned Bombay and Bangkok are likely to become major centres of AIDS infection. But the incidence of the disease is also increasing in other Indian cities, including Madras. Hospital statistics list 2,000 AIDS cases in Tamil Nadu. At Vellore, where the Christian Medical College maintains its own records, 32 full-blown cases were reported, of which 12 were surviving in December 1, 1991.

According to Dr Jacob K John of CMC the prevalence of HIV in the prostitutes of Vellore has gorwn from 1.5 per cent in 1985 to 33 per cent in 1990. But as the disease may take as long as five years to manifest itself, this number constitutes only the tip of the iceberg. And, the iceberg itself may prove to be quite massive because the figure of 2,000 is computed from tests of donated blood and blood samples of patients who were operated on in the state's hospitals.

For groups such as AIDS Research Foundation of India (ARFI), involved in AIDS prevention work, there is a sense of urgency primarily because the Indian government has adopted a low-key approach to the problem and because there is a widespread misconception in the country that AIDS is contracted mainly by prostitutes and homosexuals and other persons can become infected only through an inadequately sterilised syringe.

The target group for each of the groups is different, but the message is the same: educate the people about the dangers of the HIV infection and provide them with practical alternatives to their present behaviour patterns.

ARFI works with a core group of three young men and a handful of trained volunteers on educating students, blue-collar workers, truck-drivers and even personnel managers of the corporate sector. For the last category, the message is that it is important to educate their workers on how to avoid falling victim to AIDS.

When ARFI volunteers started work with industrial workers they found they had distinct sex patterns. Port workers, for example, hired prostitutes on Fridays, their weekly payday. Truck-drivers, on the other hand, presented a different problem. Though they carried condoms with them always, they would never use them for paid sex. Instead, they are used to fix radiator leaks in their trucks.

An ARFI survey disclosed that a truck-driver and his assistant would visit a prostitute once every 400 km. The frequency was determined in part by the traditional belief that sex was the only way to dissipate the heat generated in their bodies from sitting too close to the engine. Said ARFI psychiatrist S Sundaram, "We had to design our programme to take care of these two aspects. After telling them to postpone sex so that the number of encounters could be gradually brought down, we taught them that a condom could help them to fix leaks and also dissipate heat safely."
ARFI also conducts group discussions regularly with students in groups of 15 along with their teachers. The storyline is developed from a flip-chart presentation. On World AIDS Day last December 1, ARFI organised Jhive Live, a rollicking rock concert for students, which was punctuated with AIDS-related information.

Although ARFI has been working with all these groups, it is deliberately moving away from working with prostitutes -- female commercial sex workers in technical jargon. "We found that these women were powerless to insist that their clients use condoms. So we started targeting our programme at the clients instead," explained Suresh Purushothaman, an ARFI volunteer. In contrast, South India AIDS Action programme (SIAAP) focusses on prostitutes. Says Shyamala Nataraj, who heads the group, "The basic premise for behaviour change is that there should be consistent information, adequate support structure and a conducive social and economic environment. We try to provide prostitutes with the first two and hope through our larger efforts that society's attitude towards prostitutes and HIV patients would change. We have seen women are the backbone of all development programmes and so our thrust is on empowering the woman."

SIAAP also runs a programme to educate truck drivers from a booth set up at Puzhal, on the Andhra Pradesh-Tamil Nadu border. SIAAP's thrust is on trying to get NGOs working in rural development to start AIDS prevention as part of their on-going programmes.

In mid-1986, doctors at the Christian Medical College (CMC) in Vellore detected the HIV virus in the blood of a couple and one other person, none of whom was involved in commercial sex. The issue became public and the husband tried to commit suicide. The social problems faced by all three convinced CMC specialists that the department of psychiatry, of which Dr Jacob K John is a key figure, must be involved in the AIDS programme. Among the activities that John has spearheaded at CMC are AIDS prevention training for public health centre personnel involving parish priests in AIDS education and extending to barbers because "a barber has a man inmobilised in front of him for at least 15 minutes and barbers are traditionally considered to be a repository of sexual information." John's plans include issuing CMC certificates to trained barbers and getting them to stock and dispense condoms.

At Madras Medical College (MMC), Drs M Ganapathy and Suniti Solomon recalled that when they started their AIDS campaign in 1986 their fellow-doctors were their worst enemies because they simply refused to believe that the disease would become a major concern. Now the AIDS Control Programme Resource Group at MMC sends out an AIDS newsletter to all government doctors in the state and operates an AIDS hotline for the public.

All these groups have helped greatly in raising popular awareness in Tamil Nadu about the disease and its prevention. This is a valuable intervention at a time when the country gears itself to meet the challenge of a possible AIDS epidemic in the future. According to the Union ministry of health and family welfare, a February 1992 screening of a little over 12.73 lakh persons in the "at risk" category revealed that about 6,600 of them were HIV positive.