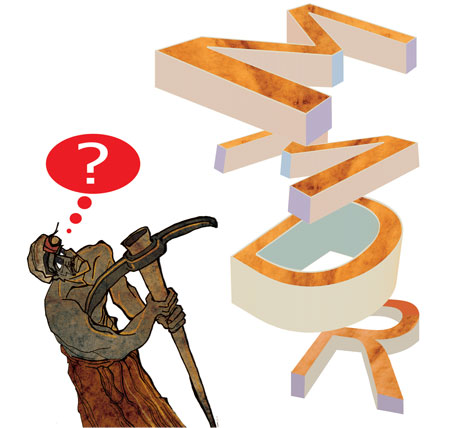 SOON AFTER President Pranab Mukherjee signed the ordinance to amend the archaic Mines and Minerals (Development and Regulation) Act of 1957, Union minister for steel and mines, Narendra Singh Tomar, announced it is a revolutionary step towards reviving the country’s mining sector.

His ministry highlighted that the Mines and Minerals (Development and Regulation) Amendment Ordinance, 2015 will address problems that have been plaguing the sector for long. These include granting mineral leases in discretionary, non-transparent and delayed ways, problems in renewal of mining leases, illegal mining activities, reluctance to undertake exploration and investment in the sector, and grievance of the civil society that the mining-affected people are not cared for. But these problems are not new and ways to address most of them have long been debated by the country’s intelligentsia. This includes the report of the High Level Committee on National Mineral Policy in 2006 by the Planning Commission. In 2011, the then government led by the United Progressive Alliance (UPA) introduced a bill to reform MMDR Act, 1957 which later lapsed.

So, what was the urgency behind introducing an ordinance? Is it to reform the sector, as highlighted by the mines ministry, or to give an impetus to the mining sector, by expediting and expanding mining leases? The ministry has several times acknowledged that delays in granting mining leases has been a major factor for “significant reduction in the output of the mining sector”. Sources say the Prime Minister’s Office has already announced a deadline of March 10 to begin the first phase of auctioning of non-coal mines.

Auction is the buzzword

The ordinance introduces a provision to grant all mineral concessions through auctioning. However, auctioning is hardly a one-size-fits-all solution.

It is the best way to allocate mineral concessions where mineral deposits can be accurately established and a proper valuation can be done. This will help the leaseholder capture the windfall profits as well as bring in transparency in the allocation process. However, in cases where mineral deposits are not properly established, auctioning can lead to problems like undervaluation of minerals, leading to lower revenue generation for the government, or overvaluation, resulting in the inability of the concession holder to meet commitments. This will lead to uncertainties in case of prospecting- cum-mining leases.

If auctioning has to be done for prospecting- cum-mining leases, it can only be done for bulk minerals, such as iron ore, bauxite and limestone that remain deposited close to the surface, and where substantial exploration work has been done by state agencies. For deep-seated minerals, which require highly specialised human and technical resources and is capital-intensive, “first-in-time” principle (whoever first applies for prospecting permit) is the most certain way of granting mineral concessions.

Revenue, but at what cost?

The prime objective of auctioning is to get more revenue for the state government. While this is fair enough, focus on revenue maximisation can lead to a race to the bottom, wreaking havoc on the environment, ecosystem and people.

Environmental concerns increase further when one considers the kind of unscientific and inefficient mining practices the ordinance encourages. While the MMDR Act grants mining leases for maximum 30 years and allows it to be renewed for up to 20 years, the ordinance grants leases for 50 years without any provision for lease renewal. This also applies to existing mines. Worse, the ordinance puts a special emphasis on extending the mining lease of captive mines. Promotion of captive mines would only aid poor environmental performance of industries owning the mines. 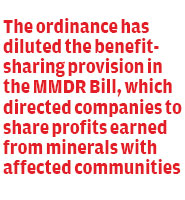 Analyses by Delhi-based non-profit Centre for Science and Environment (CSE) for the cement sector in 2005 and steel sector in 2012 show that environmental performance of these sectors largely depends on the way they source raw material from their captive mines. While cement companies were reluctant to invest in proper management of mines, steel companies were hardly developing technologies for efficient use of raw materials.

Besides, captive mine allocations involve unscrupulous activities. The Supreme Court, in its August 2014 judgement on the coal scam, noted that the way in which coal blocks were allocated to private parties for captive mining was highly “ad hoc”, due to which “common good and public interest suffered heavily”. Given the inefficiency and non-transparency in allocation and functioning of captive mines, the government should ensure that new allocations are made through “open auction” following proper exploration of minerals.

The ordinance has done away with the provision of renewal of leases. Given that assessment and monitoring of mines are weak in India, such a provision in the MMDR Act offered an opportunity to assess the performance of mines, both in terms of productivity and environmental impact. A long lease period without any provision for periodic audit would further impact regulatory supervision.

So, a mechanism must be put in place to ensure intermittent assessment of a mine’s performance. The ordinance further states that mines will be re-auctioned after the leases expire. This will discourage leaseholders from investing in progressive closure and rehabilitation of mines. The long duration of the lease will also make it difficult to estimate and establish appropriate financial guarantee to ensure that mine closure will happen. This will encourage the practice of “dig and run”, adding to the burden of abandoned mines.

As per 2010 estimates by the Indian Bureau of Mines, there are 297 abandoned mines of major minerals. This does not include abandoned coal mines, which, according to a 2008 analysis by CSE, number at least 240. However, this could still be a gross underestimation of the scale of the problem. Former Union environment ministry officials acknowledge the poor documentation of abandoned mines. In December 2014, responding to a Lok Sabha question on the status of abandoned mines, the Ministry of Mines stated that there are 5,028 non-working mines and that there is no “separate classification” of abandoned or sick mines.

It is not just the environment, the ordinance also brushed aside the concerns of mining-affected communities. According to the Union Ministry of Tribal Affairs, 90 per cent Union Ministry of Tribal Affairs, 90 per cent of the 104 million poor tribal people in India traditionally live in mineral-rich forest areas. So far, no law addresses this dichotomy or directs companies to share profits earned from mining activities with the community. In 2008, CSE had initiated this equity debate, which prompted a nation-wide conversation on environmental justice in mining activities.

In 2011, the Ministry of Mines recognised the problem in the Sustainable Development Framework formulated for the mining sector by saying that “in recent decades, mining activities have resulted in little local benefit”.

To undo this historical injustice, the ministry that year introduced the MMDR Amendment Bill in Parliament. The Bill specified that for mining for major minerals, the leaseholder shall pay the district mineral foundation (a non-profit body set up by the state government) “an amount equivalent to the royalty paid during the financial year” annually. For coal and lignite, it was to be an amount equal to 26 per cent of the profit after tax.

The benefit-sharing provisions have been diluted in the ordinance. Leaseholders are now required to pay not more than “onethird of the royalty” from the respective minerals, in addition to the royalty paid to the state. A back-of-the-envelope calculation shows that this will be a 20 per cent reduction in the funds made available to the community. CSE analysis shows that under the profitsharing provision of the MMDR Bill, the community would have received Rs 10,500 crore a year. Going by the ordinance, they will receive Rs 8,320 crore a year at the most.

The MMDR Act empowers the Centre to extend a mine lease up to 10 sq km for “development” of any mineral. The ordinance extends this discretionary power for development of an industry. With no specification on the extent to which the area can be extended, large areas can now be leased out to cater to industrial demands.

The increase in size of the mine lease area will effectively mean more displacement. An analysis by CSE shows that since the beginning of the 11th Five Year Plan in 2007, the area leased out for various mining activities can potentially displace more than 800,000 people. This is a gross underestimation as displacement- related information is not available for many projects.

Less benefit with the potential for more displacement only perpetuates the exploitation by mining companies. The distrust and anger of the dispossessed is evident in the uprisings in the forested and economically backward mining areas of Chhattisgarh, Jharkhand, Odisha and Andhra Pradesh.

Though provisions of the ordinance may help the mining sector earn short-term gains, it cannot remain immune for long.

The ordinance will hurt the sector in the long-run by limiting innovation and investments, required to ensure optimum exploration. It promotes “open sky” policy (opening up the scope of exploration) by granting non-exclusive permits, but does not guarantee any return to the investors. To ensure returns the government should adopt the “first-in-time” principle.

The ordinance has proposed setting up a National Mineral Exploration Trust, which will be created with the two per cent royalty paid by leaseholders. This will at best create a corpus of Rs 500 crore (about US $90 million). The amount will not be sufficient for exploration of strategic minerals required for electronics, renewable energy and advanced energy storage. Australia, with a similar potential of mineralisation, has an exploration budget of about US $3 billion. Limiting the scope of exploration will prompt companies to cherry-pick mineral deposits close to the surface, such as bulk minerals, and deepseated minerals, such as base metals, noble metals, rare earths, will remain unexplored.

The government needs to promote both public and private sectors for exploration works. The ordinance is also weak at curbing the numerous illegalities that plague the mining sector. These include over-extraction of mineral ore, illegal selling, export and transportation of ore; removal of ore from overburden dumps and selling them without state approval; mining outside the lease area; unscientific and unregulated practices in smallscale mines; and carrying out mining in officially closed mines. Tackling the situation requires strengthening the regulatory institutions and mechanisms. But the ordinance calls for increasing penalties for any violation under MMDR Act, and creation of special courts for speedy trial of mining offences.

Instead of strengthening institutions and improving governance at the state level, the ordinance allows huge scope for interference by the Centre. Though it allows the state to grant leases, the power to determine terms and conditions for bidding and auctioning remains with the Centre. The Centre will also have the power to direct the state on implementation of various provisions of the MMDR Act. This is in addition to its power to revise any order passed by the state with respect to minerals other than minor minerals. With the Centre having such overriding powers, states no longer remain equal stakeholders in mining governance.

The ordinance has failed to take into consideration the need for reforms to improve governance in the mining sector. It also undermines the spirit of co-operative federalism, much championed by Prime Minister Narendra Modi to ensure good governance. There is no doubt that our existing regulations and institutions need reforms to deliver better results on the ground. The country needs a new law and a reformed regulatory mechanism. However, the Act must be formulated not only as a mechanism for aiding mining, but to ensure a sustainable mining future, balancing the needs of people, the environment and economy.

With inputs from Manavi Bhardwaj