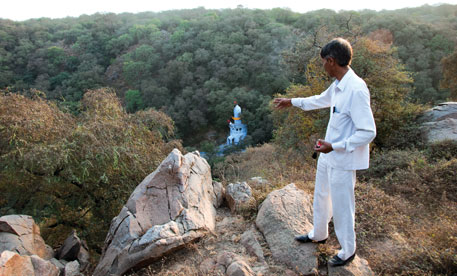 Sitting in a chaupal, Fateh Singh Harsana of Mangar village in Haryana’s Faridabad district looks intently at a piece of paper. It is a petition to the forest department from people of his village. Singh, popularly known as Fatra, hopes to undo a 30-year-old mistake by signing the petition.

In the 1970s when the government allowed privatisation of the village commons, Fatra, like most people in his village, got a share. In the 1980s, he was among the many Mangar residents who sold their share without knowing the actual location of their holding. They now regret the transactions, which allowed private investors a toehold in an about 200-hectare (ha) patch of revered forest in the Aravallis, one of the oldest mountain ranges. They are now petitioning for government protection for their sacred grove, one of the last patches of native Aravalli vegetation near Delhi. They and people from neighbouring Bandhwari and Baliawas villages have protected the patch for centuries in memory of Gudariya Baba, a saint who, they believe, attained moksha (salvation) in the Bani. Harming the forest, which they call Bani, would incur the Baba’s wrath, they believe.

After the sale the grove remained untouched because most buyers were speculative investors and the plots were not demarcated on ground. The people did not allow anyone with the intention to acquire land to enter the Bani, so land prices remained low. But things have changed now. In July this year, the Haryana government drafted a master plan to develop 10,484 ha around 23 villages in the Aravallis in Faridabad, including Mangar. The Mangar Draft Development Plan (DDP), 2031, proposes developmental activities, including construction of residential or industrial colonies, farmhouses, communication towers, hotels, railway stations and airports. Even lime and brick kilns, and stone quarrying and crushing are sought to be allowed.

Environmentalists fear the plan, if approved, will open floodgates for real estate and harm the ecologically sensitive zones in the Aravallis. “If real estate development happens in the region the land prices will increase and market forces could threaten the sacred forest,” says Chetan Agarwal, who has studied the ecological benefits of Mangar Bani and the surrounding Aravalli hills.

Ninety-five per cent of the Bani comprises a slow growing tree, dhau (Anogeissus pendula). The surrounding area is dominated by vilayti keekar (Prosopis juliflora). “Dhau has a unique feature. If it is nibbled by cattle, it spreads out on ground or over rocks like thick, prostrate undergrowth. If left undisturbed, it grows into a middle-sized tree,” says Pradip Krishen, the author of Trees of Delhi. The 13-metre-tall dhaus in Mangar Bani testify to the forest’s antiquity, he adds. Agrees elderly Fatra: “Nobody knows when our ancestors began protecting the Bani. My grandfather told me all his life he had seen the dhau trees as tall as they are today,” he says. 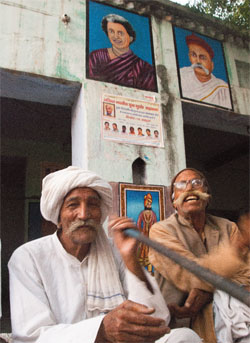 The village abounds with stories suggesting Gudariya Baba’s protection of the Bani. Bharatraj Harsana, a resident, recounts, “Once a few Rabaris from Rajasthan took their camels inside the Bani to graze. The animals started lopping dhau branches. Baba’s spirit told the Rabaris their camels were eating his hair and asked them to go away. The herdsmen ignored the warning. Soon their camels started dying. Since then no Rabari has taken his animals into the Bani for grazing.”

“Whenever someone took wood from the Bani for building a house, or for fuel, his house got burnt,” adds Balwant Ram, another resident. People in Mangar believe the Baba’s spirit would help them tide over the current predicament. “A real estate company that owns land in the Bani tried to acquire it a few years ago. It failed,” says Chandraraj Harsana of Mangar. “If anybody comes to acquire the land, he will have to overpower the residents of three villages.”

The villagers, however, do not want to take a risk. They have formed a village development committee, which has prepared the petition asking the forest department to acquire the Bani land from its current owners. “With the government planning development activities around the Bani, the younger generations might not protect it,” says Sunil Kumar, the secretary of the Mangar Gram Vikas Samiti.

Kumar’s fear stems from the fact that the Bani has had no legal protection so far. The Mangar DDP says no construction will be permitted on the land falling under the Punjab Land Preservation Act (PLPA), 1900, and in the area under plantations in the Aravallis protected by the Supreme Court’s direction. The Bani and surrounding hills fall under neither. Sanjeev Mann, assistant director of Town and Country Planning in Faridabad, though, says any area that comes under the Supreme Court’s definition of forest, including the Bani, will be protected even if the draft DDP does not provide for it. But Krishen believes, “Even if they leave the Bani aside, it will not survive if development creeps up to the rim of the valley. There has to be a proper buffer zone. Its ecology is fragile and irreplaceable.”

Initially, the newly privatised land was jointly held by the shareholders, with each family having a title showing the extent of land in its share, but not the location. “Outsiders allured us to sell the hill. Nobody knew where his land was. It was sold only on paper,” recollects Jairam Harsana of Mangar. In 1986 began chakbandi, the process of marking individual tracts on the village map. “It is then that we got to know that the whole hill, including the Bani, has been sold. Had we understood this, each one of us could have kept some land reserved on paper for the Bani”.

The Aravalli hills in the region were the target of miners and real estate speculators till 1992, when an environment ministry notification banned construction activities without the ministry’s permission in the ranges in Gurgaon and Alwar district of Rajasthan. The hills in Faridabad got protection only in 2002, when the Supreme Court stopped mining and pumping of groundwater within 5 km of the Delhi-Haryana border.

Ban on construction in Gurgaon made Faridabad an interesting prospect for real estate. Mangar, at a stone’s throw from Gurgaon and Delhi, and with its huge chunks of common land, was a prize. “Under pressure from land owners and land sharks huge chunks of planted land are shown outside the protected plantations,” alleges R P Balwan, former conservator of forests in Gurgaon who raised his voice against the parcelling out of the Aravalli land. Between 1989 and 2010, the Haryana government declared 10,484 ha near the village as controlled area through notifications under the Punjab Scheduled Roads and Controlled Areas Restriction of Unregulated Development Act, 1963. The Act enables the government to reserve the land within 8 km on the outer boundaries of towns for planned urban development. Mangar DDP followed.

“Many influential people, including Central government ministers, cricketers, media barons and babas, own land in the region,” says a conservationist who does not want to be named. Land prices shot up once the news of the draft plan broke. “An acre (0.4 ha) in the hills sold for Rs 15-18 lakh a year ago. It has now doubled,” says a property dealer in the region. The conservationist, however, warns that land sales in the region can easily be challenged in the court.

The 2002 ban on mining and pumping of groundwater gave some respite to the ecology of the Aravallis. A 2008 report of the Central Ground Water Board mentions that between 2003 and 2008 groundwater levels around Mangar, Gothera Mohbatabad and Pali hills in Faridabad district rose by 1.19 m to 8.15 m. NCR Planning Board’s Regional Plan 2021 identifies parts of these hills as important recharge zones and states that the hilly, rocky region should be marked as a Natural Conservation Area. The Mangar DDP, in contrast, brackets the plains and the hills together and opens them for construction.

In 2009, a report of the Central Empowered Committee, which advises the apex court on forest-related matters, said Mangar Bani should be acquired by the government of Haryana, but nothing has happened on that front. The state government also did not form the committee for identifying the forest-like areas in Haryana and notify them as deemed forest as required by the 1996 Supreme Court order. The forest department alleges it was not consulted by the Town and Country Planning department when the master plan was drafted. “A continuous patch of forest starts from the Asola wildlife Sanctuary in Delhi, covers Ananthpur and Mangar and ends at Kot in Rajasthan. Animals from the Aravallis in Rajasthan stray here,” says a forest officer in Faridabad.

Agarwal says the Mangar DDP in its current form should be scrapped. “If its provisions are allowed, the Aravalli hills will be fragmented into thousands of properties. Developers will build boundary walls, stop movement of wildlife, destroy the rare flora and sink thousands of deep borewells,” he says.