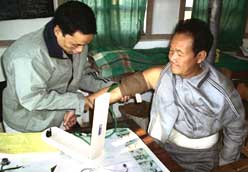 In November 2005, the Arunachal Pradesh government selected four ngos to run 16 of its 85 primary health centres (phcs). The list included only one local ngo, Future Generations Arunachal Pradesh (fga), which is headed by chief minister Gegong Apang's son, Omak Apang. The Karnataka-based Karuna Trust, the New Delhi-based Prayas Juvenile Aid Centre Society and the Voluntary Health Association of India, together cornered 15 of the phc s. This sidelining of Arunachal-based organisations has become cause for much discontent.

Kabak Tacho, president of the state Nationalist Congress Party, claims the selection and screening of ngos was done in New Delhi and that the Arunachal-based ngos were completely sidelined. "Community-based ngos can run the health centres far better than those from outside the state," he contends. Tacho adds that the selected ngo s will receive about Rs 30 lakh per year per health centre.

What has miffed people like him is that most of the selected ngo s hardly have first-hand experience of the state. "Instead of allotting five phcs to Karuna Trust, a few of these could have been allotted to local ngos, says Tacho. Even the selection procedure is questionable. Says Biman Natung, head of the Voluntary Health Association of Arunachal Pradesh, the state chapter of the vhai, fga was selected because the chief minister's son, Omak Apang, himself an mla, heads it," N atung said.

The government obviously denies any breach of proce-dure. The joint director of Arunachal's health services and state head for the project, T Basar, justified the move stating, "Karuna Trust is a reputed ngo, which successfully runs phcs and dispensaries in Karnataka." He denies any fears that ngos might not conform to their memorandum of understanding (mou), since there is a get-out clause in the contract. According to the mou, ngos shall provide comprehensive health services to the local population, by engaging its own staff, preferably local people, for round the clock access.

In the past few years, the state government had established 85 primary health centres with four sub-centres each, but infrastructure was inadequate, both physically and in human terms. Given the magnitude of the problem, Natung stepped in with a proposal to privatise health care. Although the proposal raised quite a few eyebrows in the political and voluntary establishments, Anshu Prakash, the then state commissioner of health and family welfare, deputed D Padung, deputy director, maternal and child health, to work out the modalities. A public-private partnership project thus evolved.

The government thereafter invited expressions of interest in August and by November a disparate list was finalised: four ngos selected to run 16 centres, with one getting the charge of nine (see table: Undue favours), and all but one with significant working experience in the state, the fga. Incidentally, Natung, the so-called originator of the project, was left out in the cold.

Natung casts serious doubts over the selection procedure. The criteria for selection were not clear, he said, adding that the proposal was to select health centres in remote and inaccessible places, where they were almost defunct. But the health department earmarked centres with workable infrastructure.

Even the general populace have doubts. Addressing their concerns, Padung said, The main apprehension regarding privatisation was that people would have to pay for all the services but it is not so. Below-poverty-line patients would not need to pay under any circumstances. He made it clear that a management committee would also be constituted. The committee would essentially be responsible for guiding and monitoring the day-to-day functioning of the centres.

It is not clear whether privatisation in the health care sector will work, but what is clear is without transparency, even the best of intentions will not meet with success.