Unravelling science for the lay person

NCSTC-Network, a voluntary organisation, links and helps smaller organisations working to demystify science for the masses and dispelling blind belief in miracles wrought by godmen

Unravelling science for the lay person 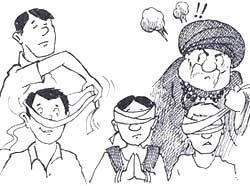 HUNDREDS of small voluntary organisations across the country have dedicated themselves to simplifying the mysteries of science for amateurs and giving them hands-on experience in the subject. NCSTC-Network, a voluntary organisation set up in 1991, has linked 50 such people's science organisations and some government bodies, including the computer section at Doordarshan and a few state science and technology councils.

Though the Network was set up by the department of science and technology's National Council for Science and Technology Communication (NCSTC), it is financially independent. Member organisations must have at least two years' experience in science communication, which should be their primary objective and well evidenced by their activities; have plenty of field experience, and should have received no foreign funds.

Network chairperson Narendra Sehgal says, "We are catalysing our members to popularise science and indigenous technology. With the exposure, training and work-support we give them, these organisations will be able to work more effectively and among larger sections of society."

Science activity kits, periodicals and video films developed by the member organisations will soon be widely circulated by the Network's distribution channels. Says Soumya Datta, convenor of Network and member of the Science Communicators Forum in Calcutta, "NCSTC-Network enables pooling of expertise from all the organisations. Joining Network has spread our horizons."

Network's latest activity is the National Children's Science Congress, whose theme is "Know Your Environment". The science congress, which will be conducted at the district, state and national levels, will involve children in projects such as a drawing a tree map of their locality, a social profile of their habitat and drinking water and land use surveys.

"Science must be related to real-life situations," explains Sehgal. "The best way to develop scientific temper is to inculcate the spirit of curiosity and questioning, which is what the Congress aims to achieve."

The "Science Behind Miracles" programme, in which members developed a kit to explain so-called miracles and then undertook shows and workshops countrywide to dispel blind belief in godmen, has been one of Network's most successful activities. The Gwalior Science Centre, a Network member, set up Nidan, a centre for the documentation, research and demystification of these miracles. Network is also bringing out a set of three books, called Seeing Is Not Always Believing, which describe common tricks practised by godmen.

Network members are also working on a popular science bibliography project, which will collate science literature and magazines in different regional languages.