Amid the gloom surrounding RJF data, an experiment in Haryana gives some hope 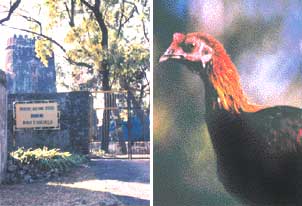 According to the World Conservation Union's listing, the bird is safe and secure. But it appears in India's Wildlife (Protection) Act, 1972, as a Schedule IV species -- no hunting of the bird is permitted. "Until now, rjf was considered as 'not globally threatened'. But in the light of our present knowledge, we think that 'seriously endangered' would be a better qualification," says Pinceel. "Normally one should think there are enough populations left in the huge area in which they occur, but the major question is of purity. The problem is that there are a lot of red jungle fowl like birds, but perhaps they are seriously infected with domestic genes," he says.

Amid the lack of awareness and neglect of rjf in India, there is but one effort in saving the fowl that stands out -- the captive breeding programme of rjf in Morni Hills, Haryana, undertaken by the Haryana State Forest Department. Started in 1991-92 with some local stock of rjf and eggs that were collected from the jungle, the stock is kept in an enclosure. In 1998, they successfully introduced 14 birds in the wild followed by seven in 1999.

Though the reason for starting the project was not out of concern for rjf per se, now the objective has shifted to reintroducing mature birds in the wild and replenishing the wild stock. S K Khanna, a veterinary specialist with the Government Poultry Disease and Feed Analytical Laboratory, Ambala, Haryana, explains the reason behind their objective. Habitat destruction and consequent decrease in rjf numbers could lead to an increase in some insect population, which make up a part of the rjf 's diet. The Morni Hills project will thus give a chance to scientists to study the impact of rjf on insect population and the health of the population living in areas where there is human-jungle interface. They can also study the productivity and immunoresistance capabilities of the fowl. "This is a long-term project. To begin with, we have been slow because of lack of technical skill and funding," says Khanna. "But as of now, there are no studies to show that decrease in rjf population could lead to subsequent increase in insect population," says Kaul.

According to Satya Kumar, the Morni Hills stock is healthy and shows all the traits that the pure jungle fowl has. "We can say that the stock is relatively pure," he says. With a healthy population of the rjf in the nearby Kalesar reserve forest, the Morni Hills programme does seem to hold some promise for research on the rjf . "We are planning set up sub centres as well and we are also trying to analyse and clear all the proposals for research that are given to us. As the genetic contamination issue is very important now, we have to look into every aspect of rjf ," says P R Sinha, member secretary, Central Zoo Authority, Delhi.

According to Pinceel, the Wildlife Institute at Bologna, Italy, is also working on a large World Pheasant Association project, particularly the four species of jungle fowl. One of the most important aims is to find a method to recognise hybrids from rjf . But wildlife samples for taxonomic studies are not allowed to be exported from India. "This would somewhat slow the research work which is in progress in various labs, because these laboratories will miss important reference samples. It would be important if dna research on rjf could be implemented in India, perhaps in collaboration with other laboratories throughout the world," says Ettore Randi, Pinceel's colleague.

Meanwhile, in the us , companies are already making headway in genetically modifying chicken to suit market demands. Many are worried that this may further threaten the purity of the original fowl (see box: Fowl play ).