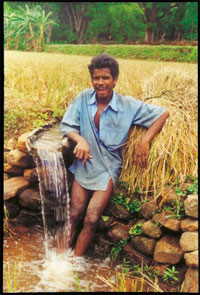 Where the spacious black topped 20-km long road ends, India ceases and the republic of Nimalapedu starts. Life takes a different meaning altogether: “Here people rule,” says Sambhu Pollana, the head of the village’s gram sabha. The 200 residents are busy harvesting their first crop of paddy in June, unmindful of the fact that the state’s one-third villages have been declared drought-stricken.

“We have to prepare for the second sowing immediately,” adds Pollana. Three crops a year and a kitchen garden in each household make the village prosperous; so much that once it told the district collector that the village would feed him and his hundreds employees for a month.

Pollana should know it better. In 1992, his village was threatened to be bulldozed by the earth-removers of a private mining company to extract bauxite. He was told to move out of the village and to settle somewhere else. But a brief meeting of the residents changed the course of their life. “We can’t move without the perennial stream and the few tamarind and mango trees,” the village meeting decided. Thus began a fouryear- long legal battle to throw out the mining company from Pollana’s village.

In 1996, the Supreme Court gave its verdict: In the Fifth Scheduled areas, nothing can be taken without the consent of the gram sabha. The gram sabha didn’t give the consent to the company. The company had to abandon its Rs 250 crore investment and Pollana declared sovereignty. Since then nobody from the government visits the village. “The biggest lesson is how to govern,” says Karingi Ramana, a resident.

That spacious black-topped road, built by the mining company to transport bauxite from the mines, remains a metaphor for the village’s ‘independence struggle’. Nobody walks on that road and it is used for husking and drying paddy. “We don’t have to use it for walking as hardly we go out. Our own resources are enough to have a surplus economy,” says Ramana.

The village now harvests three crops and has earmarked all the fruit bearing trees with estimates of their annual economic value. A tamarind tree fetches Rs 1,500 every year, a mango tree fetches Rs 2,000 and the jackfruit tree has unlimited value as they form the common food pool for the monsoon. A small stream has been diverted into the village to supply water. Residents have made their own canal using bamboo and wooden pipes to take water to their fields. “The income from agriculture is sufficient so that the village has decided to give land to the six landless families on lease with nominal fee of few kilogrammes of tamarind and mangoes,” says Bala Raju, the village’s first college going resident. “My education will also be taken care of by the gram sabha,” he says.

Education, it seems, is the republic’s next agenda. The gram sabha has opened a primary school and the curriculum includes self-governance. “While learning alphabets the first word we teach them is ‘village’,” says B Rama Naidu, the teacher. The school opens whenever the students are free from cattle herding or feel free to study. It is not recognised but the importance of the village is that the next generation will know about the village’s rebirth. So it is not a matter of shame when none of the residents, including the teacher, could tell when is India’s Independence Day.