Oriyas fight winters with a delicacy covered in turmeric leaves 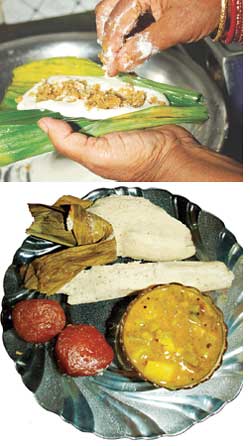 The earthy sweet aroma of haldi patra pitha on a winter morning makes me nostalgic like every non-resident Oriya. The delicacy is the speciality of Prathama Ashtami, a festival that falls on the eighth day after Kartik Purnimathe full moon day in late October or early November that heralds the winter season.

I vaguely remember the tales associated with the festival. But the memory of my mother and aunts fervently invoking God to bestow good health on children and the overwhelming aroma of the pitha are still vivid. The puja ends with the distribution of the pitha. Children, patient till then, fall over themselves for the sweet. The key to good health, says my mother, lies in the pitha. The sweet dish, also called enduri pitha, is wrapped in green turmeric leaves before it is steamed. The leaves impart a subtle flavour to the batter and infuse nutrients into the pitha. These nutrients help us stay fit during winters, she explains.

Agrees Mayank Tiwari, ayurvedic doctor with Patanjali Chikitshalaya in Delhi. Every part of the turmeric plant (Curcuma longa), be it the rhizome, the flower or the leaf, has medicinal properties. Its active ingredient, circuminoids, has antioxidant and antibacterial properties. It boosts the bodys immunity and staves off flu and eases cold, said Tiwari. Circuminoids also assist digestion and protect against ulcers, he said.

Turmeric leaves are rough and not pleasant to eat. Perhaps this is the reason the recipe was invented, said Purnachandra Sahu, sous-chef at Mayfair, a five-star hotel in Bhubaneswar. Though turmeric is an integral part of Indian cuisine, people nowadays do not eat it right. Thats where tradition helps; it makes obligatory to use lots of turmeric leaves just when they are needed for warding off chills and agues, he said. Orissas vegetable vendors sell the leaves a couple of days ahead of the festival, but my mother prefers growing it organically in her kitchen garden. It is usually planted before the rains begin and are fully grown by early winter. The idea of the festival was probably not to waste any part of the turmeric plant, said Rabi Kanungo, a columnist. So before the leaves start wilting they are plucked to prepare the delicacy.

While the leaves prevent flu, the pithas filling keeps the body warm, said Sahu. For diabetics, the pitha can be made without the filling and can be served with a curry of choice. As the chef puts it Those who have tasted the pitha, long for it.
Features Traditional Knowledge Traditional Knowledge Spices Spices Orissa Nutrition Nutrition Health Agriculture Italy Genetic Engineering News Briefs
Donate Now