Upholding the right to hygiene

The citizens of Ratlam in Madhya Pradesh continue to put up with a filthy, malodorous town despite a landmark Supreme Court ruling 13 years ago, which held it mandatory for municipalities to provide sanitation facilities.

Upholding the right to hygiene 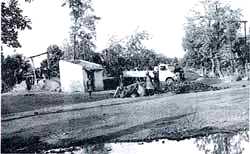 IN A LANDMARK judgement in 1980, the Supreme Court (SC) ordered Madhya Pradesh's Ratlam municipality to clean a locality, holding that budgetary constraints didn't justify a municipality neglecting its statutory obligation to provide sanitation facilities. It also made it mandatory for a magistrate to remove a public nuisance wherever one existed.

The Ratlam municipal corporation has taken 13 years to implement partially the SC ruling on improving civic facilities in the posh Shastri Nagar area, but the residents are not satisfied. Meanwhile, in other localities of the town, citizens continue to put up with the municipality's indifference in the form of pollution.

Says 80-year-old Vardhichand Porwal, the advocate who filed against the municipality in 1963 the first ever public interest litigation filed in the country, "There's hardly been any relief. In fact, the environmental problems have multiplied here over the years. Rapid industrialisation and careless discharge of effluents have polluted the groundwater, bred diseases and generated a foul stench."


Porwal complains, "I didn't know an order that was acclaimed by the International Commission of Jurists and by Indian environmentalists as a landmark judgement for environment protection would fail to solve our problems."

Porwal filed the case in the local magistrate's court after Shastri Nagar residents failed to persuade the municipality to clean the open kuchcha nullah, which was choked with industrial effluents. He contended the municipality was neglecting its duty and argued the raison d'etre of a civic body was to provide regular service to its citizens, from whom it claimed regular monthly taxes. The magistrate ruled against the municipality, but his order was later reversed by the sessions court.

In the legal battle that followed, the case went to the Jabalpur high court, which upheld the magistrate's order, upon which the municipality petitioned the Supreme Court. But Justice V R Krishna Iyer also upheld the magistrate's order and dismissed the municipality's petition saying, "Ratlam is an area where prosperity and poverty live as strange bedfellows. The rich have their bungalows and toilets, the poor live on pavements and use the roadsides as latrines in the absence of public facilities. And with the city fathers being too busy with other issues to bother about the human condition, the well-to-do citizens' demand for basic sanitation and public drains fell on deaf ears. Another contributory cause to the insufferable situation was the discharge from the alcohol plant of malodorous fluids into the public street. The local denizens, driven by desperation, at long last decided to use the law and call the bluff of the municipal body's indifference to its basic obligations under Section 123 of the Madhya Pradesh Municipalities Act, 1961."

However, despite the SC order, things haven't improved much in Shastri Nagar. Porwal sums up the steps taken by the civic body: "The municipality interpreted the SC order to mean its task would be finished once a pukka nullah was built and kept clean for the drainage of the locality. Earlier, the open drains bred diseases and polluted the nearby Kurel river, the source of drinking water for numerous villages in the area. But in a sharp departure from the judgement, both in the letter of the law and in its spirit, other problems like garbage pile-ups, cesspools, drain pits, open urinals, waterlogging and open discharge from industrial units, which have grown in number in recent years, were left unsolved."


Ameen Ansari, a resident of the Shastri Nagar slum, which is located downstream from the nullah, says, "More than 200 households are living in this slum and they use the nullah for defecation because there is no public toilet nearby."

Says Porwal, "The SC order about the drains was finally implemented in August this year, only after three contempt notices were slapped against the civic body. But because of the substandard work done earlier, which soon fell apart, the state of affairs has not improved a bit. This was despite the order, which specified the municipality will not merely construct the drains and fill up cesspools, but also use its sanitary staff to keep the place free of filth." In fact, Krishna Iyer had said, "After all, what the municipality lays out on prophylactic action is a gain on its hospital budget."

But municipal commissioner R C Mishra, who assumed charge in 1991, says, "Things have certainly improved, although not significantly, because ground realities have changed. The population has tripled; industrial plants have come up in great number; slums have proliferated and, above all, a modern sewer system is needed to keep the city clean."

Mishra says the municipal body failed to carry out earlier the work ordered by the SC because of acute paucity of funds, despite the judgement stating that budgetary constraints didn't give civic bodies the licence to ignore their statutory obligation to provide sanitary facilities. "But now," he says, "our situation has improved. This year's budget is Rs 7.56 crore and we have elaborate plans to improve the civic facilities in the town."


Says A P Bhatnagar, legal counsel to the municipality, "A major pollutant adding to Shastri Nagar's woes is the state government-owned alcohol and carbon dioxide plant." Set up in 1963, the plant produces more than 11,000 litres of ethyl alcohol and releases almost 200,000 litres of effluents daily. Molasses being the plant's key raw material, the effluents flowing through the colony nullah give off an awful stench.

The SC had ordered the municipality to take immediate action to stop the effluents from the plant flowing into the street. Krishna Iyer had remarked, "Industries cannot make profit at the cost of public health." But though some efforts have been made to check the effluent flow, some residents and municipal officials say even today the plant partially releases its effluents into the nullah, which flows into the nearby Kurel river.

Although the plant has been closed for the last three months following a controversy over the decontrol of molasses, Lokendra Tripathi, a state pollution control board scientist based in Ratlam, says, "Initially the plant used to release its waste recklessly, but it has now installed a waste treatment plant and a methane digester, which will become operational as soon as the factory reopens."

But extensive damage has already been done. Besides the alcohol plant, many big industrial units that have been set up in recent years have been recklessly releasing their wastes into the open field and nullah linked to the Kurel river.

Dilip Patni, a resident, says, "The unchecked effluent discharge has rendered the source of potable water unusable in more than 16 villages. The worst sufferers are Jadawasa, Khurd, Ghatla, Bhatuni, Simaulada, Dosigaon and Sejawata, where even tubewell water has become yellow." A resident of Jadawasa village, speaking on condition of anonymity, says, "We have protested against these plants before the collector's office, but the administration doesn't seem keen to work out a permanent solution to the problem." He contends many cattle deaths have been caused by the effluents, but no compensation has been paid.

Tripathi says, "More than 1,300 households in 16 villages have been seriously affected by the careless discharge of effluents. For the water-starved villagers, the crisis becomes acute in summer and then, some of the industrial units and the administration provide water in tankers. But the allegation of cattle deaths are false." He says that with stricter enforcement of environmental norms, things have begun to change.

In Ratlam itself, some industrial units that have come up in residential colonies in recent years have become a potential menace. Requesting anonymity, a senior nun at the St Joseph Senior Secondary School in Mitra Niwas Colony says, "Shaba Chemicals Pvt Ltd and the Straw Board factory located behind the school buildings, are a health hazard for our students, particularly little children, who fall sick because of the foul-smelling gases these units often release."

Says Nirmala Jayant, a resident of Mitra Niwas colony, "Gases are released almost eight times a month. The stench becomes intolerable, particularly during the rains. The colony's residents association filed a complaint with the administration about six months ago, but no steps have been taken yet."

Tripathi, however, refutes the charges and says, "It's wrong to blame Shaba Chemicals, which produces intermediaries for medicines used to treat fever and cough and has solar lagoons for its effluents. The real culprit is the Straw Board factory, which releases 500 cubic metres of waste per day into its old ponds where the waste decays and generates stench. But we have initiated measures to stop it and things will improve soon."