Rain in a concrete jungle
Short of water, Singapore harvests the rain that falls on most of its land despite industrialisation. The city has found scientific solutions to an important problem in catching urban runoff -- pollution 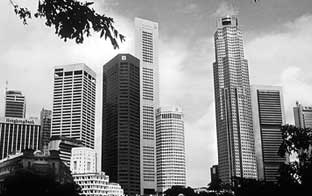 singapore is blessed with a good rainfall of 2,400 millimetres. But the land area is limited to 61,000 hectares -- less than half of Delhi. The city is sparing no means to harvest this gift. This capitalisation of rainfall has been possible only after considerable research and adoption of strict pollution and quality control. As most cities are polluted, there is constant danger of utilising water harvested in polluted environments, especially for drinking water needs.


In Singapore, the location of impounding reservoirs is usually far from highly inhabited areas. Catchment areas were once relatively clean, hence, the water captured was of good quality. Specific locations have now been notified as areas where pollution-contributing activities are prohibited. However, with the city growing at rapid rates and encroaching on the hinterland, pollution levels in runoffs are increasing. Suitable measures had to be taken to curb such pollution levels so as to minimise the impact on the quality of raw water -- urban runoff.

Water use in Singapore has been steadily increasing. Utilisation of the catchment in terms of total land area has increased from about three per cent before 1969 to about 44 per cent in 1986. Limited land and competing demands for its use from a growing industrial sector has led to the maximisation of land use in Singapore. This includes some urbanised areas with a high intensity of high-rise buildings, light industries and paved areas.

By 1986, the growing demand for water led to the establishment of the Lower Seletar-Bedok Water Scheme that used almost nine per cent of the total land area (see box: Singapore's rainwater reservoirs ). The most important feature of this scheme is that almost one-quarter of the catchment is in an urban area with high-rise buildings and industries. The surface runoff is subject to a wide variety of contaminants. Hence, control of water pollution and relevant technology are the main priorities in the scheme. This scheme is an example for Indian cities where water scarcity is compounded by water pollution.


A fair amount of research and development work has been done in Singapore to maximise abstraction of rainwater. Schemes have included the utilisation of the roofs of high-rise buildings, of runoff from airports for non-potable uses, and integrated systems using the runoff from industrial complexes, aquaculture farms and educational institutions. There are some notable examples.

SINGAPORE'S ROOFTOPS: High-rise buildings in cities house 86 per cent of Singapore's population. In all cases involving collection of water from rootops, a simple input/output model has been used to determine the available quantity of rainwater. In a system implemented in a 15-storey building, water collected on the roof was diverted to two rainwater tanks and the water was used for only toilet flushing. An important concern, particularly in the case of tanks at ground level, is the abundance of mosquitoes. A fine-mesh screen incorporated at the water inlet prevents mosquitoes from flying out of the tank rather than curbing the ingress of eggs through the input. Breeding of mosquitoes can be overcome by dousing the stored water with paraffin oil.

Another study involved high-rise buildings in an urban residential area of about 742 hectares with a total of 49,000 flats. Using a further modified programme, it was possible to compute the volume of potable water to be pumped, when there was no stored rainwater, and determine the frequency of such pumping. This dual-mode system showed how tanks placed on the roof resulted in lower water costs.

EDUCATIONAL INSTITUTIONS: Most polytechnics or universities have some land and rooftops. In one of the teaching institutions in Singapore with a total land area of 30 ha and the roofed area of 1.5 ha, a rainwater collection system has been successfully implemented. Runoff collected from the ground and rooftop waters are directed to a collection chamber where the water is subjected to some chemical treatment followed by sedimentation and chlorination. The treated water is then used for watering sports fields. Untreated water is used for irrigation. The annual saving in water at current costs amounts to S$74,000 ( us $46,250).

AQUACULTURE AND INDUSTRIAL LOTS: Aquaculture farms have large tracts of land and can utilise rainwater as the quality is acceptable. A case study was undertaken on an aquaculture farm, where ornamental and edible fish and aquatic plants are extensively cultivated. The rainwater collected helped reduce the contaminant level in waterbodies subjected to high nutrient loads.

AIRPORTS: Catchment areas in airports are much larger than roof areas and involve harnessing of both surface runoff and roof water. In the Singapore Changi Airport, built in 1986, the runoff is collected from runways, the associated turfed area, and roofs of buildings.


Pollution control has been central to Singapore's water harvesting effort. The first step to control water pollution was inter-departmental coordination. At least six government and quasi-government groups met frequently and chalked out programmes for strict pollution control. Activity in the catchment had to be regulated. Among the challenges of regulation was appropriate design of storm diversion and collection methods. In the case of the Lower Seletar-Bedok Water Scheme, various departments involved in planning, public housing, sewerage and drainage systems, pollution control, and other agencies got together to ensure that certain industries did not operate in the area. The drainage system was designed to channel water to suitable collection points.

An integrated approach to planning is essential in urban catchments. In areas where pollution is inevitable it has to be controlled and where there are chances to avoid it, necessary action has to be taken. The water authority of the region is best equipped to coordinate all such activity.


In order to deal with problems of chemical contamination in urban runoff, a highly scientific approach was adopted.

HYDROLOGICAL SIMULATION: Two specific computer models were used to determine appropriate designs of suitable storm diversions and collection methods. It was found that about 60 per cent of the rainfall ended as surface runoff. Relevant pumping schemes were designed from the collection ponds to the Bedok reservoir.

WATER QUALITY: Technical systems were designed to ensure that only acceptable quality water gets pumped to the water reservoir. This requires the designing of systems that can monitor water quality and trap water only if it is of the quality desired. The raw water in the Bedok reservoir is actually a mix of runoff from urban and semi-urban areas. It compares to water captured from a 'protected' catchment.

TRAPPING URBAN RUNOFF: Studies have shown that dry weather flows are of poor quality in urban areas. Such flows are not collected. These dry weather flows are usually made to go through rectangular channels. Storm flows often exceed the capacity of these channels. Hence, there is a need to remove the debris before diverting the stormwater to detention ponds where it is allowed to settle. These functions are carried out as follows:

l Removal of debris: During a downpour, storm runoff collected in the drain increases the normal water level and overflows into the gratings that serve as a debris filter. Stormwater is then collected in a pond and pumped or allowed to flow by gravity into the Bedok Reservoir.

l Diversion of stormwaters: Tropical storms tend to peak very early and first flushes tend to carry a lot of debris, particularly after a dry spell. But when storms follow one after another during the wet season, the debris levels fall. A system that relies on a chain of sensors prevents the reservoir water from flowing out into the monsoon drain when the reservoir water levels are high. When the levels in the monsoon drain and the diversion channel come to the same, the level differential computer causes the sluice gate to close.

l Sediment Removal: Despite all those precautions, wet weather flows can be full of sediments. These are trapped in detention ponds. Therefore, the first one metre of water that accumulates in ponds during small rainfall events is also pumped out. Detailed settling column analyses are carried out. A computerised system calculates the data and accordingly adjusts the rate of pumping. This improves the ability to remove suspended solids.


The most crucial aspects of urban water harvesting are the quantity and quality of the water diverted. Hence, water diverted to detention ponds should be of acceptable quality. The Singapore experience shows that urban catchments can be tapped with high rates of efficiency if the system is well planned, maintained and monitored. But it requires a strong scientific support system. Those interested in finding local answers to urban water shortage should note:

l The projects should to be workable and economically viable.

l The success of the scheme to harness runoff in Singapore Changi Airport in the past 10 years shows such projects should be adopted at all airports, even when the airport is close to the sea, as in Singapore.

l Coordination among different departments is essential. A programme's success depends on the ability of the water authority to regularly monitor the quantity and quality of the water.

l The correct calculation of the amount of water to be impounded and the amount that can be withdrawn is also of importance. If done well, this can increase the reliable yield. Analyses must become a regular feature for any water authority. Improving operational strategy and optimising output could be far less expensive than embarking on new schemes.

Adhityan Appan is a consultant and researcher with the Nanyang Technology University, Singapore. He specialises in rainwater collection in urban areas