Build it right to build it once

Dampness can debilitate a building and those living in it. Know how to get rid of it

Build it right to build it once

For 20 long years Kusum Singh of Agra struggled to fix the notorious flaking problem on one of the walls of her otherwise beautiful living room. “We spent thousands of rupees on that jinxed wall, redoing plumbing, masonry and plaster and applying waterproofing chemicals and damp-proof paints,” says Singh. “But damp patches would show up after every rain.” Almost every other house in the country, even new buildings, encounter this infuriating problem.

Dampness and water seepage are not just an aesthetic blotch. They are one of the most debilitating yet least understood threats to a building as well as those living in it. “Continual dampness can decay building materials like masonry, concrete and steel, compromising their strength,” says Sarita Rupan, a Delhi-based architect. According to a 2010 study by the Central Building Research Institute, Roorkee, prolonged dampness can lead to fungal or mould growth in the affected areas and cause respiratory problems.

Common practices to fix dampness are to replaster the affected area or apply wall putty and damp-proof paints. But these are only temporary fixes and can cost upwards of Rs 275 per sq m, adding to the financial woes of the owner. Moreover, says Delhi-based architect Prashant Kumar, wall putty and damp-proof paints do not work if they are applied after the dampness has appeared. It will simply come off the wall. So, it is important to understand the type of dampness or water seepage that has appeared, zero in on its source, and take the preventive measure (see ‘Doctor Fixer’ on facing page).

In Singh’s case, there was a gap at the top between the wall of her house and the adjoining wall of her neighbour. During the rains, water entered through the gap and ruined the wall finish. “An elderly mason from our village pointed it out. There is no sign of flaking since we sealed it,” she adds. But more often than not, fixing dampness can be a humongous task, requiring dismantling of the affected area, removal of moisture trapped in the structure and then re- constructing.

How to waterproof a house

“Traditional buildings last long because they are soundly built to minimise water penetration and are adequately ventilated to tackle the menace,” says Rupan. Today, houses are built at a frenetic pace with little regard to waterproofing.

Consider the case of Rohan Madnani, a lawyer who recently purchased a flat in a swanky new apartment complex in Gurgaon. “Dampness appeared everywhere in the flat after the first rains,” says Madnani. His problem has cropped up because the builder, in a haste to finish the project, did not allow the structure to dry sufficiently. The trapped moisture now emerges as dampness and flakes.

Waterproofing is an integral part of construction. Yet, it hardly finds a mention in the details advertised by real estate companies and receives scant attention during construction. Most houses develop dampness or water seepage because of improper drainage in bathrooms, on roofs or in surrounding areas. “This is because of lack of skilled workers who can make properly sloped floor or roof,” says Manu Gopalan, an architect from Auroville, Tamil Nadu. Non-availability of quality construction material is another hinderance. For instance, most bricks available in the market are made of poor material and are half-baked, for which they trap more moisture.

Worse, while there is no dearth of innovations in building designs and materials used in construction, waterproofing remains ignored.

In India, builders widely use the cheap and easily applicable bitumen or pitch to waterproof the roof. At a higher temperature, particularly in summers, bitumen undergoes photo-oxidation and releases carcinogenic polyaromatic compounds. This is the reason, several countries, including the EU, have banned the hydrocarbon product for household applications.

One of the few recent innovations that have revolutionised the waterproofing industry is liquid applied membranes. A 2013 report by TechSci Research, an international market research company, notes the market of waterproofing chemicals will grow by more than 20 per cent between 2014 and 2018, and the next generation coatings will drive this market. But most of these chemicals are hydrocarbon products, which are toxic during the manufacturing phase and may not be suitable for the tropical climatic conditions of India.

What seems best for the Indian condition are traditional techniques like applying brick-jelly concrete (concrete made with broken bricks and mortar), brick bat coba (lining the terrace with bricks) and mud fusca (mud tiles). These techniques are being forgotten with the wide use of concrete. Implementing the techniques in combination with reinforced concrete (RCC) slabs requires skilled labour as the floor or roof may develop cracks if not used properly.

“Even if one buys the best technology in the market, wrong execution will cause dampness and water seepage,” says Rupan. Architects say the cost of waterproofing does not even come to one per cent when compared to the entire cost of the project.

So, isn’t it better to construct the building right in the first place? 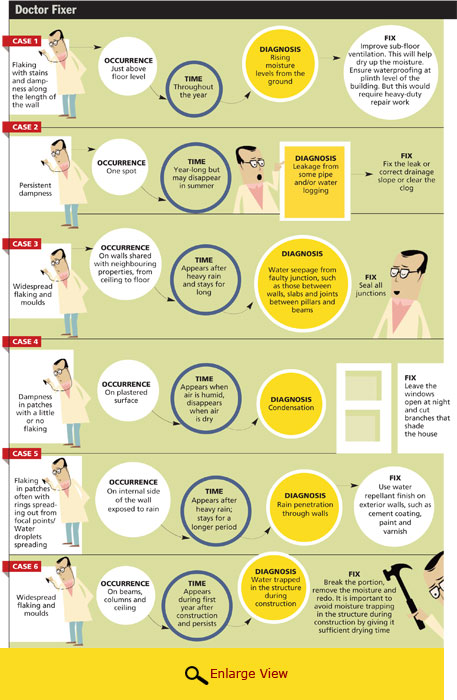