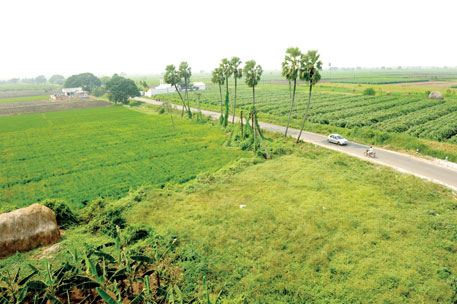 OVER A DECADE ago, during his two-term tenure as chief minister of undivided Andhra Pradesh, Nara Chandrababu Naidu had assiduously built up the image of Hyderabad as a globally known IT hub and one of the most sought after destinations for high-tech firms. Following bifurcation of the state in June 2014, the city has been serving as the joint capital of Telangana and Andhra Pradesh and will become Telangana’s in 10 years time. A bitter Naidu now wants his new capital to outsmart that of Telangana, or so it seems.

Ever since assuming office, Naidu has been pushing for laws, issuing notifications and holding meetings with international firms for establishing a glitzy world-class capital city from scratch, throwing all cautions and recommendations to the winds.

On December 22 last year, the state assembly passed the highly controversial Capital Region Development Authority (CRDA) Bill, which will allow the government to easily assemble land of its choice for setting up the capital city. The Bill gives CRDA absolute power to acquire, sell, transfer, grant license or alienate the land belonging to the authority for the purpose of development or redevelopment of the land.

Naidu’s Telugu Desam Party (TDP) government has already chosen the most fertile belt along the Krishna river between Guntur and Vijayawada cities. On December 30, the government issued a notification identifying areas in Guntur and Krishna districts that will be part of the new capital. This includes 25 villages and four hamlets in Tullur, Tadepalli and Mangalagiri blocks of Guntur district that are known for round-the-year bumper harvests. “The government will pool 12,000 hectares (ha) from these villages to establish the core area of the capital,” says A Giridhar, principal secretary, Municipal Administration and Urban Development department (see map).

Analysts say the project will affect at least 100,000 people who depend on agriculture; 85 per cent of them are small farmers and landless farm labourers. Besides, no government has attempted “land pooling” on prime agricultural land in such a massive scale (see ‘Pooling folly’). Such large-scale land use change for urbanisation will lead to economic and environmental catastrophe.

“The government is going ahead with the greenfield project without holding any public debate or consultation,” alleges Vadde Sobhanadreeswara Rao, former agriculture minister of the state. It has also ignored recommendations of the experts committee appointed by the Union Home Ministry to help the state select a site for its new capital. The committee, headed by former Union urban development secretary K Sivaramakrishnan, had cautioned against establishing a greenfield capital and diverting fertile farmland for the city. It had asked the state government to carry out a careful search for locations where government land is available.

Many farmers are up in arms against the project. In November 2014, a day before Naidu’s meeting with farmers of Nidamarru and Venkatapalem villages, women threatened to commit suicide if revenue officers do not go back. The women said they would not part with their land for Naidu’s dream capital.

Naidu has chosen Singapore as the model for his new capital. “Singapore has shown the optimal use of its limited land resource,” says Giridhar. “Since we do not have much land, we want to follow the island country’s land use model. We have signed MoU with the government for developing the master plan of our new capital,” he informs. Some Singapore and Japanese firms have agreed to partner in the construction.

At 12,000 ha, the capital will be much bigger than either of Guntur or Vijayawada cities. Some political leaders claim that the capital region could span about 20,000 ha.

The government says its plan is to convert an agrarian economy into a throbbing urban agglomeration “full of life and economic activity”. “Land pooling will not evict people as happens in land acquisition. Instead, they will get developed plots that have much higher land value,” says Giridhar. 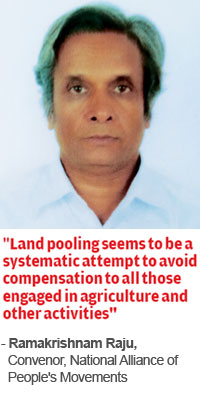 While many farmers are lured by the plan, those in 10 villages located within two kilometres of the Krishna are opposing the project tooth and nail. These farmers grow commercially important crops such as banana, sugarcane, cotton, corn, maize, turmeric, guava, lime, chilli, different vegetables and flowers round the year and claim that theirs is a farmer’s paradise.

“We lead prosperous lives. You will never see our fields lying fallow,” says Mallela Seshagiri Rao, farmer and lawyer from Rayalpudi village in Tullur. He owns about 8 ha of fruit orchards which earn him Rs 15 lakh a year. “We just have to dig 6 m to get water for irrigation,” says Sri Sambiah who owns two hectares in Mandada village. “We have seen bountiful harvests in times when other parts of the state reel under drought.”

“In fact, all the villages identified for the capital region have a vibrant agricultural economy of Rs 1,000 crore a year with established farm-to-market linkages,” says M G Devasahayam, a retired IAS officer who was the administrator-cum-estate officer of Chandigarh Capital Project. In December last year, he led a fact finding team of the National Alliance of People’s Movements (NAPM) to these villages. The region has a rich biodiversity with 120 crop species.

The government’s emphasis on land-pooling seems to be a systematic attempt to avoid compensation to the entire sections of people engaged in agricultural labour and related occupations, says B Ramakrishnam Raju, national convenor of NAPM. Under the Land Acquisition Act, 2013, every person whose livelihood is impacted by the project should be duly compensated before the government acquires land. Besides, the Land Acquisition Act prohibits acquisition of irrigated, multi-crop land even for public purpose. Under the Act, such land can be acquired only when there is absolutely no alternative, he points out.

Farmers say they are under tremendous pressure to part with their land. TDP leaders and ministers regularly visit their villages and ask them to agree for land pooling. The villagers allege that they are hooked under false police cases as a fear tactics. Realtors and investors are also coaxing farmers to sell land and are agreeing to pay over Rs 1 crore an acre (0.4 ha)—this is more than double the rate a few months ago. NAPM’s fact finding team observed that in November alone more than 1,400 ha have been sold in the region. “All this has created uncertainty, confusion and fear among the residents,” says P Chenniah, member of NAPM’s fact finding team.

The capital extravaganza is taking place when the state faces financial crisis. Private agencies have submitted proposals of more than Rs 1 lakh crore, which means the cost of developing the capital would be much more. “The state does not have enough funds. We have requested help from the Centre and will depend on developers,” says Giridhar. 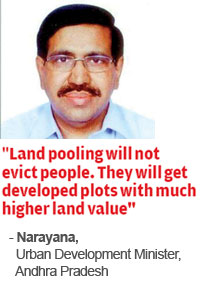 Such an enormous scale of land-use conversion for urbanisation will lead to increased emissions. A city on the upper reaches of the Krishna will destroy the river and make the Krishna-Godavari region prone to flooding, says K Babu Rao, a scientist and member of NAPM’s fact finding team.

P Narayana, urban development minister who is part of the Capital Region Development Authority, claims that the plan was prepared after cabinet members visited other capitals, Naya Raipur, Gandhinagar and Chandigarh, to study land pooling. But experts say none of the cities have pooled fertile land. Daivasahayam says Chandigarh, India’s only greenfield capital, was developed only on 6,000 ha, that too on barren land. The city has evolved over six decades. Despite being the capital of two states, with good infrastructure, thousands of buildings, wide roads, vistas, valleys, lakes and garden, Chandigarh is yet to become a “throbbing urban agglomeration”. Gandhinagar took 20 years to grow to its present stage.

“The farmers who are being enticed with 836 sq m of developed plot should realise that an urban area takes several decades to develop and farmers will never get the promised profit from the plots,” says Daivasahayam. According to K Babu Rao, Naidu’s Singapore dream is nothing but an “ecological catastrophe”.