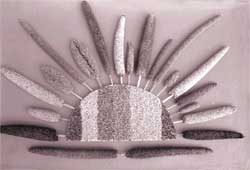 in june (17-23) this year, 150 representatives of various governments and ngo s met in Leipzig, Germany, to finalise negotiations on a global plan of action ( gpa ) for conservation and sustainable utilisation of plant genetic resources for food and agriculture. Topmost on the agenda was the reorientation of agriculture to make it biodiversity-friendly. The conference -- sponsored by the Food and Agriculture Organization ( fao ) -- witnessed considerable disagreements, with developed countries initially refusing to even discuss the issue of funding. According to Cary Fowler, former head of the secretariat of plant genetic resources in fao , specific funding commitments were not on the agenda of the conference anyway. He was, however, optimistic of some positive action at the World Food Summit in Rome in November, 1996.

Developed nations wanted a gpa that would guarantee them free access to agricultural biodiversity of developing countries without any financial committments towards assistance or benefit-sharing. In other words, developing countries were expected to take their own measures to conserve the biodiversity they possessed, and allow free access to the developed money-rich but biodiversity-poor West, so that multi-national corporations (mncs) could grab, package and sell back the same to the centres of origin.

On the occasion of the conference, fao prepared a Report on the State of the World's Plant Genetic Resources -- a comprehensive assessment covering 154 nations. Expressing concern at the dismal conditions, the report notes that the genetic base of the world's plant resources seems to be rapidly eroding, leaving crops exposed to pest attacks and disease. The main factor behind this massive erosion is commercialisation of agriculture. Present agricultural practices are destroying within a century what has taken thousands of years to build, and globalisation has hastened the process. In more than 80 countries, locally available genetic varieties are being replaced by high-yielding and pest-resistant ones. Instead of cultivating them on farms, farmers now buy seeds from mnc s. Fowler avers that "genetic strains are becoming extinct before our eyes".

The knee-jerk response of the international community to this crisis has been to set up an international network of gene banks. But according to fao , more than 50 per cent of such stores -- which number 1,300 in all -- are probably incapable of carrying out the basic task of conservation as they lack the requisite infrastructure, humanpower or funds. Seeds stored in the cold need to be rejuvenated every 10 years by germination. us has recorded a backlog of 20 per cent of its seeds for these reasons. India, Germany, South Korea, Brazil, Ethiopia, Romania, Egypt, Iraq, Vietnam and a number of African countries are faced with similar problems.

To counter this, the GPA proposes that us $1-3 billion be invested over the next decade for conservation. It also calls for a major international programme to "transform the current diverse, poorly coordinated, often inefficient efforts into a rational, effective and sustainable system".
Plant genetic resources for food and agriculture ( pgrfa ) consist of genetic material contained in traditional varieties and modern cultivars grown by farmers, as well as wild crop relatives and other wild plant species that can be used for food or feed. For hundreds of years, farmers have been initiators of and witness to evolution in crops, matching genes in different combinations to form landraces and varieties suitable to their needs. But although hybrids bring high profits and uniformity, the production is at the cost of quality. A narrow genetic base bodes ill for biodiversity. It leads to whittling down of genetic resources, spells danger for healthy crops and weakens their capacity for standing up to natural calamities.

Out of the 30,000 edible plants in the world, 7,000 have been domesticated (of these, 25, including plants like green gram, citrus, mango, betel nut, sugercane and cardamom have been domesticated in India). Over thousands of years, these have developed a huge genetic diversity. For instance, one species of rice -- Oryza sativa -- has 1,00,000 distinct varieties. The domesticated sunflower has narrow genetic variability, but the large variety within the wild species offers an opportunity to increase genetic variability in the domesticated sunflower through induced as well as natural selection procedures. Significant results have been achieved in improving resistance to disease and pests by these procedures.


India is witnessing a loss in genetic diversity of wheat, barley, grain legumes and oilseeds. T N Khushoo, former secretary, ministry of environment and forests, says, "The situation is indeed alarming. Biodiversity combats adversity, and hence a narrow genetic base spells doom. India urgently needs a biodiversity conservation board to preserve and broaden our plant genetic heritage as well as to protect our resources from external exploitation. Technically, both ex situ and in situ methods have their uses. By bottling genes in the form of seeds, mnc s are creating gene morgues, not gene banks."

K P G Chandel, director of the New Delhi-based National Bureau of Plant Genetic Resources ( nbpgr ) and India's representative in Leipzig, feels that the fao report is flawed in two aspects: "In the Indian context, we have not yet completed an inventory on all the plant genetic resources that we have. In fact, the number of varieties goes on increasing, so how can we comment on something we have lost if we don't know what we have? We have no parameter for estimating. This is the problem faced by most countries. The second issue pertains to the fao questionnaire not being appropriately articulated. How can countries who have imported the germplasm in the first place, maybe centuries back, claim an erosion in the loss of genetic resources?"

Chandel highlights the achievements of nbpgr in conserving plant genetic resources, claiming an accession of more than 1,50,000. Regretting the rapid erosion of genetic resources in the last five years -- another throwback from the green revolution -- he points out the case of loss in genetic diversity of barley in the Spiti valley in Himachal Pradesh due to the local people shifting to cultivation of peas. To encourage farmers to cultivate for conservation in their fields, incentives need to be provided.

However, Chandel is optimistic at the same time. "Our conservation and rejuvenation of seeds programme is right on schedule and not suffering from lack of infrastructure, funds or manpower. When the question of access comes in, yes, we are stressing that the country in question pay for our heritage and efforts," he claims. "We are inaugurating a new cryopreservation facility by the end of 1996 to preserve seeds indefinitely at -196 c in addition to more storage space at -20 c . This us $28 million project is funded partly by the us Agency for International Development ( usaid) unconditionally with no clauses for accession. We have also initiated dna fingerprinting for plant genetic resources for precise identification and to back India's claim on the source of origin for any plant."


In the given conditions, what needs to be accorded priority is ex situ (in controlled conditions like laboratories) conservation in gene banks, fields and herbariums. This kind of conservation gains significance in the event of a total wipe-out of crops owing to drought or war. In Bihar's Chota Nagpur region, resource- rich farmers are gradually switching over to improved varieties of crops, while the tribals are still growing the traditional varieties due to lack of resources. This is a case where the poor are conserving out of necessity even though yields are not high, but this may someday save the crop in the case of an unprecedented pest/disease attack.

It is people's participation which is essential for promoting agricultural development without causing serious damage to biodiversity. Farmers need to be encouraged to cultivate for conservation: this will ensure that they benefit economically and have enough for conservation as well. Currently, the world's food requirements depend on a small number of crops with rapidly eroding genetic varieties; 95 per cent of our proteins and calories comes from 30 crops. Moreover, agriculture in virtually every nation thrives on genetic resources from other parts of the world. Clearly, this is a matter of global concern, requiring internationally coordinated actions and efforts.