View from the top

Planners must stop looking down at hill-stations

View from the top 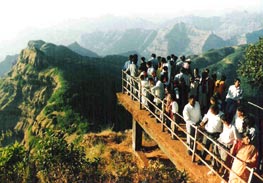 Planning is non-existent for India's hill-stations, admit hill municipalities. In the absence of a master plan, a free-for-all situation prevails where one constructs wherever one finds free space; if there is lack of space, one can simply add another storey to one's house. There is no tourist plan, which becomes amply clear when total chaos prevails during the peak season. Result: hill-stations are getting buried under waste, and are wallowing in their own sewage. A disaster is waiting to unfold. Literally.

Planning is the responsibility of the town and country planning department of the state governments. But why is this department not planning for hill-stations? "But there is no department of town planning for Darjeeling, or any other hill-station. So how can municipalities without the qualified town planners prepare master plans?" wonders Vimal Khawas, a New Delhi-based development consultant and researcher (eastern Indian Himalaya). So planners in the plains end up making all the plans for hill-stations, by default.


After a lengthy and energy-sapping battle, agitating local environmental groups were able to get a master plan for Ooty approved in 1997. But its implementation leaves much to be desired. "The master plan is drafted by the town and country planning regional office in Coimbatore, with absolutely no inputs from hill people," laments Geeta Srinivasan of the Nilgiri Wilderness and Environment Association, an Ooty-based NGO.

Three institutions oversee implementation: a local body, the Architecture and Aesthetics Aspects Committee (Triple A Committee), and the Hill Area Conservation Authority (HACA). The power for the approval of constructions on plots up to 250 square metres (sq m) is vested with the panchayat. The Triple A Committee is contacted for construction on plots up to 300 sq m. For bigger plots HACA, under the Chennai-based Housing and Urban Development Department, provides clearance.

Builders dupe the panchayat. The reason: they lack technical staff. Often, they submit several proposals for plots less than 250 sq m. After approval, the plots are 'joined' to make a huge structure. "The master plan is observed more in the breach than in compliance," says B J Krishnan of Save Nilgiris Campaign, an NGO based in Ooty.

The master plan lacks a monitoring scheme to ensure compliance. The only representation local people get is in form of two non-officials in the Triple A Committee. Although nominated by locals, these non-officials lack decision-making powers, and so cannot creatively contribute to planning. Officially people do participate, but in reality, their presence is only nominal and functional, not real.


Carrying capacity, a touchstone for hill planning, is a term foreign to Indian authorities. Simply put, it is an imaginary upper limit beyond which sustainable use of resources is not possible. It is calculated by accounting for variables such as the local population, quantity and variety of tourist resources; the fragility of local resources; the number and frequency of visitors; their activity types and intensity of resource use.

Carrying capacity is a relative concept. It factors in the native people and their tolerance to outsiders or tourists, and the latter's attitude or behaviour. That's why the calculation that works for Ooty will not work, for instance, for Mt Abu in Rajasthan. "At times just 10 per cent of tourists are enough to ecologically destroy the hill town. Hence it (carrying capacity) needs to be calculated sensitively," says Dong, executive director, Sikkim Tourism Development Corporation. None of the hill-stations that Down To Earth contacted had calculated their carrying capacities.

Rather than helping hill authorities calculate the carrying capacity of various hill-stations, the Indian government has spent crores of rupees under various schemes for 'hill development'. Positive results of these schemes are hard to find. In the mid 1970s, under the fifth five-year plan (1974-79), the Hill Area Development Programme and the Western Ghats Development Programme were launched. The aimwas to 'develop' the ecologically fragile hilly area. Fund allocation for the two programmes has also increased from Rs 170 crore in the fifth five-year plan to Rs 1,702 crore in the ninth five-year plan. But why aren't benefits visible?

Most of the schemes are sectoral in nature, writes D S Meshram in a 2003 paper, Development of hill areas: Planning issues and options. The Union ministry of environment and forests gives some hill-stations a special status by ; but even that is of little help (see box: Special status?).


Planning for hill towns cannot be similar to that for plains, says Singh of the SPA. Plains, for instance, have huge tracts of land, which can be used as parking space or landfills to dump garbage. But such 'luxury' is denied to hill towns. Planners need to understand the relationship between vegetation, precipitation, soil, topography, and hydrology to understand the limitations hill ecosystems pose to development activities.

Once these are calculated, they should be implemented with an iron hand. Eco-taxes should be introduced to limit tourist inflow and the money generated used for better resource planning. Hill municipalities should be strengthened in terms of skills and finances. Various taxes from tourism should feed into the local economy, rather than flowing downhill. Even the choice of technology will depend on the local terrain. For instance, large-scale composting plants and sewage treatment plants cannot be accommodated in land-scarce hill-stations.

Hill-stations require a fresh planning approach, which works from the top (read: hills) rather than the bottom (read: plains). Is the Indian government capable of doing this?