Villegers blueprint their own development

MYRADA moves a step forward in rural appraisal programmes, emphasising the necessity of involving villagers in their own development.

Villegers blueprint their own development 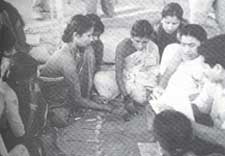 WHEN VISITING a village in Tamil Nadu's Dharmapuri or Karnataka's Mysore districts, you may come across a group of about 25 adults busily laying out an intricate design on the ground, using powdered rice, coloured chalk, twigs and pebbles. The designs are not mere patterns in colour; they are diagrams displaying primary information about the village, such as its layout, infrastructure, population, natural resources and trends in land use. The villagers and their diagrams are all a part of the participatory rural appraisal (PRA) programme organised by the Mysore Resettlement and Development Agency (MYRADA) of Bangalore, to assess characteristics and problems peculiar to specific villages.

In the course of implementing the rapid rural appraisal (RRA) programme, which uses standard observation techniques to assess rural situations, MYRADA realised in late 1989 that "rapid" would have to be replaced by "participatory", if villagers were to take part in determining their own development. Says James Mascarenhas, who has worked with MYRADA for almost 10 years, "We realised that a method that did not stop at appraisal but went beyond it into a shared analysis and understanding of rural situations, was required to evolve development strategies that are creative, productive and sustainable over a period of time."
This led to the formation of participatory learning methods (PALM), where villagers became participants in the development process instead of silent observers. Says Vidya Ramachandran, another 10-year MYRADA veteran, "The villagers obviously know much more about their situation than we outsiders can ever hope to learn. But that knowledge can be tapped only if we are humble enough to acknowledge the limits of our knowledge." And Mascarenhas adds, "There are many things we know nothing about. Similarly, villagers have no knowledge about many issues. But there are some areas about which all of us have some knowledge. The objective of PALM is to minimise areas of ignorance and maximise what we know."

MYRADA conducts more than 50 PALM exercises annually. These include participatory planning of natural resource development and management projects, integrated rural development programmes, identification of beneficiaries for projects such as health care, studying strategies such as credit management as well as other parts of rural life, such as customs, traditions and resolving class and caste conflicts.

A typical PALM exercise involves 25-30 outsiders, drawn from various NGOs, research and training institutes and the government, and an equal number of villagers. The village selected is usually one in which development programmes are being undertaken by an outside agency. Explains Mascarenhas, "The stipulation is made out of respect for the villagers whose curiosities and expectations are raised by such exercises. To leave the village without a concrete response to needs outlined would not be appropriate."

A PALM exercise normally covers five days during which all PRA participants stay in the village (See box). This gives the outsiders and the villagers the opportunity to interact, especially in the evenings, and a strong rapport is developed. After a preliminary study of the village history, layout and infrastructure, the participants carry out exploratory exercises to collect data on subjects such as village resources, means of livelihood and wealth ranking. Opportunities, roles and responsibilities are identified and an operational plan is drawn out.


Apart from the agenda for the exercise, review sessions are held in the morning and group presentations in the evening. The gatherings are lively, with animated debates to settle controversies. At the end of the day, there is a reasonable chance that something accurate and reliable would have been achieved, thereby meeting PALM's principle of triangulation of information, which essentially involves obtaining and verifying information in more than one way. Decisions regarding survey methods are usually taken on the basis of three factors: depth, or the number of aspects to be examined; breadth, or the number of units to be examined, and accuracy.

Constant use of PALM has led to a refined methodology. One new application has been the use of participatory village mapping to visualise patterns of caste, asset ownership and family size and to identify households containing handicapped persons and the chronically ill. Another development in methodology has been the evolution of participatory modelling on the ground from participatory mapping. This has been refined further by making models of what a particular watershed looked like 50 years ago and what it will look like in 20 years.

MYRADA has also been experimenting with different ways of conducting PALM exercises. For instance, in several areas, the villagers, without outside interference, drew the village and resource maps, indicating possible interventions. Encouraged by the results achieved, MYRADA now has villagers conducting their own exercises and interviewing one another.

PALM workers say of the many lessons they have learnt from their exercises, the most important is to listen instead of merely lecturing. "Each villager is a repository of so much knowledge," says Mascarenhas, "and villagers are capable of collecting far more accurate information than outsiders. They can correct it, analyse it and start a process of development if given the opportunity."

MYRADA realises that villagers, often forced to live in extreme conditions, are excellent resource managers. Their decision-making is precise and their perception about a particular situation is a critical input to any future planning. Marginal farmers, landless labourers, tribals, women and even children have proved to be good at resource management.

While mass participation through PRA reduces many biases, all other methods of information gathering cannot be replaced. Warns Mascarenhas, "Much of PRA's exercises depend on the astuteness of outsiders. The initial rapport often sets the tone of the effort. We have to guard that the attraction of PRA methods does not reduce them to gimmicks, but are a means to an end." This necessitates distinction between fact, hearsay and opinion and Mascarenhas says, "It's important to learn to be discerning because the data generated is live rather than cold and it is easy to get carried away by the method, without checking the veracity of the information."


Due to differing cultural idioms, outsiders and villagers often interpret the same issue in different ways, resulting in misunderstandings. A successful way to counter this, says Ramachandran, is to ensure there is "at least one villager for every outsider, if not two or three, because this gives the villagers the confidence of numbers, apart from encouraging them to participate actively, volunteer information, take pains to make us understand and cross-check information among themselves."

PALM workers realise that villages are often faction-ridden and there is every danger of a PRA exercise being monopolised by a dominant person or faction, representing vested interests. Other precautions include ensuring the participants do not get carried away by the artistry of their work at the expense of content. Explains Mascarenhas, "We often come across situations where a group toils hard producing a really attractive village map. When it is finished, someone points out that a whole street has been left out. Others in the group don't want the map to be tampered with, preferring to make up the shortcoming during the presentation."

Despite these flaws, MYRADA workers have no hesitation in lauding PRA as the best way to prevent development from degenerating into a bureaucratic, top-down and dependency-creating process. They stress development activities can be most successful when they are in the control of the rural poor.