10,000 families from Delhi's Yamuna Pushta slums were 'resettled' in Bawana this March. NIDHI JAMWAL went to meet them 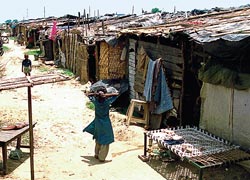 "Master Plan to make Delhi slum-free" reads a June 26, 2004 English daily headline. "The Union ministry of urban development plans to prepare a blueprint to make Delhi slum-free in five years. The plan will be ready within a fortnight," the daily continues. Another tall claim? Potents of another disaster? The government's track record on "slum relocation" immediately provokes such questions.

And one does not need to go too far into the past to check out where such grand schemes lead to. For some 10,000 families 'voluntarily evicted' from Yamuna Pushta and r k Puram in March this year as part of a beautification drive (see: 'Beautification drive', Down To Earth, May 15, 2004) they lead to the mat and grey/black landscape of Bawana Resettlement Colony, at the outskirts of India's capital city. The colony is a 'official' slum relocation and rehabilitation site. Clogged drains, putrefying waste, no sewe rage, children defecating in the open, unemployed residents -- Bawana, too, was once a blueprint. Were such appalling living conditions also factored in it?
Bawana Resettlement Colony is divided into five blocks, comprising 12 square metre plots that have been handed over to slum dwellers for ten years. Most slum dwellers shifted here in hope of a better life, which is what the authorities -- those blueprint people -- promised. But three months post rehabilitation, people here have no ration supply: they can't afford to buy rice at Rs 15 a kg, and if they want rations they have to travel to where they were earlier living. "The government thinks we are all kachra (garbage), which is why it has thrown us here at the outskirts of Delhi. We are living like animals amid waste and sewage. My children are daily falling ill. This is not what I understood by rehabilitation," shouts Khatija Khatoon, a mother of five, who was earlier living in Tejpal ki Bagichi in Yamuna Pushta.

As per the official timetable, drinking water is to be supplied thrice a day for two hours per shift. But water supply, chiefly groundwater, is extremely erratic and women have to queue up for hours to fill their buckets, pots and recycled pesticide canisters. People complain the water is muddy. And, complains Chaman bai, relocated from R K Puram, "For the last three months we are drinking this dirty water and almost everyday three new diarrhoea cases come up. Our children are dying. We cannot even cook rice in this water, as it leads to froth formation and the rice turns yellow."

The nearest hospital is 5 kilometres away and there is no transport facility.
The whole colony is strewn with waste; there is no waste collection system. The drains are clogged: does the Bawana blueprint mention creating mosquito-breeding sites? Residents complain that malaria is also widespread. "All the drains are higher than the ground level, which means all the waste and sewage flows into the colony. Which unintelligent government officials have planned this?" wonders Noor Anwar.

Public toilets have been constructed, but people complain of unhygienic conditions. "We have to pay Rs 2 to take a bath and Re 1 to use the toilet. Also it is cleaned only once a day. Since the drinking water supply is contaminated, our children suffer upset stomach daily and need to go to the toilet 5-6 times a day. Now who can daily spend Rs 10 to just use the toilet?" questions Khatija. She is also worried about her children's education. The primary school is under construction, a tin shed affair. High school will open shortly. In tents.


Most of these people were working in Yamuna Pushta. The men were either rickshaw pullers or daily wage labourers. Women used to work as house maids and earn up to Rs 50 daily. But after being 'rehabilitated' there is no source of income. "Going for work means travelling 6 hours a day and spending more than what we earn in a day. Government has betrayed us," complains Chaman bai. Shiela Dikshit, the chief minister of Delhi, visited Bawana about a month back with lots of promises. They are yet to be fulfilled.

As if this was not enough, people are being forced to live in kaccha jhuggis of mats and polythene sheets, as a government survey needs to be conducted. Explains Khatija, "Government thinks that we are chor (thieves) and will resell these plots, and squat somewhere else. That is why it has put a clause that we have to live in the plots allotted to us for at least three months, during which a survey will be carried out. In case some plots are found vacant, they will be cancelled and allotted to someone else. Only after the survey is complete can we construct pucca houses. Every day we wait for officials to come. We are not going out for work, fearing cancellation of our plots. The rains are approaching and our temporary jhuggis will go down the drain. Surely an epidemic will spread. Please do something, at least for our children."