Scientists and policymakers may choose to believe global warming is too remote to worry about, a mere projection by a computer that often can't get the next week's weather right. But, show studies, climate change has begun to tamper with ecosystems the world over. 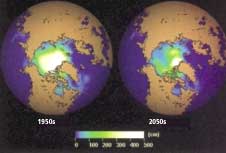 in january 2003, rainfall patterns of Lesotho -- a small region in Africa -- altered suddenly, ushering in untimely frost and severe storms that destroyed standing crops. "Frost in summertime! We never used to see weather like this," says Makhabasha Ntaote, a 71-year-old matriarch.

Indeed, showers have been defying weather forecasts worldwide. According to the World Meteorological Organisation (wmo), 2004 was the wettest year since 2000. The Intergovernmental Panel on Climate Change (ipcc) says precipitation in the 20th century has increased by 0.5-1 per cent per decade over most mid and high latitudes of the Northern Hemisphere continents. No systematic changes have been observed in latitudinal averages over the Southern Hemisphere.

A May 20, 2004 study led by Beate Liepert of the Lamont-Doherty Earth Observatory at Columbia University, USA, published in the journal Geophysical Research Letters , depicts a universal scenario. It's worrisome: incoming solar rays are getting trapped in a layer of clouds and aerosols, reducing the amount that ordinarily hits the Earth's surface. This imbalance is leading to weaker turbulent heat fluxes, and so reduced evaporation and precipitation. In short, a drier world.

Although rising temperatures should moisten the atmosphere, the research shows that human-made airborne aerosols are condensing the water to form smaller cloud droplets. This contributes to the observed thickening of Earth's cloud cover. The smaller droplets are not heavy enough to sink through the air as rain. As a result, the cloud cover lasts longer and there may be less rain worldwide.

But for some regions, global warming means more floods and other extreme weather events. According to WMO, an exceptional heat wave -- maximum temperatures soaring to 45c -- affected much of eastern Australia during February 2004, greater than any such heat wave here on record.

In 2003, instead of confining itself to issuing scientific reports and statistics at the end of each year, wmo was forced to report on extreme oddities of weather: a pre-monsoon heat wave in India had killed 1,400 people; at least 562 tornadoes had hit the US in May 2003, killing 40 people, much higher than the previous peak of 399 storms in 1992. In 1998, there were 63 weather-related disaster declarations, far more than the average 21.78 per year in the 1980s.

Unpredictable weather means: more human casualties and economic losses. In the 1980s, the world's property insurers lost an average of US $2 billion annually to extreme weather events. But in the 1990s, losses exceeded US $12 billion per year. For just the first 10 months of 1998, weather-related expenses -- US $89 billion -- far exceeded losses for the entire 1980s.

Poor nations tend to suffer more than wealthy ones: while flooding in Mozambique cut the country's gross domestic product (GDP) by 45 per cent in 2000, floods of the same scale in Germany in 2002 were blamed for just one per cent gdp decline.

In the wake of a uk study -- providing evidence that emissions of greenhouse gases (GHGs) has doubled the risk of extreme heat waves in Europe -- Peter Roderick, director of the Climate Justice Programme, asserted: "These kind of studies will help affected people seek compensation from big polluters. Claims linked to climate could far exceed the billion-dollar compensation given by tobacco companies."

from polar terrestrial to tropical marine environments, there is ample evidence of the impacts of climate change on flora and fauna spanning an array of ecosystems and organisational hierarchies (species to community levels).

Phenology -- the timing of seasonal activities of animals and plants -- is the simplest process to track changes in the ecology of species. Animals, plants and insects are already adapting by shifting their ranges, advancing migrating dates, and altering timings of mating and flowering. A study of 35 non-migratory butterfly species in Europe found that in recent decades about two-thirds have expanded their ranges northward by 32 to 241 kilometres. Many plants in Europe flower about a week earlier than they did 50 years ago and shed their leaves in the fall five days later. British birds breed on an average nine days earlier than in the 20th century, and frogs mate up to seven weeks sooner. Alpine plants are edging uphill and beginning to overrun rare species near mountain summits. A study published is the March 2004 issue of the journal Nature shows that Amazonian rainforests have experienced changes in dynamics and composition in the last two decades. Of the 115 relatively abundant tree genera studied, 27 changed significantly in population density -- a value nearly 14 times greater than that expected by chance. Genera of fast growing trees, including many canopy species, are increasing in dominance and density, whereas slow growing trees are declining.

Climate change impacts individual species as well as the entire food chain. Since different species react to climate change in different ways, the natural cycles of interdependent creatures -- such as birds and the insects they feed on -- may fall out of sync, causing population declines. Camille Parmesan, an ecologist at the University of Texas, USA, conducted a study highlighting the pressure species face when squeezed between a warming world and destroyed habitat. In a 482-kilometre swath of territory between northern Mexico and southern California, the Edith's checkerspot butterfly has become extinct in 80 per cent of its historical range. The major cause, Parmesan showed, has been rising temperature, which led to the early desiccation of snapdragon plants, so depriving the butterfly larvae of food. Changes in breeding patterns also affect the way species interact. For instance, winter warming has precipitated breeding season changes in some species of amphibians in Britain. This variability has immediate consequences: newts are entering ponds earlier than before, whereas frogs have not substantially altered their reproductive timings. Embryos and larvae of early-breeding frogs are, therefore, exposed to higher levels of newt predation.

Moreover, evolved communities are likely to be genetically less stronger than their contemporaries. In the September 2004 issue of Nature , researchers from McGill University of Canada reported a long-term selection experiment they conducted to investigate the phenotypic consequences of selection for growth at elevated carbon dioxide (CO2) concentrations. After about 1,000 generations, selection lines of the unicellular green alga Chlamydomonas failed to evolve specific adaptations to a CO2 concentration of 1,050 parts per million. Some lines, however, evolved a syndrome involving high rates of photosynthesis and respiration, combined with higher chlorophyll content and reduced cell size.

Another study by researchers from Carnegie Institution and Stanford University shows that though warming increased precipitation and nitrogen deposition have increased net primary production in the California grasslands, elevated CO2 levels are suppressing root formation, thereby decreasing the positive effects.

Climate change could drive more than a quarter of land animals and plants to extinction, states a research from the UK-based University of Leeds and Centre for Applied Biodiversity Science, published in the January 7, 2004 edition of Nature : As per the study, climate change projected to happen between now and 2050 will place 15 to 37 per cent of all species in several biodiversity-rich regions at risk of extinction. The researchers considered three different climate scenarios -- minimal, mid-range and maximum -- and species' ability to successfully disperse. The researchers found that minimum expected, or inevitable, climate change scenarios for 2050 produce fewer projected extinctions (18 per cent) than mid-range projections (24 per cent) and about half of those predicted under maximum expected climate change (35 per cent).

the World Health Organisation estimated in its ' World Health Report ' that climate change was responsible in 2000 for approximately 2.4 per cent of worldwide diarrhoea and six per cent malaria in some middle-income countries and seven per cent of dengue fever in some industrialised countries. In total, the attributable mortality was 154,000 deaths (0.3 per cent of the year's total) and the disease burden was 5.5 million disability adjusted life years -- life years lost due to premature mortality.

A study ' Potential effect of population and climate changes on global distribution of malaria fever: an empirical model ', published in the Lancet , shows small temperature increases can greatly affect malaria's transmission potential. Globally, temperature increases of 2-3c would increase the number of people who, in climatic terms, are at risk of malaria by around three to five per cent (that is, several hundred million). Further, the seasonal duration of malaria would increase in many currently endemic areas. Modelling studies also suggest that an additional temperature of 2 c by 2100 will result in a net rise in the potential latitudinal and altitudinal range of dengue and an increase in the transmission season in temperate locations. Changes in potential transmissions in areas currently endemic are projected to be limited.

According to a study by the us department of agriculture, global warming could also bring more hay fever -- allergic reactions to pollen, dust and other airborne particles. The ubiquitous ragweed produces nearly twice as much pollen now as it did 100 years ago and is likely to double its production over the next century century with CO2 levels increasing.

Yields of rice -- the staple food in many developing countries -- may already be crashing at twice the rate predicted by climate modellers, according to the first 'real world' experiment of the impacts of rising temperatures, conducted by researchers from the International Rice Research Institute (irri), the Philippines. The results suggest that global rice yields could potentially fall by a catastrophic 50 per cent during this century. It found that a 0.7c increase in the mean daily temperature led to a rice yield decrease of 10 per cent. Past predictions had forecast a decline of five per cent for an increase of 0.7c; according to the IRRI researchers, these predictions were low because they missed the fact that global warming is most intense at night, when tropical plants need to cool off and respire.

Like the developing nations, the industrialised world too would be affected. A team of scientists from the National Centre for Atmospheric Research, USA, and several universities compared present-day conditions in the US to scenarios for a doubled level of atmospheric CO2 , which will occur around 2060 if present trends continue. The results reveal that crop productivity across the Great Plains and Mississippi Delta increases, but lowers for many crops elsewhere. Previous work had found that corn harvests should decrease by 2060 in the Midwest's Corn Belt and Southeast but increase in the Northern Plains. The latest finer-scale study accentuates both these trends. In economic terms, the previous coarse-scale analysis had showed that climate change could benefit US agriculture in the year 2060 by roughly US $3 billion, even assuming that farmers did not adapt their planting to accommodate the climate shifts. The finer-scale analysis reduces the figure to around US $0.3 billion.
India Delhi Pollution Control Green Products News News News Climate Cover Story Cover Story
Donate Now