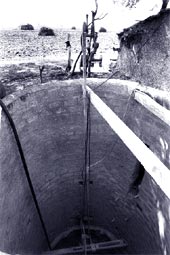 Here, everybody is affected by fluorosis (called wah in Gujarat, genu valgum in Madhya Pradesh, bankapatti in Rajasthan and lunj punj in Uttar Pradesh). Here, it is said, people after childhood jump straight into old age.

In Jharana Khurd village 20 km from the city of Jaipur in Rajasthan, there are no youth. All 1,200 people irrespective of age look old and have cracked teeth. "Our shoulders, hips and ankles are swollen and ache all the time. If we squat on the floor, it's painful to stand up," says Sayar Singh, a 30-year-old villager. "All 25 tubewells have dried up in the last three years of drought and now we only have one tubewell. The doctor has told us that its water is poison. But we have no choice," says Bhanwar Lal, a 40-year-old villager.

In Liliya block of Amreli district in Gujarat, people hang ropes from the ceiling of rooms and toilets. They have to clutch on to these in order to walk about. "Almost 70 per cent of the people in our village are suffering from wah. In the morning, our knees are swelled and we have to wait minimum for one hour before we can get up and move," says Deewani Pheekabhai, sarpanch, Haripur village in this block.

Such affliction brings all life to a standstill. Its everyday routines become bizarre experiences. Babalbhai Patel, of village Balisana in Gujarat's Patan district, put this question to the Down To Earth correspondent, "Can you provide me with a better toilet as I cannot sit and defecate?" A few years back, he said, he could walk 40 miles a day.

Such affliction sunders livelihoods. "In Bakhari village in Jharkhand's Daltonganj district, almost two-third population has developed physical deformities, as its water sources have high fluoride level (1.65 mg/l - 5 mg/l)" informs Ranchi-based geologist Nitish Priyadarshi. "This is affecting their main occupation, agriculture. There are fewer hands to till the soil." Says Kishore Parmar of Gondaran village in Amreli district of Gujarat: "Fluoride rich water is bad for land and crops." A decade ago, he says, one hectare (ha) of land would produce 100 kg of cotton. Today, it produces only 40 kg. Even the wheat grown with fluoride-laced water tastes bad, complains a fellow villager. "No one even buys cattle from such (fluoride-affected) villages," says Raman Patel of the Aga Khan Rural Support Programme, Ahmedabad.

Such affliction brings with it social stigma. Points out V K Joshi, former director, Geological Survey of India, "Siriha Khera village of Unnao district in Uttar Pradesh is facing a social boycott. No one marries a girl from that village."

Nanak Santdasani, assistant engineer with Gujarat Water Supply and Sewerage Board (gwssb) sums up the condition of Wah india's 65 million people: "Fluorosis is a disease that neither allows a person to live nor to die."


It is clear that fluorosis is not a localised problem. It is spread across states, and across a variety of ecological regions -- the Thar desert, the Gangetic plains, the Deccan plateau. Each of these regions are distinct in terms of rainfall, soil type, groundwater recharge regime, climatic conditions and hydro-geology. How, then, is such omnipresence to be accounted for?

High fluoride concentration in groundwater is a natural phenomenon in close to 23 countries such as China, Sri Lanka, West Indies, Spain, Holland, Italy and Mexico. Experts claim that a fluoride belt stretches across the north and east of Africa, passing through the Middle East across Pakistan and India, and thence into Southeast Asia and the south of China. According to a Rajiv Gandhi National Drinking Water Mission (rgndwm) report, the bedrock of the Indian peninsula consists of a number of fluoride-bearing minerals: fluorite, topaz, apatite; and rockphosphate, phosphatic nodules and phosphorite (all with high fluoride concentrations). When the bedrock weathers -- a natural chemical process in which the rock slowly crumbles to form soils -- the fluoride leaches into the water and the soil.

Leaching depends on various factors: the chemical composition of water; the presence and accessibility of fluoride minerals to water; and the time of contact between the source mineral and water. For instance, deep alluvial aquifers contain great quantities of water that accumulate over geological time, and so could contain water with high fluoride concentration at the very bottom. Hard rock aquifers contain water in cracks, but the very proximity to rock might make this water fluoride-rich, especially if it is extracted faster than recharged.

Climatic conditions also play a major role in deciding the extent of fluoride in groundwater. For instance a 2002 paper -- Fluoride in shallow aquifers in Rajgarh tehsil of Churu district, Rajathsan - an arid environment -- published in Current Science points out that "the arid climate with high evaporation and insignificant natural recharge might have accelerated the strengthening of fluoride concentration in the groundwater of this (Churu district) area".


The presence of high concentrations of fluoride in groundwater begs a further question: the Indian penisular bedrock has always been the same; then how is it that this problem has surfaced only in the last three decades or so?

"The presence of fluoride in groundwater and soil is also human-made. We have over-extracted groundwater and have tapped aquifers with high fluoride concentration," says S K Gupta, senior scientist with the Ahmedabad-based Physical Research Laboratory. Points out Kaushikbhai of Utthan, an Ahmedabad-based non-governmental organisation (ngo): "Over-exploitation of groundwater in the last 20 years is the chief reason for the spread of fluorosis in Gujarat. With the coming of diesel pumpsets, things have changed. Farmers have started to dig deeper into the earth's crust and are literally extracting poison."

"Thirty years back we used to drink water from open wells and talab, and there was no problem of fluoride. But in the last two decades, we have gone deeper and deeper into the ground and are extracting water with the help of pumpsets," says Devaji Thakur of Thakrasan village in Patan district of Gujarat. He says his state is a classic case of falling water tables and increasing incidence of fluoride in water. Pre-1935, the groundwater was available at the depth of 5-10 metre (m) and could be manually lifted. Post-1955, groundwater levels started to decline rapidly, between one and three metres per year. At present in some districts such as Mehsana, the water table is as low as 365 m below ground level. "Over-extraction of groundwater cannot lead to introduction of fluoride in groundwater, but leads to tapping of high fluoride aquifer," says Gupta.

Gupta's statement takes on a horrific hue once it is realised that 85 per cent of rural water supply in India comes from below the ground, and that cities, too, are digging deeper into the earth's crust to slake their thirst. What further complicates this picture is a peculiar interplay of official apathy and people's needs. As Rajeev Katpaliya, an Ahmedabad-based planner puts it, "It is a question of survival for people. They need water and if government does not supply it, they will go deeper." "People are extracting water from the depth of 300 m. What can the state do?" questions V C Trivedi, collector of Amreli district in Gujarat.