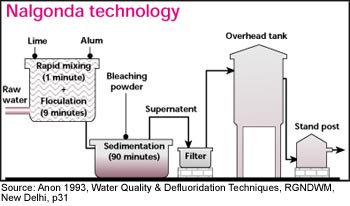 The official attitude towards fluoride-laced groundwater is best seen in the manner the state has gone about solutions.

In a 1999 nationwide study New Delhi-based Fluorosis Research and Rural Development Foundation (frrdf) found that "only a few laboratories in the country have specified the methodology for fluoride analysis." Experts claim the ion selective electrode method is the most sensitive. But all over India, only 117 laboratories possess this facility. "Water quality testing has not got much importance. Right now the thrust is on water supply coverage. Money has been provided to set up laboratories with the best testing facilities, but some states have not taken an action," says Alok.

frrdf's 1999 report also points out that most states follow different methods. There are no specified equipments which are to be used while testing fluoride. People do not mind such erratic supply. They are pleased to depend upon government.

State governments are mostly concentrating on providing piped water supply to the affected villages. But how far such schemes will continue to deliver remains to be seen.

Fluorosis can be detected in the neck, spine, knee, pelvis, shoulder and small joint of hands and feet. Gastro-intestinal symptoms include abdominal pain, diarrhoea, constipation, . Some neurological manifestations are nervousness, excessive thirst and tendency to urinate frequently.

In spite of all these symptoms, it is common for fluorosis to remain un-diagnosed for a long time. Also, patients often get misdiagnosed with arthritis, spondylitis, or non-specific backache. According to a 2001 study, "the occurrence of fluorosis can vary widely among different locations having almost the same fluoride concentrations in drinking water and can be affected by factors such as climate, individual susceptibility and biological response". The study also concluded that "poor nutrition also plays an important role in aggravating endemic fluorosis", thus explaining why poor people are often the worst affected.

Fluorosis is an irreversible disease and there is no cure.