Waking up to the horrors of child labour

Several groups are working among child workers in India, seeking to improve their working and living conditions

Waking up to the horrors of child labour 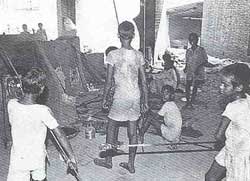 CHILDREN comprise six per cent of India's total organised work force; they also contribute an average 23 per cent of a household's domestic savings. Yet, exploitation of children as a social problem has only recently begun to agitate the international conscience. Germany and USA have now refused to import items, such as Indian carpets, which are made by a below-age work force.

In India, the children's cause has been taken up by, among others, the Delhi-based Centre of Concern For Child Labour (CCFCL), which also has field units in Bhopal, Aligarh and Sonabhadra. CCFCL provides relief and rehabilitation to child workers; networks with non-governmental organisations and the government to improve existing child welfare programmes, generates public awareness and holds education programmes for child workers.

CCFCL concerns itself with children who work as lock-makers in Aligarh, beedi-rollers in Bhopal, carpet-weavers in Sonabhadra and domestic labour in east Delhi. The children are taught practical skills, such as handling public systems like telephones and saving money, to help them function better in their working environment. CCFCL has also arranged for the children to receive regular medical check-ups from the local administration.

CCFCL's efforts has yielded some significant discoveries. For example, it was found that among carpet-weavers, apart from lung diseases, another occupational hazard was leg deformities that were the result of the children's constant sitting posture.

The organisation also provides legal aid, arranges to send children home, even to Nepal, when they want, and refers them to orphanages when required. The organisation's education programme in villages emphasises conservation practises because, as their spokesperson says, "CCFCL believes the problem of migrant child labour is linked to environmental degradation."

The Bandhua Mukti Morcha (BMM) has also conducted several major drives with the government's help to release bonded child labourers. To ensure proper rehabilitation, an income-generating asset worth about Rs 6,250 is given to the parents of each child. BMM works in collaboration with the South Asian Coalition on Child Servitude, whose area of operation includes India, Nepal, Pakistan and Bangladesh.

Nanban has set up a shelter for working children in Madurai. Nanban also provides vocational training to the children and takes them home to their villages if they want.

The Madras-based Institute for Social Education and Development (ISED), which works among landless labourers in seven districts of the state, has gradually incorporated child labour in its programmes. ISED provides legal aid and has introduced savings schemes for the children.

In Orissa, forest produce is collected largely by tribal girls. The Vikas Niketan, which works in tribal areas such as Sambalpur, has helped create women's groups to safeguard the girls' rights.

The Friends Rural Centre in Hoshangabad works for the uplift of agricultural child labour in Madhya Pradesh. In Bihar, the Chetna Vikas in Deoghar educates the children of the rat-catching tribals, the Mushars, and helps them take up alternative means of livelihood.

Snehasadan in Bombay runs a night shelter for working children, conducts training programmes and helps protect them from police harassment.