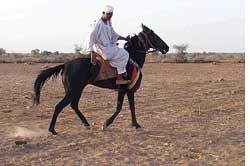 In 1983, Alex De Waal, a doctoral candidate at the Oxford University, was doing his fieldwork in Sudan when he met a bedridden and nearly blind pastoralist, Hilal Abdalla. He said 1983 was an unusual year. He was noticing things he had never seen before: sand blew into fertile land, and rain washed away alluvial soil. Farmers who had once hosted his tribe and his camels were now blocking their migration. The land could no longer support both herder and farmer. Several farmers had lost their stock and scratched at millet farming on marginal plots.

That year, fighters in military uniforms, mounted on camels and horses, laid the region to waste. Through whole swaths, they left only smoke curling into the sky. Abdalla said he feared for the future. The pastoralists scary premonition was to prove right. The 1983 aggression was the genesis of the armed conflict in Sudans Darfur region.

In 2003, the armed men returned, burning houses, raping women and torturing men of fighting age. At their head was a 6-feet tall Arab. In a conflict the US state department would later call genocide, he topped the list of suspected war criminals.

De Waal was there as well: by now a director at the New-York thinktank, Social Science Research Council. He recognized the commander: Musa Hilal, he was Abdallas son.

The fighting in Darfur is usually seen as a racial conflict, pitting mounted Arabs against African civilians. But the fault lines have their origins in another distinction, between settled farmers and nomadic herders fighting over failing lands. Musas aggression can be traced to the fears of his father; it can also be traced to how climate change shattered a way of life. In the early 1980s, environmental degradation in Darfur was blamed on the inhabitants. Dramatic declines in rainfall were attributed to imprudent land use by the areas pastoralists.

But by 2003, climate scientists fed historical sea-surface temperatures into computer models of atmospheric change. Given the particular pattern of ocean-temperature changes worldwide, the models predicted a disruption in African monsoons. This was not caused by people cutting trees or overgrazing, said Columbia Universitys Alessandra Giannini, who led one of the analyses. The roots of the drying of Darfur, she and her colleagues found, lay in changes to the global climate.

Climate change could increase the likelihood of civil war in sub-Saharan Africa by over 50 per cent within the next two decades, according to a new study at the University of California, Berkeley. The researchers first combined historical data on civil wars in sub-Saharan Africa with rainfall and temperature records across the continent. They found that between 1980 and 2003, wars were significantly more likely in warmer-than-average years, with a 1C increase in temperature in a given year. 1983 and 2003 were the warmer years. Despite recent high-level statements suggesting that climate change could worsen the risk of civil conflict, until now we had little quantitative evidence linking the two, said Marshall Burke, the studys lead author and a graduate student at UC Berkeleys Department of Agricultural and Resource Economics.

For De Waal, the results make sense. The large majority of the poor in most African countries depend on agriculture for their livelihoods, and their crops are quite sensitive to small changes in temperature. So when temperatures rise, their livelihoods suffer greatly, and the disadvantaged become more likely to take up arms, he said.