Frequent tremors in Khandwa, which lies on the Budwani-Sukta fault line, may be signs of a larger quake to come 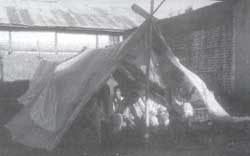 THE debate on whether earthquakes can be predicted has been revived once again with a series of tremors within a radius of 15 km around Pandhana. A small Madhya Pradesh town with a population of 12,000, Pandhana has been identified as the epicentre of the incessant tremors. From September 11 to November 27, this town, 20 km from the district headquarters of Khandwa, experienced 1,153 tremors, the strongest measuring 3.2 on the Richter scale. "There was a large 'boom' and for a moment it looked like everything is going to end," says Amruti Bai, 65.

Also known as dhamaka among the locals due to audible explosions underground, these tremors generally occur early in the morning between 4 am and 7.30 am. "The frequency of the tremors were very unpredictable," said T R Gole, Pandhana block medical officer. With numerous tremors everyday, the highest recorded frequency was 88 tremors on October 23. Janardhan Ganpathrao Negi, emeritus scientist of National Geophysical Research Institute, Hyderabad, believes that the tremors are a foreboding of a much bigger earthquake. "Based on past experiences, we can estimate an earthquake though we cannot exactly predict it," he says. The affected region lies on the sensitive Burhanpur and Budwani-Sukta fault lines. This region experienced major earthquakes on November 8, 1868, (5.7 on the Richter scale) and March 14, 1938. Negi argues that there is a particular "seismic cycle" for this fault line which means seismic activity might occur every 65 years or so. The 65-year cycle would come to an end in 2003. If this theory is applied, a major earthquake is "inevitable" in the region, Negi asserts.

Negi had warned of a major earthquake in the Deccan just before the devastating Latur earthquake (September30, 1993). On the basis of the theory of cyclical earthquakes, Negi has predicted a "mega earthquake" in the Northeast by 2010. For predicting an earthquake on this fault line, he put the cyclic period at 100 years with 10 year's margin.

Other experts, however, refute Negi's theory. Says Prem Saklani, a reputed seismologist and former professor of Delhi University: "Earthquakes cannot be predicted. Not even in Japan and China." Negi, on his part, argues that he is a theoretical scientist and the infrastructure to test out his theories does not exist in India.

Meanwhile, the Indian Meteorological Department (IMD) and Geological Survey of India (GSI) offices in Delhi have brushed aside the panic, calling Negi's predictions "scaremongering". The IMD and GSI experts, who were monitoring the seismic activities in that area, negated any possibility of a major earthquake. On November 19, at a discussion in Khandwa, R N Mishra of GSI said the tremors have nothing to do with earthquakes. According to Mishra, 99 per cent of these seismic activities have a focal depth of less than a kilometre and is a common geological occurrence after the rains. These tremors are not related to the Budwani Sukta fault line, he says. However, the tremors are yet to be analysed by IMD scientists based in the area.
The local people have already started sleeping outdoors, inside tents instead of their homes. Every house has been cleared of the belongings. People have left their places to reside with relatives living elsewhere. "They have even talked of selling their property and moving into some other town," said Harish, a local resident. "There was unnecessary panic that was created because Negi made his beliefs public without consulting the scientific community because they could not assure the people of that there would be no major quake," said Jai Nagda, a journalist based in Khandwa.

According to him, this panic can lead to a major downfall in the economy of the region. "Shopkeepers are already refusing to give credit to people. The whole economic cycle will collapse with the earthquake scare," he said."Industries will think twice before setting up any kind of plant here," says R P Mandal, the district collector. But Mandal is taking no chances. All the 36,100 people of Pandhana and the 23 surrounding villages have been insured apart from property worth Rs 510 million. Medical facilities have also been kept ready. Compensations have been fixed at Rs 50,000 for loss of life and Rs 25,000 for major injuries.


Though experts are divided on the possibility of the earthquake, what is of concern is that the region has a history of seismic activity. The Nimad area covering Khandwa, falls in Zone in of India's seismic map. Khandwa, falls on the weak Son -Narmada -Tapti lineament zone, which is again divided into four zones - Malwa area of the Saupani fault which is to the north of Balwada fault (north Narmada fault line); Narmada area between the north and south Narmada faults; Satpura range between south Narmada and south Satpura (Burhanpur fault) faults; and Tapti valley which is to the south of the southern part of Satpura. Apart from these faults, the Budwani-Sukta fault is known as a weak stretch. As far as seismic activities in Khandwa are concerned, the Budwani-Sukta and the Burhanpur faults are quite significant.

The tremors in Khandwa can be called earthquake swarms (a series of tremors). They are concentrated in a small area and after reaching an intensity of around 3 on the Richter, the seismic activity dies down. Nimad and the adjoining areas have experienced about 30 earthquakes in the last two centuries, ranging from intensities of 4 to 6.5 on the Richter. There were seven earthquakes from 1847 to 1992, two crossing a magnitude of 6. In 1993-94 alone, the region witnessed around 700 tremors.

Scientists have so far been unable to to evolve a dependable way of predicting earthquakes. The only predictions that proved correct were the earthquakes of Haicheng (February 1975) and Songpan (August 1976) in China. "For prediction you need the right infrastructure that we don't have. I base my prediction on the trend of past earthquakes," Negi says. "It's true that tremors are an indication of an impending earthquake. But it is not always true.Often there'are shallow tremors which don't indicate any thing," says Saklani. For the moment, the only way to warn about impending quakes could be to go back to the ancient methods which the Chinese still use like observing changes in the behaviour of rats and catfish, or fluctuation in the groundwater level.