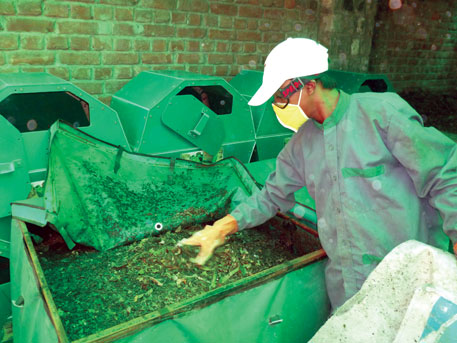 DELHI IS notorious for its stinking heaps of garbage, choked drains and an army of ragpickers who make a living out of this waste. With a population of over 17.4 million, the capital churns out 8,000 tonnes per day (TPD) of garbage every day. So after the recent announcement of “Swachh Bharat Abhiyaan” by Prime Minister Narendra Modi, the real question is: will citizens do their bit to keep their city clean?

According to Mani, at least 40 per cent of the waste going to landfills is easily compostable. “This will include the huge amount of kitchen waste discarded from hotels in addition to regular household and horticultural waste,” she adds.

Delhi has three centralised composting plants at Narela, Okhla and Bhalswa which collectively process about 500 TPD of compostable waste. “It is quite a challenge to sell the compost that is produced because the waste we get from the Municipal Corporation of Delhi is mixed with debris,” says Subash, manager of Nature and Waste Management Pvt Ltd, the composting plant at Bhalswa.

Money down the drain

Let alone make profit, Delhi is spending a fortune to dispose of its waste. As per the latest draft manual on municipal solid waste management prepared by the ministry of urban development, three million tonnes of waste can be accommodated on 40 hectares of land, considering the life of the landfill to be 20 years. But for Delhi that generates 8,000 TPD of garbage, some 800 hectares of land is needed and that would cost Rs 800 billion at the present circle rate. But Delhi does not have the land. In addition, municipalities are required to incur recurrent operating expenses on labour and machinery at the landfill and on transportation of waste which is nearly Rs 1200 per tonne, says Tufail Ahmed, who has been managing landfills in Delhi for almost three decades now. Thus, every tonne of waste disposed of at a landfill costs the Municipal Corporation of Delhi about Rs 14,500. Bardhan says a smart solution to the problem is decentralised plants.

He, however, warns the plants will only be successful if the right technology is used that is cheap and easy to operate. In fact, some communities are already benefiting through local waste management plants in Delhi (see “ Small steps towards a cleaner locality”). And to popularise it further, experts say, the municipality should provide incentives to communities for waste management. “It can fund these plants out of a cess on total municipal expenditure on waste management,” suggests Subir Paul, a visiting professor at the School of Planning and Architecture, Delhi.

Sunil Mehra, chief town planner, East Delhi Municipal Corporation, says, “The municipality is willing to provide rebate on property tax to the owners who manage solid waste locally, but a policy needs to be worked out.”