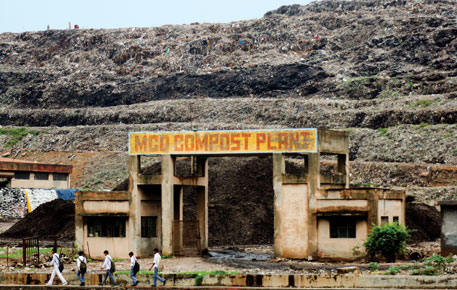 The sacks of compost stacked neatly at the entrance of the municipal compost plant in Bhalswa, on the outskirts of north Delhi, give the picture of a flourishing compost plant. Senior officials at the facility, run by Excel Industries Private Limited, say it turns a huge amount of municipal solid waste (MSW) to wealth every day.

But the picture contrasts reality. The sacks are accumulated not because they are ready to be transported to farms and gardens, but because they have no takers. “It is of very poor quality,” says Govind Singh, who used to work as a gardener in the Municipal Corporation of Delhi (MCD). “I was given the compost for the MCD parks, but it was no good,” he says.

It is laden with heavy metals, toxins and glass because MSW is not segregated, says Asit Nema of Delhi-based non-profit Foundation for Greentech Environmental Systems. MCD transports all waste to compost plants in the same truck. “So, even if waste is segregated at source, it gets mixed in trucks,” he says.

What’s more, the sacks are left in the open. The weather-beaten sacks get torn over a period of time and rains wash away nutrients present in the compost.

The most common method of composting in the country is windrow—decomposing biodegradable waste in long rows. “We have a huge machine which has five metallic rows in concentric circles,” says Subhash Kumar, in-charge of the plant. MSW is placed on the farthest row, sprayed with microbial liquid and left in 70°-80° C temperature for a week. The waste is then turned by heavy machines and shifted to the inner circle. The procedure is repeated five times, and each time the waste is turned, he says.

After five weeks of anaerobic decomposition, the waste is sifted through a filter. A 40 mm screen removes plastic, iron and glass, which is sent to the landfill. The refined waste is then passed through a 20 mm screen at 40°-45° C and then through a 4 mm screen to get the final compost. This is packed in sacks and kept in temperature between 15° C and 20° C before being handed over to the distributor, he says.

Windrows composting works well when large quantities of waste have to be handled. The Supreme Court’s committee for solid waste management in the country endorses windrows as the method for composting in the country.

So why does the compost have few takers? The problems lie in the temperature in which compost is prepared and its turning process. Turning improves its porosity and oxygen content, removes moisture and evenly distributes its cooler and hotter portions. “Most plants have a fleet of turners but there is no guarantee that waste will be turned five times at regular intervals. All parts of the waste may not be subjected to the right temperature. Thus, the desirable level of pathogen and weed seed destruction may not be achieved,” says Nema.

Machines require considerable amount of fuel. This apart, when the machines operate, the level of wear and tear is high. Consequently, they need repair work, which translates to high operating cost. Companies cut cost by subtracting essential processes. Good quality compost should be prepared only in 60°C-70°C, states the Supreme Court’s inter-ministerial task force on nutrient management using city compost. The moisture content should be maintained between 40 and 60 per cent. A minimum of 20 per cent moisture content is essential to keep the beneficial microbes alive, it states.

“If these factors are changed, like at the Bhalswa plant, the quality of compost gets affected,” says Om Rupela, former principal scientist at the International Crop Research Institute of Semi-Arid Tropics in Patancheru, Andhra Pradesh. “An organic farmer should never use city compost because it is laden with heavy metals,” he says.

The plant at Bhalswa was set up in 1989. It started functioning in 1993 at one of Delhi’s oldest landfills, spread across 21.06 hectares. About 2,200 tonnes of MSW from Civil Lines, Karol Bagh, Rohini and Najafgarh is dumped here every day. The plant has the capacity to produce 500 tonnes of compost per day. But it does not produce more than 350 tonnes, says Sanjeev Agrawal, scientist at CPCB. The final production is only about 24 per cent of the total waste received.

“The output is low in almost all the facilities because firms do not segregate MSW. Mixed waste is allowed to decompose in unregulated or uncontrolled way. Sorting is done only in the second phase,” says Agrawal.

ILFS Eco Smart has been operating a municipal compost plant in Okhla since 2008. Against its installed capacity of 200 tonnes per day, it produces 150 tonnes compost per day.

The facility at Narela-Bawana, operated by Integrated MSW Management-Compost plant and Sanitary Land Fill Site, is also reported to be operating at 1,276 tonnes per day against its installed capacity of 1,500 tonnes per day. Between September and December, 2012, the company received 1,55,712 tonnes of waste.

Most plants do not adhere to the Fertiliser (Control) Order, 1985 (FCO). A study was conducted in 2011 by the Indian Institute of Soil Science, Bhopal, to investigate physico-chemical properties, fertilising potential and heavy metal polluting potential of MSW compost in 29 cities. It found organic matter,nitrogen and phosphorus contents in the compost low and heavy metal content high. None of the samples were within the FCO limits (see ‘The rules say’). Compost of only two cities—Suryapet and Vijayawada—passed the statutory guidelines of European countries. In these two Andhra Pradesh cities MSW is segregated at source. According to a task force report in 2009, Kanpur’s compost quality was found to be of highly superior quality because of segregated waste.

But the defaulting plants receive pats on the back for churning out compost. The Okhla composting plant received Rs 25 lakh as carbon credits from the United Nations Framework Convention on Climate Change for processing 2 lakh tonnes of MSW into compost through aerobic composting technology.

The companies take money from the municipality to run the compost plants and get incentives from the government, apart from enviroment agencies for converting MSW to zero waste. “Where’s the need for quality control and sell compost?” asks a junior employee at the Bhalswa plant. 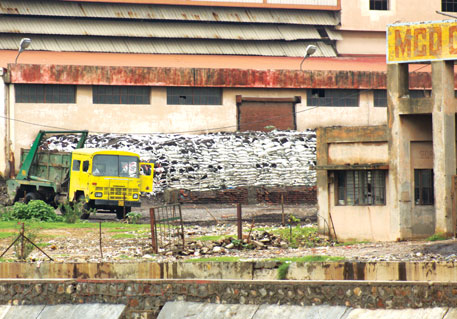 Sandeep Mishra, member secretary of Dehi Pollution Control Committee (DPCC), which encourages composting in hotels, says quality of compost is not DPCC’s concern. It is only concerned with the management of waste.

As per FCO, a government-appointed inspector takes a compost sample from the market and gets it analysed at the Central Fertiliser Quality Control and Training Institute at Faridabad, or regional fertiliser control labs in Mumbai, Chennai or Kolkata, or in any laboratory notified by the government. But firms usually get their product tested at private labs.

Taufik Ahmad, an MCD official, says the company at Bhalswa sends compost samples to Shriram Institute for Industrial Research every six months. However, the company officials are not ready to divulge the results. L Krishnan, CEO of ILFS Eco Smart, says the company tests its samples at its own laboratory.

“There is heavy subsidy on chemical fertilisers. Incentives should also be offered on purchase of MSW compost to farmers,” says Rupela.

“There is a rule to sell a bag of MSW compost with two-three bags of urea. But what can we do if farmers do not want it?” says Mohan Singh of a fertiliser distributing company at north Delhi. A farmer would spend Rs 2 to buy another bag of fertiliser rather than spend Rs 3 on a bag of compost, he says.

When the government does not promote use of compost, how can one expect farmers to develop faith in it? asks Krishnan. “Compost has fewer buyers not because of the poor quality but because of the absence of subsidy,” says Krishnan.

“Steps have been initiated to give incentives or subsidies on MSW compost,” says Krishna Chandra, additional commissioner, department of agriculture. But these are still at the planning stage, he says. The cost of composting can come down if waste is segregated at source, says Almitra H Patel, member of Supreme Court Committee for Solid Waste Management.

“If it can be brought down from Rs 2,500 per tonne to even Rs 1,500 per tonne, it would become affordable for the farmers and the facilities could run in no loss and marginal profit,” she says.