Water is not for all

Water is not for all 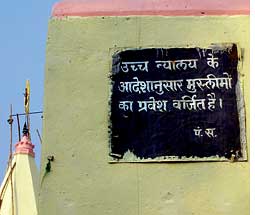 Mulk Raj Ahmed runs a tea-stall near Rajgir's famous Brahma Kund. But he cannot use this hot water spring. Eleven of the 12 hot water springs in Rajgir in Bihar are out of bounds for Muslims.

Last year, the panda (priest) committee, a body of Hindu priests of Rajgir, put a notice at the entrance of the kunds declaring Muslims are not allowed. The priests draw sanction from a judgement passed during colonial times. In 1937, the chief justice of the Patna High Court, Counrtrey Trell, had ruled that all kunds except one are the preserve of Hindus. The divisive judgement came in response to a plea by Muhammad Walilul Haq. A small-time politician from Rajgir, Haq had first tried to rally opinion against the bar on Muslims entering the kunds.

There is no precise date to the origins of this restriction.But according to Haq's petition, Hindus started stopping Muslims from entering the kunds only around the late 1920s. This was also a time when many Hindu zamindars in Rajgir had been economically upstaged by Muslim zamindars. Haq pleaded, "the hot water springs are a natural source. And the area has been under both Hindu and Muslim zamindars. So the springs should be open to all."

The court ruled that since there were temples around the kunds, these waterbodies should only be open to Hindus. It made an exception for the Makhdoom kund, a Muslim shrine (see box Makhdoom Saheb).

"This judgement of the High Court should be respected," said Brajnandan Upadhyay who heads Rajgir's priest committee. But Mohammad Akil Akhtar, secretary of the Makhdoom kund, disagreed. "It is surprising colonial diktats are being followed, six decades after independence," he said. The Makhdoom kund does not bar entry on religious grounds. "It's nature's gift," Akhtar said.

Kishore Kunal, the administrator of the Bihar Rajya Dharmik Nyas Board, which tries to solve disputes among religious societies, also believes the judgement is unfair. However, he also held that overturning the 1937 ruling will not be easy. "Previous judgements carry a lot of weight in jurisprudence. Least we can do is word the notice differently. We can write non-Hindus not allowed," he said.

But the priest committee rejects even such cosmetic changes. "Kunal is unnecessarily fanning communal sentiments. Where is the need to change the 1937 judgement?" Upadhyay asked. It is not just the committee. Surendra Prasad Tarun, two time mla from Rajgir, said "Even the then Bihar governor Zakir Hussain did not enter the spring fearing infringement of the court order." The 85-year-old Congress leader cited another incident. "In 1948 K Abraham had to enter the spring for administrative purposes. Abraham, who was Christian, had to convert to Hinduism for a day to enter the kund," he said.

But Mulk Raj Ahmed, whose tea stall draws a steady stream of visitors to the Brahma kund, chafes at such arrangements. "This is just like colonial rules barring Indians from certain places. Has anyone been prevented from visiting hill stations on religious grounds," he asked.