Panchayat fights to retain what is left of Saligao's groundwater 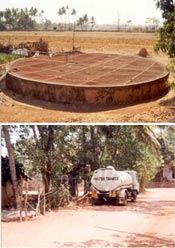 The heavy influx of tourists into sleepy, coconut tree-fringed Saligao is no longer welcome. This Goan village has not been able to live down the reputation it acquired in the late 1960s as a popular hippy haunt. To this day, it is a riotous and overgrown tourism centre. It is perhaps this pressure on resources that saw the Saligao gram sabha exploding over the issue of large-scale illegal sale of groundwater.

Saligao is, in fact, just one of the many villages hit by the state government's inability to put in place an effective centralised water supply scheme. They are hit by a double-whammy: poor water supply from government schemes and depletion of groundwater in their area due to commercial sales. Water, sold by the tankerful for a few paise per litre, is sucked up by a resource-hungry tourism sector, as also the real estate and industrial sectors.

The villagers are, however, not willing to give up without a fight. The village panchayat set up a five-member Well Water Inquiry Committee to study illegal extraction and sale of groundwater. The gram sabha has agreed on the inquiry report of the committee. Its minutes read, "It is unanimously decided...that extraction of water by a large number of water tankers from the wells of the village panchayat jurisdiction of Saligao should be stopped."

In June 2002, A G Chachadi, who teaches geology in Goa University, wrote to S D Sayanak, chief engineer, department of water resources, Goa, saying the matter "is assessed to be serious", and requesting 'necessary action' under the recently passed Goa Groundwater Regulation Bill 2002. Chachadi is engaged in a European Union-funded research project to study Goa's aquifers. "I enclose a map of (the) groundwater flow, wherein the flow lines of groundwater around Saligao area confirm that groundwater is being excessively pumped out of the shallow aquifers," he wrote.

Villagers made a record of the number of trips that tankers made to local wells. Based on this data, Chachadi arrived at an estimate that tankers take away about 435 cubic metres of water per day. "This is a very large quantity if one considers the retaining and yielding capacity of this shallow sandy aquifer. This is the main reason why shallow wells around Saligao are dry even under normal monsoon conditions," he warned.

The inquiry committee also took up the issue with higher authorities at the state-capital level in Panaji. However, responding to a question in the Assembly, the state government pleaded ignorance.

There are also increased incidents of individuals protesting against the existing situation. But those privatising and selling groundwater resources -- at below 10 paise a litre -- evidently have a big stake. In May 2002, Shivram Salgaokar of Mollem Bhat complained in writing to the Saligao sarpanch that two years after a huge well was dug next to his field, and large-scale extraction started, farmers began to face acute water shortage. Initially, water sellers supplied water free-of-charge to farmers. "This year they stopped us from digging wells in the fields with the promise that they would provide free water for our winter crops. They did not keep this promise. As a result, the entire crop planted in this area was lost," the small farmers of the area complained.

The villagers of Don Vaddo and Sonarbhat localities in Saligao conducted a study of 25 drinking water wells in the area. They record that a family (the Kudnekar brothers), which got permission to dig a well for agricultural purposes, started commercial extraction of water. They started with one tanker, and have four today. The study points out that during summer, these tankers ply from 4.30 am to just before midnight. It also found that groundwater levels 'fell sharply' between 1995 and 2001. Nine out of 27 wells had half-metre or less water in May 1995. By May 2001, as many has 21 wells had half metre or less. This was the period when the Kudnekar brothers sharply increased their commercial water extraction.

Residents of Saligao now realise that defending local water resources is not enough. There should be a parallel effort to generate more groundwater through rainwater harvesting, especially in view of the fact that the area receives much rainfall.

On October 12, 2002, politicians announced plans to re-examine the Goa Ground Water Regulation Act, 2002. At the end of the day, though, it is political will and administrative action -- not laws -- that hold the solution to Goa's water woes.