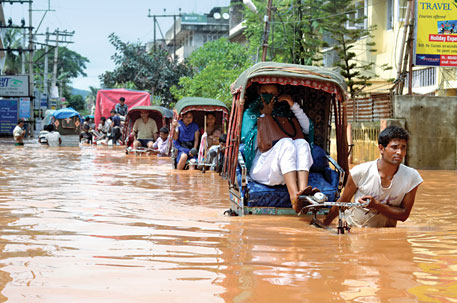 EVERY YEAR during the monsoon, Guwahati in Assam witnesses devastating floods. After years of inaction, Chief Minister Tarun Gogoi set up a committee on July 17 this year to study the problem and suggest remedial measures.

The state administration has realised that floods are caused by a poor drainage system. Natural and artificial drains in the city get clogged during heavy rains and spill on to the roads. The Bharalu, the only river which flows through Guwahati and carries excess rainwater to the Brahmaputra, has been reduced to a dumping ground for garbage by the residents.

Illegal constructions along the Bharalu make matters worse. “The natural drainage has been blocked in many areas as a result of encroachment,” the chief minister told mediapersons. It is not just the river. The encroachment of the city’s protected wetlands, which took care of the water during floods, is double whammy. Gogoi has promised measures to avert such disasters.

Since the past many years, floods have been throwing life out of gear in the largest city of the state. Houses have been damaged, property has been lost, agriculture and education have suffered. But the consequences this year were unprecedented.

On June 27, the India Meteorological Department recorded 57 mm rainfall in Guwahati. This was the fifth highest in a decade. Vast areas of the city were inundated. The National Disaster Response Force had to be called in to rescue marooned families in the flood-affected areas. Nine persons lost their lives.

Apart from the Bharaluriver, there are three rivulets within the city— Mahabharalu, Bahini and Basista. Throughout the Bharalu’s course, feeder drains feed waste water into it, reducing the river to a drainage pipeline. According to a study carried out by the Assam Pollution Control Board (APCB) in 2010, Bharalu and Bahini pass through the most populated areas of Guwahati. In the absence of adequate waste disposal mechanism in these areas, people dump solid waste into the water, worsening the pollution. An independent study by LakhimiGogoi, an academician associated with the NarangiAnchalik College, Assam, shows that the household waste generation in Guwahati is almost 490 tonnes per day. 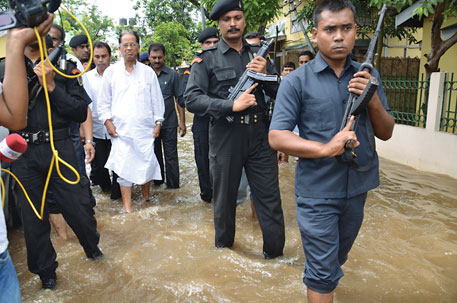 Even government bodies, such as the Railways, treat the river as a garbage dumping site. An inspection on February 11 this year by APCB officials found that the diesel shed of the Railways in New Guwahati releases untreated toxic effluent into public drains. This merges with the Bharalu, says R M Dubey, APCB chairperson.

“We routinely clean the river. But during monsoon the dug out silt slips back into the water. Another major problem is that as soon as the river is cleaned, it gets filled with plastic and other garbage thrown into the drains which flow into the Bharalu. These get collected in a heap near Bharalumukh pumping station-I. Most of it is non-biodegradable waste generated by business establishments,” explains D K Roy, a senior engineer associated with the water resource department which is tasked with cleaning the river. Government officials, however, blame the floods largely on the encroachment of the Bharalu. Over the years, illegal structures have mushroomed on its banks. The wetlands are not safe either. Silsakobeel, a protected water body, is surrounded by a grand multiplex housing a tennis court, a hotel owned by the Tata Group, a hotel management institute and over 1,000 small houses. 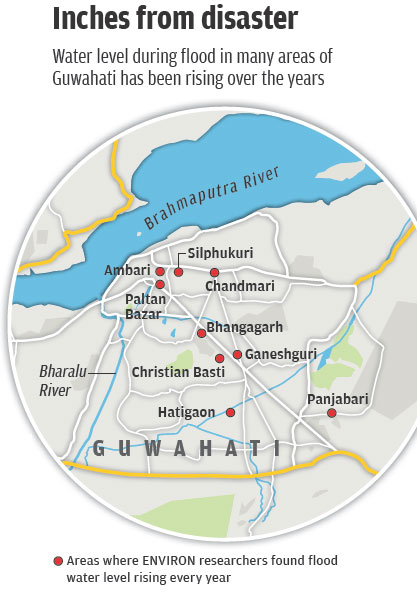 Researchers point out that the intensity of floods as well as the area affected by it in the city have increased. ENVIRON, a Guwahati-based research organisation, conducted a preliminary investigation from 2011 to 2013 in parts of the city—Hatigaon, Panjabari, Ganeshguri, Christian Basti, Bhangagarh, Paltan Bazar, Ambari, Silpukhuri and Chandmari (see ‘Inches from disaster’). The group concluded that the water level in these areas during flash floods associated with heavy rainfall rises by 7-15 cm every year. “If this condition persists, after 10 years the average height of the water will go up to 70-150 cm from the present level,” says AmarjyotiKashyp of ENVIRON. He adds that several areas in the city which were earlier untouched by water were flooded this year.

On being asked about this, PrateekHajela, commissioner and secretary to the Assam, government, political department, explained that fearing the possibility of floods, house owners in areas which are usually safe are raising the height of their compounds as precautionary measure. This pushes the rainwater on to the roads and contributes to flood, he adds.

Following a directive of the state government to clear the Bharaluriver and other water bodies in the city of encroachment, the district administration embarked on an eviction drive along the Bharalu from June 30. Hajela says that the state has chalked out a three-pronged approach. This includes clearing all illegal constructions around primary drains, simultaneous dredging and action against those who gave permission for construction.

The administration has also cracked the whip on encroachers around Silsakobeel. “We have dismantled illegal structures at the beel. We will continue with our drive to make way for smooth flow of water through Bharalu and other rivulets which carry excess rainwater from the city to the Brahmaputra,” says M Angamuthu, in-charge deputy commissioner of Kamrup Metropolitan district. He adds that there are similar plans of eviction for the three rivulets in the city.

Tall promises by the administration after floods are, however, an annual ritual.