Amongst the tsunami-affected in Nagapattinam, Tamil Nadu 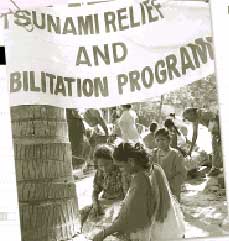 District hospital, Nagapattinam is just two kilometres (km) from the Bay of Bengal. On December 26, 2004, when the tsunami struck, the hospital's paediatric ward was swept away; there were no survivors. This hospital was our first call as volunteers in relief operations coordinated by the Chennai-based non-governmental organisation, Suyam: we were greeted by a thick muck carpet. It was January 2, 2005. The volunteers who were there for the past few days told us that 80 per cent of the muck was cleared off the previous day. The four of us had to scrape off the remaining 20 per cent. We were equipped with brooms and buckets and protected by masks. But our protective gear kept slipping away and every time that happened, we feared that we had inhaled a thousand germs.

The next task at hand was to revive the hospital's pharmacy. As part of a human chain we had to segregate the wet and soiled medicine boxes from the the dry and unspoilt ones.


It was January 3, 2005 -- more than a week after the tragedy. But medical relief had not reached Thopputari village, about two hours drive from Nagapattinam. We were armed with a small cache of paracetamols, antibiotics, tetanus injections and other first-aid material and ensured that the medicines reached the affected families. Here, Sudeshna got her first lessons in first-aid from the doctors who accompanied us.

The beach close to Thopputari village usually has golden brown sand. But the entire stretch was now covered in thick black mud and was littered with chunks of charcoal and dry flowers: the beach had turned into a burning ghat.

On our way back to the village from the beach, we met a naval officer who was flown in to restore the badly shaken naval base, near Thopputari. "There is a school near the base (we saw the school later)," said the officer. But its 500-odd students escaped unhurt: the tsunami had struck on a Sunday. "But that is small consolation," lamented the officer. "Every day we step onto a dead body and the swamp behind the school may have many more rotting bodies," he explained.

With heavy hearts we made our way back to Nagapattinam -- only to be caught in a traffic jam. A minister and his retinue were making their way to the disaster-affected areas. Politicians after all need to make their presence felt at disaster-sites, lest they lose the support of their constituencies!


In Nagapattinam, we got back to restoring the pharmacy, helping two other volunteers from Delhi: Richa Dubey who works with a non-government organisation, and Vivek Das, an employee of the pharma major, Ranbaxy. Every morning, a throng of people gathered at the pharmacy with long lists of medicines required by their communities. The store had a good stock -- donations had come from all parts of the country -- but it was in utter disarray. Vivek's stint in Ranbaxy had given him a fair knowledge of medicines and he guided us to group medicines according to their composition and usage. By January 4, 2005, there was some semblance of order. The six of us had managed to clean up the pharmacy and label every rack and carton.

Meanwhile, we also visited the mass burial grounds in Nagapattinam -- only to be told that there was little work for us. The district administration had used graveyards, open fields and even garbage dumps to bury bodies. But that was a hasty operation, the graves were not deep enough and there was reports of dead bodies resurfacing. So, the authorities had dumped huge piles of mud on them. One only hopes that the rains do not wash away the mud.

Once order was restored at the pharmacy, we made our way to Sikkal village, about six km from the hospital. The government of Tamil Nadu had started an orphanage for the tsunami-affected there. But since only one of the 21 children here needed medical help, three of us returned back to Nagapattinam. Sudeshna stayed back, only to witness the sorry sight of journalists subjecting the children to painful interrogation and photographers queuing up to take shots of their wounds -- the more gruesome the wound, the better the picture.

These pictures were splashed over the national media. Another picture stayed back with us: children playing on heaps of unused clothes. Nagapattinam's fisherfolk do not require these itmes of charity -- they only want their boats and nets back.