We found lots of muck

We found lots of muck 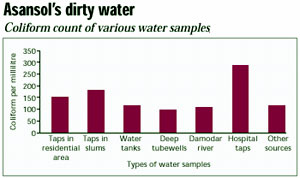 It isn't often that a post-graduate college decides to test the quality of water in its surrounding areas. In a five-month project begining January 2004, final year B pharma students of Gupta College of Technological Sciences in Asansol, West Bengal did exactly that. The students had to undertake a project in order to fulfill the requirements of their undergraduate course. The high incidence of water borne diseases such as jaundice, amoebiasis and colitis in the Asansol sub-divsion of West Bengal's Burdwan district impelled them to analyse the region's surface and groundwater.

A team of four -- Mrinal Kanti Ghosh, Arnab Mondal, Pranabesh Chakraborty and this author -- first collected water from different sources including the river Damodar, the main source of water supply of Asansol. Water from deep tube wells -- that are used for drinking and agricultural purposes in the area -- was also put under scrutiny, as was drinking water supplied to the local government hospital.

The samples were then put to different tests in the college laboratory; these included verifying quantities of salts such as chlorides, bicarbonates and sulphates (acute salinity renders water unfit for drinking) and ascertaining concentrations of chemicals such as nitrogen and phosphorous.

The researchers knew full well that arsenic poisoning of groundwater affects 19 districts of West Bengal. So they decided to check the samples for this chemical as well.

The concentration of the inorganic salts as well as chemicals such as nitrogen and phosphorous were well below the threshold level. Arsenic was absent in most samples, in a few samples it was present in small quantities -- far below the World Health Organization's stipulated limit of 0.05 micrgrammes per litre. Even dissolved oxygen levels showed no cause for alarm. But there was little solace. Coliform count of the samples was between 150-290 per millilitre (ml, see graph: Asansol's dirty water). This when the New Delhi-based Central Pollution Control Board specifies that coliform count in drinking water should not be more than 5,000 per 100 ml (50 per ml). Most alarmingly, water from taps in Asansol's district hospital was a high 290 per ml.

The chances of bacterial contamination of water were quite rife. The researchers then decided to undertake a sugar fermentation test to check this out. Sure as hell, the bacteria was there. The samples were tested positive for E.coli, Shigella and Enterobacter.

These bacteria are known to affect the human intestine. The contamination could have been caused by sewage mixing with drinking water. It could also have been a result of careless water treatment. Let us not forget that such neglect has already been reported in the treatment of Kolkata's drinking water.

Below-poverty line tribals constitute a major part of Asansol's population. They neither have the wherewithal to afford expensive water purifying devices nor are they aware of the contamination to adopt safety measures such as boiling water. Creating general awareness about water contamination could help improve matters. Proper sanitary measures, safe disposal of hazardous and biomedical wastes along with careful treatment of both drinking as well as sewage water by the government would go a long way in improving water quality and also the health of people of Asansol.