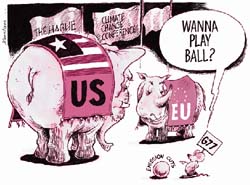 That was the question written across many tired and desperate faces after CoP-6 was suspended. The prospects for future agreement look particularly bleak in light of domestic us politics. If Republican George Bush becomes president, many fear that the chances of the us ever ratifying the convention will be lost forever. This view was promoted by the us administration, eager, as always, to get a deal that suits them through threats of what the us may or may not do if they don't get what they want. "I think it is fair to say that a pretty important opportunity was not cashed in," Loy said of the eu 's rejection of the final proposal.

Some European groups have also, since then, started blaming the eu governments for passing up an opportunity which may not come by again. But was the opportunity worth grabbing, or was it a forced and worthless agreement like the Kyoto Protocol? Would they really prefer a bad deal to no deal? As Voynet said, "What is victory? Is it a hasty agreement under pressure or the ability to say no?"

So far, the us has relied on its ability to threaten the world with non-ratification to get what it wants. The eu has always been a weak opponent, giving in at the last minute (and not just in the climate negotiations -- they quit their high moral ground rather quickly when attacked by the us -led "Miami Group" at the negotiations for the biosafety protocol negotiations in April 1999). The G77, meanwhile, has managed to sideline itself almost completely in the climate talks. Let alone being proactive in solving the global warming problem, which will eventually hurt them the most, they have not even been able to provide support to the more progressive positions of the eu .

With this background, the political message sent by the eu 's unwillingness to accept a badly compromised deal is tremendous -- for once, they are telling the us that their threats and bullying will not always work. That the us should no longer bank on hurried last minute face-saving negotiations to get what it wants. This newly discovered courage on part of the eu is probably due in part to developments on other fronts. The last two years have seen sustained trade battles between the eu and the us under the World Trade Organisation ( wto ), which reflect the very differences in culture that Voynet referred to -- while the us believes industry and business should rule, the eu has stood up for both regulatory and fiscal methods.

The civil society in Europe should support their governments for standing up against the us at CoP-6, not urge them to take whatever little the us is offering now, out of fear that they will offer even less in the future. The more practical European ngo s are already beginning to see the futility of endlessly compromising the climate negotiations to bring aboard the us . Why should the world go into contortions and compromise such a vital negotiation to accommodate the domestic politics of a nation which is not willing to face up to the reality that their much touted "American lifestyle" is posing a threat to the Earth's environment? After the compromises at Kyoto, isn't it time the world saw at least some proof that the world's biggest polluter sees the threat and is willing to take action to address it seriously?

Even a very diluted agreement offers no assurance that the us senate will eventually ratify the Kyoto Protocol. According to a November 27 analysis in Grist Magazine , a web magazine with its office in Seattle, usa , "Even if the Europeans hadn't stood tough, though, the document wouldn't have made it through the senate. Not with George W Bush as president, and not with Al Gore as president (though if Gore had carried Florida, these negotiations would have at least produced an agreement). And the reason is simple: the us public still does not believe with the necessary passion that climate change represents a problem serious enough to require any compromises in our way of life. "

Changing attitudes within the us is up to the us civil society, the very same ngo s and media currently so occupied with telling the rest of the world what to do and how to do it. How many us groups that were campaigning ardently against fossil fuel funding or nuclear power to developing countries at the CoP had similar campaigns in their own country? Not many. So the us continues to be one of the world's largest consumers of coal, while senior us delegates seriously consider stepping in to stop the World Bank from funding coal projects in the South. Perhaps it is time ngo s turned their attention homeward and picked up the courage to take on their government's hypocritical policies.

Reported by Anju Sharma, Neelam Singh and Sopan Joshi from The Hague