What car is this anyway?

Can a pumpset metamorphose into a motor vehicle? Somewhere out there in Haryana,they call this smoke-belching, spit-and-gum contraption a Maruta

What car is this anyway? 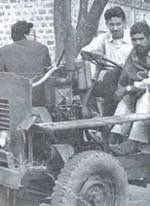 MOVE over, Montego and Daewoo. You're far too stick and soft for India's terrible terrain. Outside the cities in Punjab and Haryana, the highways - and the fields - belong to this rumbling, dyspeptic roadhog called Maruta, a contemptuous corruption of a simpering cousin, the Maruti. The Maruta is rural homegrown from rudder to axle: it's a defiant insult to every self-respecting automobile designer from Ford to BMW. But it's a contraption that would have done subaltern designmeister Victor Papanek proud. Because it works.

Ramjan Ali, 34, of Sahdei village, Gurgaon, is one happy man. His Maruta brings him Rs 300 a day, ferrying people, crops and cattle in daytime, powering his pumpset by night, irrigating the 2 ha of land he owns.

Gurgaon and Faridabad, the 2 Haryana districts adjoining Delhi, are now teeming with these wheezers. The Maruta was first invented - tacked together, actually - 10 years ago by some ingenious mechanics in Moga in Punjab. The creature is inexpensive to make, is fuel efficient (it uses diesel) and has the endurance of the Iron Horse.

The design is simplicity itself. A 10 horsepower irrigation pump is fixed in front of a sleekish - in bullock cart terms - flatbed wooden cart measuring 1.5 in by 2 in. The pumpset is the thudding powerdrive. A fan belt spins a camshaft attached to the rear wheels. Initially, it had no shock absorbers but the wheels were pneumatic enough to tackle India's giant highway potholes.

But over time, the Maruta brought with it unprecedented concepts of automotive luxury. Dismantling old jeeps, the rural innovators outfitted the vehicle with a 4-speed combination gearbox (3 front gears and I reverse), a radiator, leaf springs, rear brakes and, instead of the rudder, a steering wheel that needs a Hercules to turn. "With all these gadgets, the jugad (makeshift arrangement) has become a very good vehicle for the rural areas and is certainly better than the tempo (a diesel-run 3-wheeler)," says Jai Singh, a mechanic from Sohna, an idyllic hill town known for its hot springs.

Ramjan Ali bears him out. "I put just 5 litres of diesel in the morning and run it for about 100 km a day." Only 2 years ago he had bought the Maruta for Rs 33,000. A tempo would have cost him over Rs 60,000 and consumed twice the fuel. Besides, the long-snouted tempo can carry a maximum of 20 very uncomfortable passengers. Rarnjan Ali's Maruta can barge through some of the worst macadam in the world at 40 kin an hour, with 40 people jostling for space on it - almost as many as a minibus tan carry.

With fares ranging from Re I to Rs 4, the jugad, over the past 6 years, has evolved into a very viable public transport vehicle for the people in these villages, connected - if at all - by scarred, bumpy roads. Saifuddin, 62, of Rithora village, Gurgaon, often has to come to Nuh, the nearest town, to sell cattle: "Today, I manage to return to my village with the goats for just 3 rupees. Earlier, I had to walk all the way, which is not easy for an old man like me."

Like all good innovatiots, the Maruta is forced by unanticipated problems to constantly evolve. One recurrent problem with these motley assemblages is brake failure. "The small and weak washers fall apart wheh the brakes are suddenly applied on a bumpy road," says SA 'n@ ir Ahmad, 45, of Palwal, a small industrial town in Faridaba4 district. Repairs, he says ruefully, cost Rs 200 each time th4, go bust. Ahmad, however, has solved the problem. The ru6ber washers have been removed and nylon brake shoes fitted to the rear wheels. For a mere Rs 600, "1 can forget brake failures," he beams.

The collective determination to make this machine a success is amazing. Someone somewhere is con- stantly adding a bit here, knocking off a bit there. Mahipal, from Sohna, has been plying his Maruta for the past 3 years on the Sohna-Damdama road. Fed up with a frequently overheated radiator, he has replaced the small jeep radiator with a gurgling monster. And Raju of Hodal, Faridabad, is tacking on a car battery to replace the conventional dynamorun bulbs with more powerful and longer lasting halogen lights.

But these lights are also a dead giveaway. The police couldn't care less if these contraptions have solved a chronic rural problem - that of long-distance mobility. In purely legal terms, Marutas cannot be registered. So the cops have their own jugad - an annual bribe of Rs 2,000.