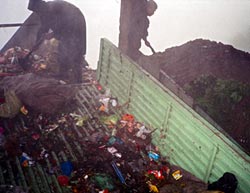 The stinky spectacle of hill-stations getting buried under their own garbage is turning more real. Look down the slopes and you will see mounds of coloured plastic bags, and tourist staples such as empty packets of potato chips and plastic water bottles. All of which is mixed with vegetable waste and debris, making the piles taller by the day. Municipalities merely collect the garbage from dust-bins, load it on tractor-trolleys, take it to the lowest point, and then tip the muck down the hillside. Their basic -- perhaps only -- motive is to keep roads clean for tourists to amble along, admiring the scenery.

Population growth is the chief culprit. More people means more waste. Though the number of people residing in and visiting these hill-stations has increased rapidly, there is no system to manage the muck they make.

What's worse, the nature of waste generated has also changed. Biodegradable waste itself takes longer to decompose in a colder climate, but the advent of plastics -- used as wrappers and for packaging -- has ruined the local ecology.

From time to time, various notifications are issued banning plastic bags in hill-stations, but most of these bans aren't implemented. Hill people blame plains people for the mess. "Why is the state government telling us to ban plastic bags? We do not manufacture them. They get manufactured at Siliguri. They should stop the production there," says a municipal officer in Darjeeling. Others are trying to curb the menace as much as possible: Sikkim has put a fine of Rs 500 on anyone found throwing waste in jhoras (traditional water drainage systems).


The solitary instrument of sewage management in most hill-stations is the septic tanks the British had built. These are used even today, without any additions. Hence, sewerage coverage is woefully inadequate. For instance, only 30 per cent of Gangtok has sewerage. The rest is disposed of in septic tanks, soak pits, or jhoras. About Rs 28 crore is required to upgrade Gangtok's sewerage system. But nobody knows where this money will come from.

Darjeeling's sewerage coverage is 35 per cent. The lacuna was brought to the state government's notice way back in 1985, when Kolkata-based Consulting Engineering Services (India) Pvt Ltd submitted its upgradation report with an estimated project cost of Rs 13.65 crore. Again no action resulted.

Such inaction is costing hill-stations dear. The waste finds its way into the rivers. That water is pumped back to meet the drinking water needs of their residents and tourists.