What has improved engine technology to do with it?

What has improved engine technology to do with it? 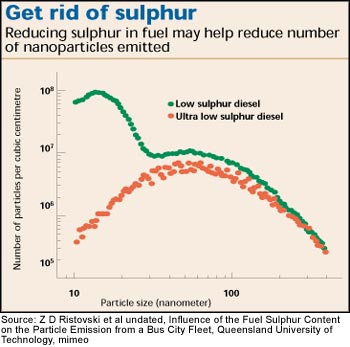 Improved engine technology and fuel quality has thus created a new debate. "Ironically, particle control regulations may have made the situation worse," points out Wexler, referring to increased nanoparticle emissions. Andreas Mayer, an engineering consultant based in Switzerland, does not quite agree. "Engine development does reduce the number of the larger particles but not increase the number of the smaller particles," he says. He however admits that there is a problem. "As a consequence, however, the average size of particles emitted by newer engines is smaller than the average particle size emitted by older engines. This might become a problem because if you have a mix of larger and smaller particles, the smaller tend to agglomerate with the larger ones but if there are fewer particles, but all small, they tend to stay separate which could prove a higher health risk," he says.

"Technical solutions aimed at reduction of total particle emissions do not necessarily result in concomitant reductions in fine particle emissions; in certain cases, the opposite effect is observed, resulting in increased emissions of fine particles," points out Lidia Morawska of Queensland University of Technology and her co-authors in an article in the reputed journal Environmental Science and Technology. According to Daniel Greenbaum, president of the US-based Health Effects Institute, "There does appear to be a relationship between control technologies and emissions of nanoparticles." When emissions from a 1991 diesel engine was compared to that of a 1998 diesel engine in a study conducted by institute, both run on very low sulphur diesel, the new engine showed dramatic increase in nanoparticle emissions. "Although the precise reason for that is not known, one of the contributing factors is likely that the reduction in particle mass gives the nanoparticles fewer large particles to combine with, and so they remain as nanoparticles," he says. He is however optimistic about particulate traps. "The good news is that these more efficient engines, when combined with a particle filter, appear to all but eliminate the emission of nanoparticles as well as reducing the mass," he points out.

"Engine technology plays a vital part. If the combustion chamber is well designed emission of the small particles is reduced," says Lennart Erlandsson of Sweden-based AVL MTC, a research and development and vehicle testing company. "Diesel fuel quality is not always important since formation of particles is more related to engine technology," he points out. According to Lennart, the recently launched petrol direct injection (GDI) engine produces a lot of particles -- sometimes even more than a diesel engine. GDI was developed in order to reduce emissions of CO2 and the engine is more similar to a diesel engine than a gasoline engine. "The best thing to reduce the small particles and also the total amount of particles is to equip the engine with a particle filter," he says.

According to tests conducted by the Scientific Research Laboratory of the Ford Motor Company, catalytic converters have less than 50 per cent effect on number of particles emitted by the diesel vehicle -- usually much less -- and a negligible effect on the mean diameter of the particles. Their test results in fact shows that an overwhelming number of particles do not even come into contact with the catalyst wall.

The authors also point out that measurement of the nuclei mode is not only difficult but depends significantly on the type of exhaust sampling used.


Diesel engines have always been highest emitters of toxic particles. However, results of studies across the world on the impact of cleaner fuels and engines on nanoparticle emissions are showing mixed results. Scientists are still not clear on the role these play in nanoparticle emissions. Mayer points out, " Conventional gasoline engines emit much less nanoparticles than diesel engines when running at part load. But at full load they can emit as much or more -- particularly the older ones. Direct injection gasoline engines are as bad as diesel engines except in their homogenous operation range." Even Compressed Natural Gas (CNG) engines have been found to emit nanoparticles." Lennart, however throws a spanner of caution on CNG. "Most of the particle emissions from CNG engines are results of bad maintenance of the engine and bad lubrication oil," he says. According to K Boulouchos of the Swiss Federal Institute of Technology, Zurich, "optimised premixed combustion, particularly with CNG as fuel helps achieve particle number concentrations in the engine exhaust comparable to laboratory air quality."

Maintenance of the vehicle also has a role to play. Points out Wexler, "Generally, diesel engine is worse than a gasoline engine, but it depends much on how well the vehicle is maintained."

When researchers from the Queensland University of Technology tested particulate emissions from vehicles run on leaded and unleaded petrol (ULP), CNG and Liquefied Petroleum Gas (LPG) they found that converting a ULP vehicle, which are already low particulate emitters, to CNG produced no significant change in the emission of nanoparticles. However, they found a significant reduction in polycyclic aromatic hydrocarbons (PAHs) and formaldehyde emissions when the vehicle was operated on CNG, along with a reduction in its global warming potential. Similar results were found in case of dedicated LPG vehicles.

A test conducted by the California Air Resources Board showed surprising results: It predictably revealed that average idle mode ultrafine total particle emissions from a CNG bus were 40-180 times lower than a diesel bus operating on ultra-low sulphur fuel. But it showed that at 55 miles per hour (mph) steady state driving, the CNG vehicle particle number emissions were 20 times higher. This did not change even when an oxidation catalyst was added to the CNG vehicle. The researchers however point out that they have not been able to identify the source of these particles. They speculate that lube oil composition and its consumption had a role to play in this.

According to researchers, similar emission levels of nanoparticles seen for same type of engine running on different fuels (ULP, CNG and LPG) indicate that the fuel type does not play a crucial role in nanoparticle formation, as long as the engine is properly tuned. They opine other factors like vehicle management system and the consumption of lubricating oil could play major roles in the particulate formation mechanisms. Thus the majority of the formed particles are either volatiles formed during the dilution process or solid ash particles from the combustion of lubricating oils, they say.

According to Mridul Gautam of West Virginia University, USA, reducing fuel sulphur levels alone may not be an answer to reducing nanoparticle concentrations in diesel exhaust emissions. Lube oil sulphur levels and additive packages too greatly influence size distributions and concentrations of particulate emissions, he says. He also points out that nanoparticles are generated as a result of highly complex interactions between fuel and lube oil hydrocarbon chemistry and sulphur content, engine operating modes, the exhaust dilution system itself (in addition to dilution conditions).