It is the tale of two European rivers. The Rhine and the Danube. No river system in the world has a density of industrial agglomerations comparable to that of the Rhine. The river connects the economies of some of the richest countries, while the Danube links most of the economically backward countries of eastern Europe. Both the rivers were polluted haplessly for decades. But a few industrial disaters later, countries realised that rivers do not have borders. They began considering water in its geographical, not political, context. International cooperation that ensued has now brought the rivers back to life. A report by Uwe Hoering 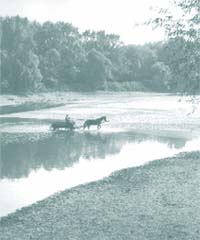 "I love rivers, carrying ideas as well as goods... of all rivers I most love the Rhine," said Victor Hugo (1839). But if the famous French author was to visit the Rhine 130 years later, he would have discovered a different kind of load. In the mid-1970s, when pollution of the river reached its peak, it carried not only thousands of tonnes of nutrients like phosphorus and ammonium every year, but toxic substances like cadmium, mercury, iron and other heavy metals, dioxins, ddt and chloroform, too, literally turning it into a sewer. One observer calculated that the amount of zinc discharged into the river annually would be sufficient to fill hundreds of kilometre long sewage drains. By the late 1950s, there were no salmon left in the river. But nothing seemed to bother the nine nations it flows through on its way to the North Sea, until the ultimate happened.

Disaster struck on the night of November 1, 1986. A fire broke out in the warehouse of the giant Swiss Chemical Company, Sandoz, near Basel in France. Highly toxic pesticides stored there mixed with the water, extinguished the fire and flowed into the Rhine. Fish and microorganisms downstream, as far as the Lower Rhine, were the first to be harmed. The public was alarmed, especially environmentalists who were afraid that the river would not recover from the disaster. It was only then that the mission to save "Father Rhine" got the necessary boost.

The International Commission for the Protection of the Rhine (icpr), which was set up in 1950 but was not so successful in protecting the river, launched the Rhine Action Programme (rap) the following year after the Sandoz disaster. The main objective was to reduce contamination from 45 substances by 50 per cent till 1995 (compared to 1955 levels). Since then, undoubtedly the water quality in the Rhine and its tributaries has improved considerably. In 1993, fisherfolk in Sieg estuary, a small tributary near Bonn in Germany, caught the first salmons, which had returned to the spawning grounds. Three years later, sea trout and salmon were caught several hundred miles further upstream. Father Rhine is surely on the road to recovery.


Castles dotting its way, vineyards up the steep hills, mediaeval towns, vast fertile flood plains and marshes in the delta - the Rhine has different faces. Originating in the glacial regions of the Swiss Alps, on its 1,320-km journey, it flows from the mountains to the North Sea crossing some of the most densely populated and industrialised areas in Switzerland, France, Luxembourg, Germany and the Netherlands.

Over time it has been made into a huge waterway. The river between Basle and Rotterdam in the Netherlands figures among the shipping lanes with the highest traffic density in the world. Worldwide, perhaps no other river system has the density of industrial agglomeration comparable to that of the Rhine catchment area. Big coal and nuclear power stations line the Upper Rhine in industrial regions such as Alsace in France and Ludwigshafen in Germany. Many chemical industries, refineries, pulp and paper units, potash and coalmines dot the river banks. Besides, almost 40 per cent of the catchment area is exploited for agriculture and viticulture. Big cities dump their wastewater into the river or its tributaries like Neckar or Ruhr.

Complaints about the Rhine having been turned into the biggest sewer of Europe started at the end of the 19th century. But the crisis peaked only in the 1970s, when many river fauna species started to disappear. Therefore, Rhine as a source of drinking water for some 20 million people was threatened too.

Draining effluents into the rivers was simply the cheapest way for industries to get rid of dangerous substances, which otherwise would have to be dumped on expensive hazardous waste depots or channeled through equally expensive treatment plants. Half-hearted attempts to force changes upon the industry by introducing wastewater fees had little impact - they were too low, therefore, in many cases it was cheaper to pay fines than construct treatment plants. Thus while private companies saved money, the taxpayer faced the brunt of the pollution. The cost of drinking water increased dramatically because more money was spent to purify it.

The Sandoz disaster was a grim reminder of the fact that it is not the polluter but the people downstream who suffer. The worst hit was the Netherlands. Nearly 40 per cent of the Dutch population is dependent on the Rhine for drinking water because groundwater is saline in most areas. Flower and vegetable farms, a pillar of the Dutch economy, had to spend huge amounts of money for desalination of irrigation water. In the 1980s, it was estimated that cleaning the Dutch part of the Rhine from toxic sludge would cost us $4 million. The city of Rotterdam alone had to annually dredge 10 million tonnes of contaminated sludge out of the harbour basin. During the 1980s, it was estimated that the Rhine contributed 40 per cent of the pollution load of the North Sea. Eutrophication triggered by nutrient run-off culminated in 1988, when carpets of algae covered the waters and huge heaps of foam were swept onto the beaches.


Initially, icpr had limited objectives, mainly to conduct a surveillance mission and to make an inventory about the state of the Rhine. Its recommendations were not binding for the member nations. Major agreements such as the Convention of Chemical Pollution and Rhine-Chloride-Agreement, which were signed in 1976, failed.

Meanwhile, the European Commission came up with some regulations. In 1970, a Convention on the Protection of Waters was agreed upon. The commission was instrumental in issuing guidelines for drinking water quality. Although international cooperation and implementation of agreements remained unsatisfactory, there were some improvements mainly due to individual efforts.

The 1980s saw a marked rise in public consciousness. Greenpeace, for example, equipped a ship named Belugao with modern laboratory facilities and sent it up the Rhine. Not content with water analysis, actions followed -- drains were blocked and protesters squatted in front of factory gates. One of the results was that documents, which were earlier considered secret, were published. This forced companies to change their production process or clean up their wastes.

The main contribution came from expansion of biological sewage treatment plants. For the construction of new and improvement of existing plants, icpr member states spent around us $60 billion between 1965 and 1989, when more than 90 per cent of the sewage from industries and households was being treated. As a result, the oxygen levels improved, allowing fish and other living organisms to recover. Nevertheless, fish caught in the river were still not fit for consumption due to high levels of heavy metals.


The Sandoz disaster made the public and the politicians aware of the timebombs existing close to their water supply. Earlier, accidents went nearly unnoticed. Shortly after the disaster, ministers in charge of Rhine conservation, held an emergency meeting. They agreed upon rap . It was understood that utilisation of the river water for drinking purpose had to be secured for the future.

To survey the measures, icpr installed a network of monitoring stations. Companies were asked to improve fire extinguishing equipment and install holding tanks, which would retain liquids accidentally spilled. The best available technology in waste treatment was made mandatory as well as disclosure of the amount and composition of all their wastewater flow.

At the same meeting, an ambitious target was formulated: the return of migrating fish, which earlier spawned in the upper reaches. "In the year 2000, there will be salmon in the Rhine again," they pledged. Since then the water quality in the Rhine and its tributaries has improved considerably. In its recent report, icpr states that in 1995 for five groups of substances, including ddt which was banned in 1972, as well as for 14 individual substances the target of reducing the concentration by 50 per cent had been reached. The toxic sludge in Rotterdam port went down by 50 per cent annually.

Today icpr 's main concern is with regard to "diffuse inputs of pollutants", which are more difficult to control. Agriculture is the main diffuse source for nutrients, herbicides and pesticides. Groundwater is heavily polluted by nitrates and agrochemicals and has already forced closure of several wells.

Renowned scientist Ernst Ulrich von Weizsacker said some time ago about the measure to protect the Rhine: "As far as the water quality is concerned, a success story seems to develop. Nevertheless, the ecosystem is still ill, physically as well as biologically. What is needed is a restoration of the ecosystem of the Rhine and its catchment."

icpr is aware of the new challenge. An ecological master plan for the Rhine was drafted in 1991. It aims at protecting the natural reaches along the Rhine, inter-connecting habitats in the river corridor, reconnecting backwaters with the river and restoring and developing sub-natural habitats for typical Rhine-organisms. Long list, but going by the salmon's return earlier than expected, the mission doesn't seem impossible.