Methan village in Sidhpur tehsil, Patan district of Gujarat saves 500 metric tonnes of fuelwood annually. They've been doing it for the last 15 years. This village is home to India's largest biogas plant, run by Silver Jubilee Biogas Producers and Distributors Cooperative Society Limited. "The biogas plant has been running since April 25, 1987, with minor repair works, and supplies gas to the villagers. Our cooperative runs the plant with no external assistance," says Kasimbhai Khan, former supervisor of the cooperative society 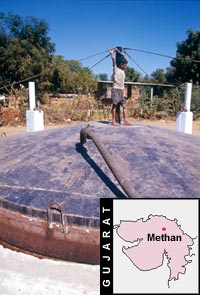 Methan village in Sidhpur tehsil, Patan district of Gujarat saves 500 metric tonnes of fuelwood annually. They've been doing it for the last 15 years. This village is home to India's largest biogas plant, run by Silver Jubilee Biogas Producers and Distributors Cooperative Society Limited. "The biogas plant has been running since April 25, 1987, with minor repair works, and supplies gas to the villagers. Our cooperative runs the plant with no external assistance. This is the largest biogas plant in the country," claims Kasimbhai Khan, former supervisor of the cooperative society.

Mehsana-based Dudh Sagar Dairy (dsd) and the state government's Gujarat Energy Development Agency had initially helped set up the plant. dsd officials approached the villagers with their plan for the plant, and educated them in the utilisation of cowdung to produce biogas. This, they said, would reduce both indoor pollution and dependence on firewood. With an aid of Rs 19.91 lakh from the then department of non-conventional energy sources (now, ministry of non-conventional energy sources) of the Union government, the biogas plant was inaugurated.

Everyday, one digester is filled with a trolley of cowdung that is mixed well with water in a mixer-well. The cowdung then passes from the mixer-well to the digester. The temperature inside a sealed digester is maintained at 35c to 55c. Microorganisms in the cowdung get metabolised at this temperature. The end products of the process are biogas and digested substrate.

Methan, with its high cattle population, is never short of cowdung. One trolley of cowdung weighs two and a half tonnes, and costs Rs 125. Dry waste, digested substrate, from the biogas plant is used in the fields as rich manure. This manure is sold at Rs 300 per trolley, and is much in demand in the village.

"When the plant was first used, it took 22 days to produce gas. Since then, it has been producing gas daily," says Kasimbhai. Two persons from Methan have been employed to run the plant. They are paid Rs 50 each per month. Biogas is transported from the plant to individual households through underground pipelines. Supply timings are fixed: 6 am to 8 am and then from 6 pm to 8 pm. "Fixed timings ensure that we can regulate use and wastage of biogas. In case we have to cook in between, we use kerosene. But that is rare. We prefer the smoke-free gas stove," says Reshamabehan, a resident of Methan.

All households that have biogas connections pay Rs 50 a month. "The gas charges must be paid by the 15th of every month. Those who pay before the 15th get a rebate of Rs 5," says Salimabehan, who has a biogas connection at home. Kasimbhai explains that this encourages people to pay on time. Apart from the monthly charge, every household pays one-time charges: Rs 100 for connection and Rs 200 for maintenance. As of now, 320 of the 500 households in the village are covered by biogas.

All households that are connected are members of the cooperative society. The management committee has 11 members, which has women representatives as well. While it is mandatory for the committee to have women members, no number has been fixed. This committee looks into the management and monitoring of the biogas plant. "We carry out repair work of the biogas plant on our own. For instance, if the iron of the digester gets rusted, we get it painted. Also, once the gas is made, the top cover of the digesters moves up and sometimes breaks. So we have developed structures to hold down the digester covers," says Imranbhai Khan, a member of the cooperative society.

The community manages the system; the plant uses local supply of cowdung; villagers use waste from the plant in their fields; the village saves huge quantities of fuelwood; and kitchens have cleaner, smoke-free fuel. Clearly, the biogas plant has changed more than just the way Methan cooks its food.