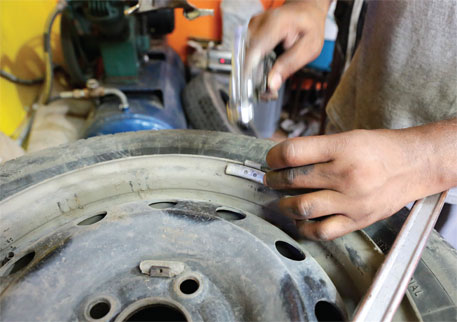 THE CAMPAIGN against lead-based products has failed to target one of the biggest sources of lead pollution— weights used for wheel balancing. The weights, which are put on tyres so that they do not vibrate, often fall off during driving. They then get crushed by cars and contaminate air and water bodies.

Lead is a neurotoxin that causes brain damage and is most harmful to children and pregnant women. Over exposure to lead can cause serious ailments such as wrist drop, also known as radial nerve palsy, memory loss, reduced sperm count in men and miscarriage in women.

The actual amount of lead pollution caused by the weights would be substantially higher because the weights are changed after every 5,000 km and are usually replaced every time a tyre gets punctured.

“Lead-based wheel balancing weights is a serious environmental concern and we have been mulling over how to check it. Since we cannot intervene in the manufacturing sector, we would have to deal with the issue at the point where the weight becomes waste, that is, when it falls off the vehicles,” says Vinod Babu, head of hazardous waste division, Central Pollution Control Board (CPCB). He adds that CPCB is working on a plan to deal with the issue and will soon write to the ministries concerned and also ask the automobile manufacturers to stop using lead weights. He, however, warns that a ban on the lead-based weights might not help. “India will need a responsible recycling programme to collect and safely dispose off the lead circulating in the industry.”

Lead-based weights can be replaced with zinc and steel, but most car manufacturers prefer lead because it is cheaper and convenient. C V Ganapathi Subramanian, managing director of Bharat Balancing Weights, says that except Europe, where lead-based balancing weights are banned, 80 per cent of the global market is ruled by lead weights. “Lead has high density, is highly malleable and cheap. While lead costs Rs.200 per kg, steel and zinc cost Rs.240-250 per kg.”

Some foreign automobile manufacturers, including Audi and Suzuki, are phasing out lead weights due to various environmental regulations in developed countries. As a result, some of the new vehicles launched in India now have either zinc or steel weights. “But the real issue is with the after- market sale of weights. Most of the car repair centres use lead. Zinc and steel are hardly used,” Subramanian says.

The other challenge for India is that only a handful of companies manufacture zinc or steel weights.

Deepak Gupta, owner of a workshop in Lajpat Nagar, says customers want lead weights because they are the cheapest. He thinks the government needs to start a campaign to sensitise people about the health hazards associated with lead. The campaign has to run along with CPCB’s plan of finding a safe recycling programme.

“Till then, lead-based weights will continue to be in demand,” says Gupta.