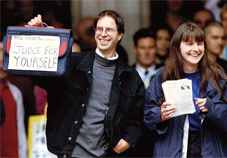 In 1990, McDonald’s threatened activists of a London-based ethical food group with libel suits. A pamphlet, What’s wrong with McDonald’s, had earned them the ire of the fast food biggie. Three of the activists from London Greenpeace—not to be confused with Greenpeace International, which distanced itself from the matter— apologised to McDonald’s and agreed not to circulate the leaflet. But Helen Steel, a part time bar worker earning £65 a week, and David Morris, an unemployed single parent, were dragged to a London court.

The case provided an opportunity for weighing up evidence for and against modern agribusiness methods. What’s Wrong with McDonald’s had a row of McDonald’s arches along the top of each page. Two of these arches bore the words “McMurder” and “McTorture.” McDonald’s claimed this tantamounted to slander.

In their defence, Steel and Morris quoted the leaflet: Mcdonald’s was responsible for the inhumane torture and murder of cattle, chicken and pigs. Under English law, the burden of proving (on balance of probability) the literal truth of every disparaging statement is on the defendant. This can be an expensive and time-consuming process. Steel and Morris were denied legal aid, as was policy for libel cases, despite having very limited income.

Over seven years, Steel and Morris called 180 witnesses to prove their assertions about food poisoning, unpaid overtime and the company’s misleading claims about recycling. The fast food giant had a panoply of lawyers and spent several million pounds. Steel and Morris spent £30,000.

The activists were not able to call all the witnesses they wanted, especially from South America who were needed to support their claims about the food giant’s activities in the continent’s rainforest. In 1991, Steel and Morris asked for legal aid from the European Court of Human Rights in Strasbourg. But the court ruled that as they had already put up a “tenacious defence”, they could not say they were being denied access to justice.

The long drawn case, however, did mean a lot of bad press for McDonald’s. It gave a fillip to anti-McDonald’s campaign in many parts of Europe and the Americas. The 760-odd page judgement was the final blow to the fast food biggie.

It rejected claims that McDonald’s was to blame for starvation in the Third World or had used lethal poisons to destroy areas of Central and South American rainforest. But in what was seen as a PR disaster for the corporation, judge Alistair Bell ruled that McDonald’s had “pretended to a positive nutritional benefit which their food did not match; had exploited children in its advertising and paid low wages, helping to depress wages in the catering trade”.

He agreed that McDonald’s is “strongly antipathetic to any idea of unionisation, makes workers work hard, with no guaranteed hours and often inadequate breaks and that the company’s workers are sometimes forced to work unlawful hours”. For their failure to prove all their claims, Steel and Morris were ordered to pay £60,000. They appealed the verdict and won further ground. The appeal judges ruled, “If one eats enough McDonald’s food, one’s diet may well become high in fat, with the very real risk of heart disease”. The payout was reduced to £40,000.

McDonald’s have never pursued the case and the offending leaflet continued to be circulated. In 2004, Steel and Morris launched an action against the UK government at the European Court of Human Rights, saying the lack of access to legal aid breached their right to a fair trial as guaranteed under Article 6 of the Human Rights Convention. In 2005, the court ruled in favour of the duo. It also held that the penalty violated their right to freedom of expression.