The tree court started out as a great idea, but is little more than a paper tiger today 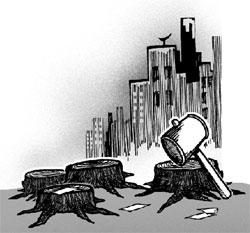 Bangalore's tree court was the first of its kind in the country. It was set up in 1994 at the initiative of an enthusiastic deputy conservator of forests (dcf), C Jayaram. Set up under the Karnataka Tree Preservation Act, 1976, the tree court would see trees of all shapes and sizes come to life in a wood-panelled conference room on the ninth floor of Karnataka's forest headquarters at Aranya Bhavan.

Tree court rules stipulated that any individual or organisation that wishes to fell a tree needs to obtain permission from the urban forestry wing. A forest ranger then looks into the claim, and a hearing date at the tree court is fixed. The court is presided over by the dcf, with the concerned forest rangers and tree wardens also present. The forest department (fd) selects tree wardens through voluntary applications from citizens. The area's tree warden is also required to forward a confidential report to the dcf on whether the felling is justified in a particular case.

Applicants who receive permission to fell a tree need to plant at least two saplings per tree felled, with a deposit of Rs 1,000 per tree to be made into the National Savings Certificate Scheme. Certificates are surrendered to the fd for a period of two years. These are returned to the individual once the fd is satisfied that the newly-planted saplings have been taken care of.

There is an interesting story, dating back to 1995, when the six-month-old court still had the refreshing aura of enthusiastic intent and commitment. A young man had come to court, representing his father's wish to cut a 50-year-old mahogany tree. He claimed that the tree impeded vehicle movement in his garage. The judge delivered a gentle admonition to the effect that if family members' quirks and inconveniences were tolerated, why couldn't the mahogany tree also be considered family and adjusted to? The young man smilingly accepted the sage advice.

Of late, though, Bangalore's tree court has been a mute witness to an unprecedented felling of trees, thanks to the city's almost explosive growth in recent years. In 1991, there were an estimated 10 million trees for five million people. In 2002, the number of trees for Bangalore's official (and conservative) estimated 7.5 million people "is anybody's guess", as a forest department official put it.

Monitoring of newly-planted trees has been very weak, with the result that official figures of trees planted do not coincide with reality on the ground. In 1999, for instance, bmp (Bangalore Mahanagara Palike; Municipal Corporation of Bangalore) received permission to fell 14 old growth trees on Murphy Road for road-widening, with the promise that it would plant 42 trees of different species 'in and around' the old tree areas. But there are no trees anywhere in sight. The horticulture department has no records of the number of trees the bmp has cut, but claims it has replanted 45,000 trees in various parts of the city.

The tree court's present chief, dcf Vijay Gogi says it is neither necessary nor possible to check whether civic administrations are keeping their replanting pledges. If authorities, like the bmp, put out press statements that they replant 60,000 trees in one year, one has no option but to believe them, he says. And while the common man goes through a bureaucratic rigmarole, the administration is exempt from submitting compensatory money on the plea that it does not have budgetary allotment for this!

The city police department is also known to have felled a large number of trees. The unofficial figure might be about a hundred says Gogi. He is not willing to dwell too long on this, though. Commissioner of Police H T Sangliana does not have more details either. "Anywhere between one and one hundred," is his estimate. He clarifies his stance thus, "If it's a decision between a human life and a tree, then I must choose human life."

However, there are a few tales of success as well. In 1999, tree warden Malini Shankar took up a successful public signature campaign, pointing out alternatives to felling 184 huge gulmohars on a two-km stretch of the beautiful Vani Vilas Road at Basavangudi.

This, in fact, is illustrative of a larger problem. The lack of adequate thought to long-term alternatives is at the root of Bangalore's problems. Complacency might just add to its woes.