The biggest threat to Vietnam's bio-diversity comes from deforestation. In the past 25 years, the total area of natural forests has declined at an average 350,000 hectares per year. To save its forests, the nation has evolved a two-pronged strategy: the creation of protected areas and an afforestation drive 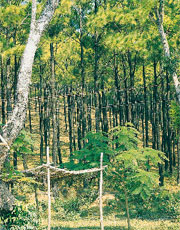 about 26 per cent of Vietnam was covered by natural forests in 1991, compared to 67 per cent in 1943. In the past 25 years, the total area of natural forests (both upland and coastal) has declined at an average rate of 350,000 ha per year. This has led to the loss of at least 12.6 million ha (mha) of forests -- 8.0 mha in northern Vietnam and 4.6 mha in the southern part of the country. The northern mountains have experienced the greatest decline, with the forest cover dropping from 95 per cent to 17 per cent in 48 years -- largely because of expanding farmlands and the need for forest products. The ministry of forests today has nearly 19 mha of land under its jurisdiction, but only 8.7 mha of this have a natural forest cover. Barren lands, which are denuded forest lands having very low agricultural productivity, now cover 13.4 mha -- nearly twice the area of cultivated land in the country.

Mountain ridges have been laid bare with only tiny pockets of forests clinging to the steepest slopes. Less than 10 per cent of the country's land area is still covered by good quality original forests. Of the remaining closed tropical forest area, just about one per cent is in a pristine state.

As tropical ecosystems have high species diversity but low densities of individual species, these small patches of forests may not be large enough to contain viable populations of each species. Areas of very large size (for example, 100,000 ha or more) -- which seem difficult to obtain -- will be needed. Species such as the wild buffalo, Eld's deer and the Sumatran rhinoceros are already extinct in Vietnam. Without urgent conservation efforts, the Asian elephant, Javan rhinoceros, tiger, kouprey, tapir and the sao la could meet with the same fate. In September 1996, four Vietnamese villagers re-discovered the splendid Edward's pheasant -- after nearly 70 years -- in the remote Bach Ma National Park in central Vietnam. The pheasant, last seen in 1928, had been listed as an extinct bird. Three scientific expeditions between 1988 and 1994 failed to find the bird. Experts argue that given the heavy human pressure around the park, the pheasant may really become extinct.


Since 1989, the Vietnamese government has embarked upon a reform programme called doi moi (innovative economic reforms). Before this programme began, the government had controlled internal migration of people and had encouraged 'sedentarisation' of shifting cultivators, which meant that many forests remained out of bounds for encroachers and thus, were protected. In the '60s, the government of North Vietnam encouraged one million people from the Red River delta to settle in the Northern Midlands and Highlands. This resettlement programme was ill-conceived and led to the unsustainability that today prevails in the Northern Midlands.

Following reunification and till 1989, the government of Vietnam kept a check on migration. Between 1981 and 1989, some 1.8 million people from the Red River delta and other coastal areas moved, mostly to the Central Highlands. But now the control of population movements has relaxed and become less rigid. Consequently, spontaneous settlements have increased substantially, especially in the Central Highlands. Moreover, liberalisation of agricultural land use has made it more difficult to control unsustainable use of land and forests.

In November 1996, the government admitted in an announcement that 'unregistered migration' had escalated in recent years, especially to the Central Highlands and the southeastern region, including Ho Chi Minh City. According to the department of forestry, illegal logging undertaken by migrants has resulted in more than 100,000 ha of forests being destroyed between 1991 and 1995 in upstream areas like the two mentioned above.

While doi moi has helped the poor generally through reforms in land and agricultural policies that have propelled Vietnam into becoming a major rice exporter, it has had a negative impact in the form of increased unemployment, which is now more than 13 per cent. The unemployment is the result of demobilisation and reductions in state-owned enterprises and government staff. In the future, these poor and unemployed people could contribute to and suffer from further degradation of the environment.


The issue of biodiversity has also raised the spectre of biopiracy. A Singapore-based company has reportedly collected some herbs used in Vietnam and patented several products from them. A variety of rice which displays a high resistance to blast (the crop disease) was collected by the Japanese from Thai Binh province during the Second World War. It has, since then, been used in 12 different countries to improve blast resistance in rice varieties; the Vietnamese, however, have come to know about the origin of this variety only recently.

"We need a law fast to protect our biodiversity and our knowledge from unlicensed commercial exploitation," says Ngo Ba Thanh, a lawyer based in Hanoi. Without such a law, Vietnam could easily stand to lose a considerable part of its herbal knowledge. At the danida workshop, several Vietnamese participants complained that many herbalists were extremely secretive about their herbal preparations. "They do not even share their secrets with their daughters because they move to another household after marriage," said one participant.

Many herbal preparations in Vietnam and other nations in Asia are made up of several ingredients -- sometimes as many as 10 -- with each playing a specific role in the treatment process. Dosage and method of administration is equally important. If the herbalist dies without sharing this knowledge, the treatment is lost forever to humankind. It is obvious that these herbalists will feel confident of sharing their knowledge only if they know that even if they divulge their secrets, nobody will be able to use them without their permission.

Waking up to the situation, Vietnam is now working closely with an Association of Southeast Asian Nations ( asean ) committee to coordinate its biodiversity policies. Vietnamese experts present at the danida workshop concluded that the country needs to take two key steps to protect and develop its biodiversity as a major source of revenue:

• It must set up a national committee to coordinate its internal biodiversity policies and programmes.

• It must develop international cooperation programmes with Northern countries, as well as with other Southern nations.

For instance, Vietnam's herbal enterprise is still largely limited to the informal sector. The country can learn a lot from India's herbal and cosmetic industry in the organised sector -- probably the largest and the only one of its kind in the world -- which has grown by leaps and bounds in the last decade. Herbal medicines and cosmetics have become major products in the Indian market. The companies which specialise in these products do not try to find active principles as Western pharmaceutical companies do, but concentrate on formulation techniques so that the herbal products are well packaged in easily available and usable forms like pills and pastes and widely available within the nation and abroad. Cooperation between Indian and Vietnamese industries could bring mutully beneficial results. P M Bhargava, an eminent Indian scientist who had visited Vietnam some years ago, had been deeply impressed by Vietnam's herbal gardens. He had, on his return, recommended to the Indian government to support Vietnam with a team of biostatisticians. As Vietnamese clinics had kept records of their patients who had received herbal treatment, such a team could help the Vietnamese identify a range of efficacious herbs on a scientific basis.

The road to sustainable development in Vietnam may prove to be more rocky than its road to victory over the armed might of the us . The most encouraging development in the nation -- after years of strife -- is the steady development of the civil society. The government has been setting up cross-sectoral associations concerned with environmental protection. Such associations now exist in Haiphong, Ho Chi Minh City and Hanoi (for example, the Hanoi Association for the Conservation of Nature and Environment). These associations can participate in government discussions on long-term environmental planning. Says Ngo Ba Thanh, "I prefer to work in an ngo because things move much more rapidly than they do in the government."