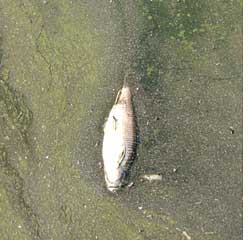 People come to the Bhima river in Pandharpur, Maharashtra, to rejoice. They leave behind a drain

Pandharpur, a pilgrim town on the banks of the Bhima river in Maharashtra, hosts four religious yatras every year. Over two million people take part in these yatras, which celebrate, among other things, four months (chatur maas) of Lord Vishnu's cosmic sleep. There is much fanfare associated with these yatras and during the celebrations people live in makeshift camps along the riverbank and sometimes on the road too.

But such arrangements have ended up polluting the Bhima, a tributary of Krishna river, on which over 500 villages are dependent.

Bhima is now reduced to a drain. Once considered the lifeline of people of Solapur district, the river has now become a dumpsite for sewage and effluents by sugar mills in the vicinity. The river's water is used for drinking and irrigation.The effects of pollution have started to show on Pandharpur residents. Health is the first casualty.

The yatras are as old as history. Yet there is no infrastructure to accommodate the millions of pilgrims who end up using the Bhima as an open lavatory. There is also no measure of how much untreated sewage goes into the river, said Mangesh Chitale, the chief executive officer of Pandharpur municipality. "There is no facility to check the amount of sewage generated in Pandharpur, so I cannot tell how much untreated sewage drains into the Bhima," Chitale added.

All of it is discharged into the Bhima.


The township, with over 150,000 people, does not have a sewage treatment plant. Each day, 12 drainage pipelines empty into the Bhima. Officials of the municipal council say they put in their best efforts to provide basic facilities to the devotees but their efforts always fall short of the demands.

July and November are usually the busiest months. "Prior to the yatras in these months, we declare that the Bhima is polluted and its water should not be consumed. People do face difficulties but we try and do our best," said Jagdish Patil, collector of Solapur.

The Pandharpur Municipal Council claims to be working round the clock to clean the town. "All of our 282 employees are engaged in cleaning the town to check the spread of diseases. We have a 25-member committee of doctors too," said Chitale, the chief executive officer.

Pandharpur residents said that was far from the truth. Even now, villages around Pandharpur are suffering from diseases, said villagers living in the Pandharpur taluka.


"Whenever we use Bhima's water, we develop skin infections. Doctors have certified that our problems are because of the contaminated water. Pollution has increased in the past three years. We are left with little choice but to pressure authorities to clean the Bhima," said Shivajirao Patil of Chandaj village, neighbouring Pandharpur.

Patil chairs an organization-Bhima River Anti Pollution Organization (brapo)-formed by people from several villagers on the banks of the Bhima.

Doctors in the town second villagers. "There is a marked increase in stomach problems and digestion disorders among people downstream of Pandharpur soon after the yatras. Kidney stones and skin infections are rising. We need to provide people safe drinking water. The state government has sanctioned Rs 100 crore for the same, but it is yet to reach us," said Anil Joshi, the chief health officer of Pandharpur municipality.

In 2008, Maharashtra government cleared a Rs 200-crore plan for cleaning the Bhima. Work on the plan is yet to begin.


The Pandharpur taluka has three sugar factories, which drain untreated effluents in the river. "There is an urgent need for a sewage treatment plant in Pandharpur to cater to other villages on the banks of the Bhima. If the sewage of these villages is treated, then it can be used for irrigation," said Sriniwas Vadakbalkar, geologist and principal of Dayanand College in Solapur.

The Maharashtra Pollution Control Board made it clear it did not have the required funds to set up a sewage treatment plant.

What about keeping track of pollution load on the river?

Neither the board nor the civic body has any data on sewage generation in Solapur. Ignoring these lapses, a member of the state pollution control board gave clean chit to the industries operating in the area.

"We test Bhima's water every month and there is nothing frightening about the pollution," said Limbaji Bhad, field officer of state pollution control board's Solapur office. "Whatever pollution load there is, it is because of the people who use the river. The percentage of faecal coliform is high, which is a human-made problem. Nitrates and ammonia in the river is also high and farmers are responsible for that," Bhad added (see table Bhima's water quality).

People refused to buy Bhad's explanation and maintained industrial pollution was the major factor. "The water quality of the river has deteriorated because of industrial effluents. We have complained to the authorities several times but to no avail," said Khandu Chavan, a villager from Kandar village in Pandharpur taluka.

Farmers said use of fertilizers by sugarcane farmers was also a cause of worry.

"We are over 3,000 people in the village and use Bhima's water for irrigation. Dead fish floating on the river is common and we have almost stopped fishing," said Agatrao Kamble, former sarpanch of Shevare village in Madha.

Villagers have given a memorandum on Bhima's pollution to the deputy chief minister and the prime minister, said Patil.

"We want the river clean."