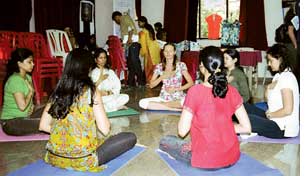 Deliver at home with trained midwives and avoid caesarean section

A belly dancer, tarot-card readers and yoga therapists, people not associated with childbirth, teamed up with midwives, masseurs and hypnotists at a mela in Mumbai last month to teach 60 women how to give birth naturally. Birth India, a non-profit established in 2007 to address the increasing number of caesarean childbirth, had organized the mela.

"On an average, caesarean section (C-section) births in the US are 23-35 per cent per doctor and people there raise a hue and cry. But it is much higher in India--between 50 and 80 per cent per doctor," said Ruth Malik of Birth India.

who claims C-sections per doctor should not be more than 15 per cent.

With trained midwives, one has the choice to exercise options for natural birth at home.The non-profit Birth India promotes alternative births such as waterbirth and hypnobirth. During waterbirth, a tub is filled with lukewarm water. The mother sits in this water-filled tub while delivering. The movement of the unborn is tracked with monitoring equipment. The moment the baby is born, its face is brought up immediately and the rest of the body can relax in the water if everything else is going well. Such babies benefit by tansitioning from amniotic fluid to warm water. Hypnobirthing involves teaching women to self-hypnotize and use slow breathing methods that coincide with the body's contractions during labour.

Red Miller, licensed midwife, said low-risk women, who do not have complicated health and obstetric history, could go for natural birth at home. A recent study in the Netherlands, published in International Journal of Obstetrics and Gynaecology, supports that planning birthing at home is as safe as planning birthing in a hospital.

"For home births to be safe, you need well-trained midwives who can administer oxygen to a baby (and very rarely to the mother) if necessary, a good transportation system with ambulances and a hospital within close distance," said Ank de Jonge, a researcher with the study that involved more than 500,000 low-risk women. "Cooperation between primary and secondary health care is important. In the Netherlands, women can be in hospital within 45 minutes after an emergency arises.

India also has a fair share of mothers who give birth at home--60 per cent. But are they safe? Do Netherlands-like conditions exist in India?

"We must not feel proud of home births," said P K Shah, secretary general of the Federation of Obstetric and Gynaecological Societies of India, Mumbai. "Such births are risky and that is the reason for the high infant and maternal mortality rates in the country." Shah is supportive of the Central government's Janani Suraksha Yojana, which encourages birthing at hospitals.

Doctors point out another fact typical of pregnant women in India. who's figure of 15 per cent caesareans per doctor is true for a healthy population, said Parul Kotdawala, who heads a women's clinic in Ahmedabad. The smaller pelvis in undernourished women increases chances of problems during delivery, he added. "Surgical intervention being good or bad is a personal assessment. The fact is C-section contributes to lower the number of maternal and infant deaths in India," said Kotdawala.

"Home births are safe only where there is a referral system, prompt emergency services, free availability of blood, medicines and access to surgery," said Parul Kotdawala, who is training midwives. This requires amazing resources and backup, he said. "In Sweden the government pays for all deliveries. It paid over Rs 1 lakh per delivery to hospitals three years ago. Compare this to India where the government pays Rs 1,000-2,000 per delivery to private doctors."

The debate remains unresolved. Studies in Europe and North America showed no significant difference in mortality rates between home and hospital deliveries. Others in Australia and the US have shown higher risk of prenatal mortality in planned home births compared to hospital births. In India, most deliveries and deaths happen at home for lack of support and infrastructure. A well-trained midwife in every village could make home births safer.