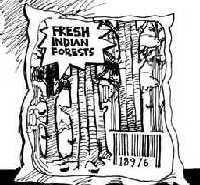 differences between industrial concerns and non-governmental organisations on the formulation of the Plant Variety Protection Act ( pvpa ) were the highlight of the first public hearing on patenting of genetic resources and traditional knowledge systems. The hearing, conducted by the People's Commission on Biodiversity, Indigenous Knowledge and People's Rights, began on August 5 at the India International Centre, New Delhi. Set up by the Delhi-based Research Foundation for Science, Technology and Ecology, the panel has begun sorting through the conflicting opinions and suggestions placed before it by a cross-section of society.

The panel, consisting of justice V R Krishna Iyer, justice Kuldip Singh and justice R S Sarkaria, will submit its findings and make suggestions after hearing out concerned groups on the drafts of the pvpa , amendments to the existing patent law, and the biodiversity legislation. The Union government will have to enact these laws by 1999 as per the requirements of the World Trade Organisation ( wto ) and the Convention on Biological Diversity ( cbd ).

Submissions to the panel focused on three issues: a model law for the pvpa ; whether India should allow patenting of life forms; and how should the biodiversity bill be drafted to ensure that traditional knowledge systems thrive and local communities prosper. The bills have been drafted a number of times by the ministries concerned but the response was mixed.

While the industry lobby favoured a draft of pvpa based on international guidelines, non-governmental organisations and activists accused the government of rushing through the drafts to please developed countries without taking into account the rights of local communities. Suman Sahai, convenor of Gene Campaign, a New Delhi-based ngo , was strongly in favour of a sui generis law that takes care of conditions that apply specifically to a country. India's main concern is food security and taking care of the interest of farmers, she said.

However, industry representatives rooted for a law that follows an internationally accepted pattern. R S Arora, secretary of the Seed Association of India, said that India would have to follow the international convention called Union for the Protection of New Plant Varieties ( upov ) - which gives exclusive property rights to plant bree-ders and restricts use of patented seeds by farmers - if it wanted a legislation to be accepted by the wto. This was vehemently opposed by former bureaucrat Muchkund Dubey. He said the government would be pushed into accepting patents on all life forms if it tows the upov line. On the form that the pvpa should take, groups like the National Working Group on Patent Laws favoured the 1970 Indian Patent Act. The farming community, represented by five farmers from Haryana, had nothing to say on cbd and wto . They were concerned about the disastrous impact of chemical fertilisers and pesticides on their lands. Governments' policy of promoting the installation of water pump sets also drew flak. "The ground water level has dropped alarmingly," complained a farmer.

Most of the respondents agreed that India should not accept patents on life forms. There were differences of opinion on whether the amended law should recognise patents on medicinal, especially plant-based products. The Indian Patent Act grants patents on drug manufacturing processes, not products. Even European countries such as Italy and Spain adopted patents on drug products only in the early '90s and India is in no position to follow suit, said Sahai. But G V Satyavati, director-general of the Indian Council of Medical Research, New Delhi, pleaded for patenting of Ayurvedic products. Defining their manufacturing processes is very complex and time-consuming, she said.

On the biodiversity legislation, Darshan Shankar, director of the Bangalore-based Foundation for Revitalisation of Local Health and Traditions said that codified knowledge systems like Ayurveda shastra were already in the public domain and converting or transferring them to the private domain to assert the rights of individuals may turn out to be a complicated exercise."Experience has shown that an attempt to mix the two can add to the abuse of the traditional system," said Shankar. On the question of the responsibility of management of bioresources by local communities, Ashish Kothari of the Indian Institute of Public Administration, New Delhi, said that government policies should be more responsive to people's needs. " cbd gives us a forum to fight against the blatantly pro-West Trade Related Intellectual Property Rights formulated by the wto ," he said.

Some of the complaints raised by the participants, however, did not seem legitimate. A group of 'slum women' ushered by a social worker raised a hue and cry about foreigners 'taking away' their very own neem . No patent has been granted in any part of the world on neem till date - only on the processes of manufacturing products from its extracts.