Despite several government programmes, cotton cultivation is riddled with problems 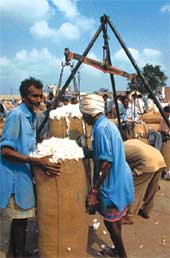 cotton is referred to as Tella Bangarum , or white gold, in ap . India has the largest area under cotton cultivation in the world, about 75 million ha, but is fifth in production, which stands at 13,500,000 bales per annum. "The average cotton productivity of the world (552 kg,ha) is significantly higher than that of India," says P C Bansil, director, Techno-Economic Research Foundation, New Delhi. In ap , it covers an area of 0.63 million ha, with a total production of 137,000 bales per annum. Major cotton-growing districts are: Guntur, Prakasam, Khawmam, Nalgonda, Adilabad, Kunrool and Warangal.

A ll the four cultivable species of cotton in the world -- Gossypium hirsutum , G barbadense , G arboreum and G herbaceum -- are grown in India.Approximately 60 million people depend on its cultivation, marketing, processing and export for their livelihood. Exports of cotton, its products and by-products earned the country Rs 6,000 crore in foreign exchange in 1994.

The best part of Indian cotton is its extreme diversity and ability to grow under extremely divergent agroclimatic conditions, though its yield potential is low. It is sown throughout the year in different parts of the country. A lot of hybrids of the four main cultivable species - about 80 varieties in all - are also cultivated. The major cotton growing states are Punjab, Haryana, Rajasthan, Maharashtra, Gujarat, Madhya Pradesh, Andhra Pradesh, Karnataka and Tamil Nadu.

Since the First Five-Year Plan (1951), the government has given priority to cotton research and production. Over 46 years have gone by, with nothing to be proud of. With the largest area under cotton production, the average yield per hectare is still below the global average, even though inputs are intensive. Pest attacks are now taken for granted. Pests survive pesticides. Pest resistant varieties remain a distant dream.

To step up cotton production from the Seventh Plan (1985-90), the Indian government is implementing the Intensive Cotton Development Proramme (icdp) in 11 states. It includes the integrated pest management programme (ipm). "The icdp is being implemented in a uniform manner and is not location-specific, as it should be, since constraints and problems are location-specific," says Bansil. In Punjab and Haryana, the problem is of rising water table; in Tamil Nadu it is scarcity of water. "In ap , too many varieties are being cultivated. This creates problems for the supply of government-certified seeds and efficient control of pests and diseases," he explains.

Indian varieties of cotton have been replaced by new varieties that are more responsive to nitrogen fertiliser, but more vulnerable to predatory pests. Now, all cotton growing states complain that G hirsutum (an American variety) is input-intensive and highly risky. The improvement in yield is at a price: it requires 150-200 kg/ha of nitrogen fertiliser. Moreover, its susceptibility to pests demands large amounts of pesticides, which means additional costs. The production levels achieved after all this do not justify the rising input costs and labour charges.


The importance of pest control in agriculture has been recognised by the government as far back as 1945, when the Indian Famine Commission concluded: "If full benefits of irrigation, manuring and improved varieties are to be assured, effective action must be taken to deal with diseases, pests, worms and weeds... crop protection is an important factor..." Accordingly, the Directorate of Plant Protection, Quarantine and Storage (dppqs) was set up in 1946 at Faridabad, Haryana, under the Union ministry of agriculture. One of its tasks was to introduce innovative technologies such as the ipm programme. Training and research centres were established in 1957-58, and work initiated in 1981. A number of policy changes followed. The outlay for the ipm programme in the Eighth Five-Year Plan was raised to Rs 4.5 crore from Rs 0.312 crore in the previous one. Human resource development programmes were initiated for field trainers who were to then train the farmers. The government promised to phase out subsidy on pesticides and to extend the revenue to the ipm programme. This, it promised, would promote the production of biocontrol agents and help phase out or ban the use of hazardous pesticides.

ipm is an ecological approach to manage pests.

Control methods deal with cultural, mechanical, biological and chemical practices. It is based on selective and timely application of pesticide and use of biological agents, including mass production and large-scale field release of natural predators of pests.

Sucking pests like the white fly are checked by their predators and parasites. ipm programme for cotton has been demonstrated to be technologically as well as economically viable for the farmers, reducing the use of pesticides.

The dppqs claims to have trained 12,000 field workers and 77,000 farmers. The ipm unit for the icar claims to have a successful package for cotton, which includes measures to deal with the infamous Spodoptera litura. Yet, training, awareness and all, the extension workers have failed to guide farmers towards ipm. "Farmers want their crop protection to be an instant kill," says Raheja. "They do not want to play the wait-and-watch game with pests, waiting for slow acting crop protection agents to act, and then use pesticides as the last resort," he adds.

" ipm is a location-specific and self-regenerating system, and will work only if there is a mass movement," says M C Diwaker, director of ipm at the dppqs. "The pesticide lobby pumps in new and more potent agrochemicals to manage resistance, thus creating further problems. Pesticides do not offer any long-term solutions to the pests. Rather, they create problems for long. ipm , on the other hand, augments natural predators, increasing biodiversity," he adds.

But farmers will not change their practices only for scientific reasons. They need to be convinced of the economic viability. " ipm has yet to be adequately demonstrated to the satisfaction of farmers," admits Raheja. Despite having 32 central surveillance systems for pest monitoring and forewarning, information provided is inadequate, and the application of pesticides akin to a post mortem, feels Diwaker.

All provisions exist - laboratories to check the quality of inputs and extension workers to advise farmers, among others. "Over 200 extension workers have been trained in ap itself, who have in turn trained thousands of farmers. Yet, what is the effect? Do you think any more of them is going to make a diffe-rence? When provisions are in place, obviously something is seriously wrong in our implementation that needs to be given serious thought," says Tewari.