Who dares trash them?

Who dares trash them? 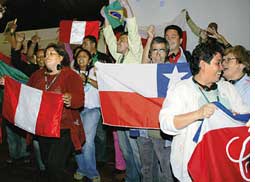 Sometime in 2007, history was unmade and made. From being a global village, the world became an urban conglomerate for the first time since life on earth began, more people on the planet lived in urban settlements than in rural ones. This shift in human habitation behaviour amplifies many microtrends. Informal sector recycling is one. In several larger urban settlements, many of the poor are quite likely to earn their livelihoods through waste handling waste, waste-picking, waste-sorting, repairing discarded items, perhaps even waste trading.

We know from case studies around the world that a few of these waste handlers cease to be poor because they are able to tap the wealth from waste. Most others, still poor, are able to survive and feed themselves, earning minimum wages--an improvement from poverty in the village.We also know, from discussions with recyclers around the world, that most of them--particularly wastepickers--are struggling fiercely to protect their livelihoods. Such struggles and strategies to succeed were the banner headlines at the end of a low key conference in early March this year in Bogota, Colombia.

This was where wastepickers from across the globe met at the event defiantly termed, "Wastepickers Without Borders." This was also the Third Latin American and First World Congress of Wastepickers. Hosted by the Bogota Association of Recyclers, federated with several other wastepickers cooperatives, this meeting was intended to begin a global dialogue process.

The last decade has resulted in broader consensus about what cities should look like, and how. These dream cities are now called world class cities. They don't really exist anywhere, but many cities are hurtling rapidly towards such fuzzy ideals. (Almost) everywhere, bigger cities are like models on a ramp--strikingly similar to each other. Many other urban agglomerations, relatively poorer and less able to construct their own dreams, aspire--officially--to such homogeneity.

Such large scale, simultaneous and in some cases, forced growth require circuits that enable information and capacity flows within to those wired in. From these information flows emerge templates that replicate patterns for the ideal city. Included in this package are urban services and, within this, solid waste management. Hooked into these circuits are policy makers, municipalities, donor agencies, urban 'specialists' and occasional researchers.

Two things happen here. First, the developing world tends to pick up dominant trends that are formally showcased by city governments or donors. Some are from more affluent parts of the world. Mayors from the developing world set up study tours to the developed world, where they learn about official systems and processes. These ideas leave little space for embracing domestic innovation. Since the learning is mostly restricted to officialdom, the contributions of side actors are diminished. Even in San Francisco, for example, a city progressive about handling waste, there is little discussion about the homeless who pick out and sell aluminum cans from the trash to formal recyclers. All over the world, the informal sector is kept out of official discourse.

Second, when such knowledge is channelled for implementation at the ground, it is already primed by dominant networks and ideas, but uninformed by any meaningful public participation and scantily accountable to larger public demands and needs. Consequently, there are large schisms between policy fixes and their repercussions on the ground. 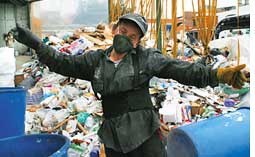 The schisms occur because the poor aren't part of these knowledge and feedback networks. In the case of solid waste, the informal recycling sector is severely devalued, if it is noticed at all.

Such invisible and unsung presence was an important context and driver for the Bogota Conference. After all, one per cent of a developing city's population earns a livelihood from handling and recycling waste, but formal knowledge circuits shut them out. More urban dwellers, many of them poor, and more value in increasing amounts of waste, translate into huge numbers not able to participate in plans about their own future.

The outcomes of such urbanism were discernible in many discussions at Bogota. From Turkey to Egypt to India and Venezuela, wastepickers explained the circumstances of their dislocation via institutional shifts. Many such shifts are designed to cope with increased waste generation, higher standards of cleanliness than ever before and the consequent turn to large private companies. There is no place for wastepickers in this matrix.

The narratives are globally comparable. A Turkish Kurd, president of the wastepickers' association, finds himself doubly vulnerable--as a hated minority and as a wastepicker. He and his colleagues are beaten up by municipal officials if they don't sell their recyclables to the private company of the municipality's choice. They are not alone in their miseries. In Venezuela, for example, a Kafkaesque tale unfolds under Hugo Chavez's hypothetically pro-poor regime. A group of wastepickers are forced to work for no social security and poor wages at a plastic recycling factory, subcontracted by the government to a private agency. The agency encourages them to join a local co-operative, but this is actually controlled by the company, a fact no one knows when they join. After several months of suffering horrible working conditions, the wastepickers take over the factory. Then the state steps in and they give up their sit-in. Now, they are asking to be allowed to run the recycling plant--they know how to do it well. Think of it in a country dripping oil revenue, it's that hard for the poor to recycle waste plastic, the stuff that is itself made from the low end of the petrochemical pile. In Colombia, a leading figure from the wastepickers association, Nora Padilla, ticked off government officials for disguising basic rights, which the wastepickers fought for very hard, as patronizing concessions from the state.

Creating a network is not about swapping stories alone. It is also about amplifying a voice and breaking into formal knowledge circuits. Bogota was important because it was able to build a global consensus on demands mostly linked with access to legitimate and formal waste-based livelihoods. As the components of waste become more lucrative, the competition becomes stiffer, stripping the poor of their livelihoods further. Creating a common charter wasn't as simple as it sounds, given the sheer diversity of participants and their specific contexts.

Music, celebration and visual imagery were important in such multi-cultural communication. This polyglot quality also made the declaration more powerful, because, although it didn't subscribe to a global cookie-cutter alternative, it was able to talk (global) templates, created through a process of communication.

A network of wastepickers becomes so much more complex because of the social transformation that underpins its larger vision of equal citizenship. Even after policy makers become more inclusive, public hostility to people working with filth is likely to remain. Unlike, say, street vendors or fishermen, waste-pickers will have to overcome historic stigma to be really be included in the everyday functioning of cities. A network, brimming with global success stories, can be an effective tool.

The processes at Bogota revealed how much the wastepickers had in common--their losses were comparable and so were their battles. The successes they shared were not given, but got, through organizing. And in fact, most of the wastepickers there were part of an organized structure, which is also why they were able to organize funds for their travels. The physical presence of wastepickers and in some cases organizations representing them, from 40 countries was a substantial cross-learning. For some wastepickers, that was a significant eye-opener too. Many from outside Latin America were astounded by the sheer organizational sophistication of their host continent. An Indian waste-picker--there were only two, alas--was fascinated by how healthy and well dressed waste-pickers from Latin America and Egypt were.

Every group present had a great distance to cover. Groups in Colombia mentioned they had organized only three per cent of the total wastepickers they think exist. The Bolivians are only just starting out. Ethiopian wastepickers only recycle plastics--they must expand their revenue streams.

The best any network can provide here is precedence. It must exert in other directions.

Bharati Chaturvedi has worked with the informal recycling sector for 14 years and is the Co-founder and Director of Chintan Environmental Research and Action Group. email bharati@chintan-india.org