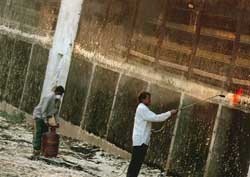 From all accounts, the central government was fully equipped to deal with the possibility of an outbreak of avian influenza. The systems for surveillance and monitoring were supposed to be in place. Events in the first two months of the year proved otherwise.

On February 18, the Indian government officially declared that avian flu had hit Navapur taluka of Nandurbar district in Maharashtra, after the country's topmost animal diseases lab -- the Bhopal-based High Security Animal Diseases Laboratory (hsadl) -- confirmed that the h5n1 virus was found in samples collected from birds that died in large numbers. Navapur has 52 poultry farms housing more than 14 lakh egg-laying birds. The government apparatus had moved into the area two days before, as the authorities suspected that the disease that caused the large-scale deaths was avian influenza. To control the disease, the state government ordered the immediate culling of the rest of the birds in the locality. The Gujarat government took similar steps in Uchchal taluka of Surat district, bordering Navapur, even though no mysterious death was reported there. According to who, India is one among 13 countries in three continents that reported the first outbreaks of the disease since the beginning of February.

But the February date is misleading. It now appears that deaths from bird flu in the congested poultry district began much earlier -- in the middle of January. The government told the World Organisation of Animal Health (oie) that the outbreak could be dated to January 27, but poultry farmers in Navapur -- most of them refuse to believe the disease is bird flu -- that the spate of bird deaths began around January 15.

The authorities are blaming poultry-owners for not informing them about the epidemic. An estimated 55,000 chickens died in a single farm before the authorities were taken into confidence. Nandurbar collector Jayant Gaikwad told Down To Earth (dte) that he has sent show-cause notices to poultry farms in the area asking them why hadn't reported the high fowl mortality immediately. Venkateshwara Hatcheries (vh) was also indicted because as one of the largest suppliers of chickens, feed and vaccines it had not alerted the authorities. vh chairperson Anuradha Desai, also president of the National Egg Coordination Committee, argued that the poultry deaths were caused by a virulent form of the common Ranikhet disease, which does not affect humans.

The poultry industry, spearheaded by vh, said it had tested samples of dead birds and found the 'Ranikhet' virus, not h5n1, supported by test report No/ dis/p.d.d.l /35/532-35/2006 from the state government's Pune-based Western Regional Disease Diagnostic Laboratory's dated February 16, for samples collected from Diamond Poultry Farm on February 10-11. The report said: The characteristic lesions in dead embryos for Ranikhet disease has been observed and confirmed. In sharp contrast, hsadl in its report submitted to the central department of animal husbandry and dairying on February 18, confirmed the presence of h5n1 virus in eight of the 12 samples sent to it on February 10 from Navapur. It is on the basis of hsadl 's report that state animal husbandry minister Haji Anees Majeed Ahmed declared a bird flu outbreak on February 18. But vh and the poultry farm owners in Navapur don't accept hsadl's report. "There is no bird flu in Navapur. Hasty declaration by the government is only going to bring bad name to the Indian poultry farmers and the country itself. Almost every year due to weather change fowl suffer from Ranikhet disease and die. The same happened this year when from January 15 fowl in Diamond Poultry Farm started dying and within a few days mortality figures touched 55,000 out of the total 70,000 birds in that farm. Tests conducted on dead fowls prove it is Ranikhet disease and not bird flu, " says Ahmed Pathan, owner of Pathan Poultry Farm, which till February 20 housed over 22,000 layer-hens. All of them have been culled.

For obvious reasons the poultry industry is in denial, including vh. "Almost 95 per cent of the poultry industry in Navapur is in the hands of vh, which is the sole supplier of chickens to farmers here. It also supplies medicines, vaccines, poultry feed, etc. Fowl are dying on a large scale since the beginning of February. But what set the alarm bells ringing was the discovery of about 700-800 dead fowl in gunny bags thrown amid bushes about 7 km away from Navapur town in Sawret village on national highway 6 on February 7. We immediately complained to the police station and the mamlatdar . A police case was filed and a doctor from vh was called to collect samples and test them. Later, when we asked the doctor, he claimed it was Ranikhet disease. But we are local people and know that it cannot kill so many birds in such a short time. In three days over 55,000 birds died in Diamond Poultry Farm. We are sure that vh has lied to the people and the government and tried to suppress information and evidence on bird flu," alleges Aijaz K Sheikh, a local politician who has been tracking bird deaths since early 2005.

This is especially dangerous because the impoverished poultry workers in Navapur have been handling dead birds without protective gear. Their malnourished status and close contact with infected birds can enhance their risk of infection.

More dangerous than the poultry industry's cover-up is the problem of the resistance to tracking domestic fowl in surrounding villages. Assessing the danger there is even more problematic. Fear of the government's belated clean-up measures has reached such levels that when a dte correspondent tried talking to some villagers who had a few country chickens, they refused to acknowledge ownership. "We neither rear fowls nor eat them," is a common refrain in Navapur.

The government has not helped set the confusion at rest. With too many contradictory statements doing rounds, Maharashtra chief minister Vilasrao Deshmukh on February 21 issued a gag order against his own officers directing them not to talk to media about avian influenza. He has made Bhushan Gagarani, head of the directorate-general of information and public relations, the sole official spokesperson on the bird flu outbreak. Then, at a press conference on February 20 at Nandurbar, Deshmukh differed with his animal husbandry minister on whether bird blood samples have been sent to a London laboratory for retesting, denying his minister's media briefings. The gag order did not help explain why despite the surveillance system set up by the government, it did not know that 55,000 birds had died by early February.

Debates about systems can go just so far, but the question is whether the measures initiated can help contain the disease in human terms. M P Yadav, director of the Indian Veterinary Research Institute (ivri), Rae Bareli, who was one of the experts who confirmed avian flu, says: "Some birds have gone and nobody knows where they have gone. This is a subject of investigation." Another expert, virologist T Jacob John, sounds an alarm. There is so much of the virus in the environment that several people will be infected, he says. We don't yet know how long the h5n1 virus can lie dormant, before showing up. Besides, since action was delayed the virus could have travelled to other places through eggs and egg trays, experts say.