Who messed it up?

Who messed it up? 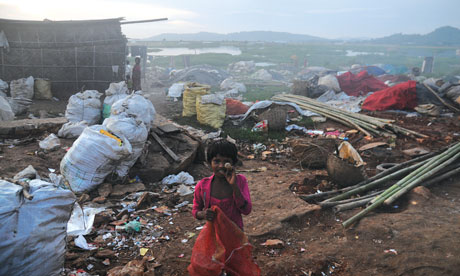 The overpowering stench of municipal waste hits one hard on entering Boragaon. Women and children from the nearby squatter’s colony squabble over the garbage unloaded by trucks from Guwahati, the sprawling business hub of northeastern India and a million-plus city of Assam. A sole adjutant stork, an endangered bird, meditates on the high rise of waste before being chased away by a dog.

The 24-hectare (ha) municipal dump yard lies on the eastern corner of Deepor, a biodiversity-rich wetland near Guwahati. It is also the lone Ramsar site in Assam. Wetlands of global importance are conserved and protected through the international treaty, Ramsar Convention. The dump yard came up in 2005, three years after Deepor was declared a Ramsar site.

Wetlands are the kidneys of nature, says Parimal Bhattacharya, former professor at Guwahati University and member of the Wildlife Trust of India. “They recharge groundwater and serve as storm water deposits. People depend on them for fishing and agri- culture. They also influence a region’s micro-climate,” he adds. With 9.7 per cent of its area under wetlands, Assam is a prominent wetland-rich state in the country.

Flanked by the landfill on one side, Deepor beel, as the wetland is called, was notified Ramsar site for 40 sq km area. Now, only 10 sq km is available for water spread. On the southern end of Deepor are stone quarries, adjacent to the Rani-Garbhanga reserve forests, a crucial elephant corridor and habitat of the hoolock gibbon. Intermittent blasts, thick dust from the quarries and constant groaning of trucks make Deepor look more like an industrial hub.

Quarrying within Deepor has pushed this once-pristine ecosystem to the brink of disappearance, says a Planning Commission field report of 2008. It also fixes the blame on construction of a railway line, large-scale encroachment, heavy siltation from the denuded hills, accumulation of filth and waste from the Bharalu and Bahini rivers, unregulated fishing practices and invasion of aquatic weeds.

But Guwahati has grown in the last two decades because of construction work on its wetlands, says Bhattacharya. Its population has jumped from 500,000 in the 1990s to more than 1.2 million now. After the economic boom in the 1990s, wetlands were sold dirt cheap. “The national highway to Dispur, which once had wetlands on either side, now has shopping malls, apartments and showrooms. Residential areas like Tarunnagar and Lachit Nagar are also built on wetlands.”

With the disappearance of wetlands, flash floods also increased. So much so that it became an issue during the Assembly elections in April this year. The monsoon last year had brought telling miseries for the residents of Guwahati.

The National Disaster Response Force was called upon to rescue over 200 people and provide relief to many others. In June this year, the government started evicting “encroachers” from wetlands and hills.

“I was born and brought up around Gandhi Basti, located in the south-eastern fringe of the city,” reminisces Jaideep Baruah. “As children, we would fish in the marshy wetlands during rains. But in the past 15 years, most of the wetlands have been filled up. Flash floods have increased manifold as no place is left to absorb the excess water.” Baruah heads the environment division of Assam Science Technology and Environment Council (ASTEC), an autonomous body which advises the state government.

The worsening flash flood situation, says Baruah, was the genesis behind the Guwahati Water-Bodies (Preservation and Conservation) Act, 2008. The Act notified three major wetlands in Guwahati—Deepor, Silsako and Borsolu-Sorusola. But by this time the ground situation had already deteriorated.

Silsako, once a 120-ha wetland, has turned into a grand multiplex. It has a tennis court, a hotel owned by the Tata Group, a hotel management institute, an institute for social studies and land which people say belongs to Devanand Konwar, the Governor of Bihar who hails from Assam.

On the other side of Silsako are over 1,000 hutments. Most families settled here about 15 years ago. “The collapse of the rural and agricultural economy post-1990s and the boom in construction and service sector around Guwahati fuelled this migration,” says Arupjyoti Saikia, professor at the Humanities department in IIT-Guwahati. 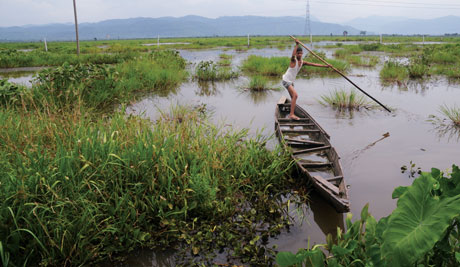 The government calls them encroachers. “We came here looking for jobs and bought the land from tribals,” says Nokman Ali, a construction labourer and an “encroacher” at Silsako. “I have worked to construct the Tata Group’s Ginger Hotel. Why does the government want us to clear the place when it allowed the rich to build on wetlands?”

Though the government cites wetland encroachment as the reason, there are several other for flash floods, says Baruah. “The networks through which small rivers like Bharalu and Basistha carry water to the Brahmaputra are fragmented,” he says. Pollution and improper sewerage block the flow. The city never had a sewage treatment plan.

The disappearing wetlands and hill slope destabilisation have worsened the situation. Guwahati has several forested hills, but many have been denuded. The red, slushy mud gushes with rainwater flooding the city. The soil of the hill is also used to fill the wetlands and as raw material in the construction industry. “Two-thirds of the city was built by filling lowlands and wetlands with the hill soil,” says Pulin Kolita working on the state of Guwahati’s wetlands as a media fellow with the Centre for Science and Environment, a Delhi-based non-profit.

The government reasons that settlements in the hills denuded them leading to massive erosion, and so wants to evict the encroachers. But what was conveniently forgotten was the legalised encroachment by the high and mighty. The first half of June 2011 witnessed eviction drives in many of the 14 forest hills that surround Guwahati. Hutments were demolished, asbestos roofs and water tanks donated during elections taken away. The “encroachers” were not served prior notice of eviction.

This led to massive protests. On June 22, police opened fire as protesters were planning a roadblock after an unsuccessful attempt to submit a memorandum to the chief minister. Three died, including 10-year-old Ruhul Ali who was shot in the chest.

Ali’s father Yunus lives in Lalmati, a hill that forms the backdrop of the picturesque National Games village constructed in 2007. “I came from Barpeta district to work as a carpenter in Guwahati. Unable to afford the high rent, I moved to the hill nine years ago,” says Yunus. Indigenous tribes like Boros and Karbis who work as construction labourers, painters, plumbers and daily wagers inhabit the Lalmati hill. “People went to the government asking for pattas (land titles). But the police chose to shoot them instead,” says Gogoi of KMSS. “Now they are planning a luxury residential complex that will cut into the same hill,” she says.

Shangri La—Heaven On Earth, the 10-ha residential complex, will have seven blocks, each with 20 storeys. It awaits final clearance from the Union environment ministry but builders are already accepting booking amounts for apartments that would cost between Rs 35 lakh and Rs 45 lakh.

“It is the government which has institutionalised encroachments. The land revenue department sees wetlands as revenue generators and neglects the need to conserve them,” Gogoi adds.

The department has already earmarked the entire Dobka beel, next to the Guwahati airport, for a 52 ha complex for Assam Rifles. “It will affect over 500 farm households and 150 fisher families,” says Jafar Ali of Mehnati Krushak Jagran Samiti, a farmer’s group resisting the acquisition.

“Dobka is connected to Deepor. River Kalmani from the hills feeds this wetland. After the complex comes up, neighbouring fields will be submerged and farming will become unviable. We fear even Guwahati airport will get submerged. But no one listens,” rues Ali.

“Borosola-Sorusola and other wetlands which are critical storm water basins are either polluted or encroached upon,” says Dhrubajyoti Sahariah who teaches geography at Guwahati University. “Pollutants from the Noonmati oil refinery, owned by the Indian Oil Corporation, have turned the water at Sorusola black. Borosola looks like a garbage dump” (see ‘Shrinking wetlands’). 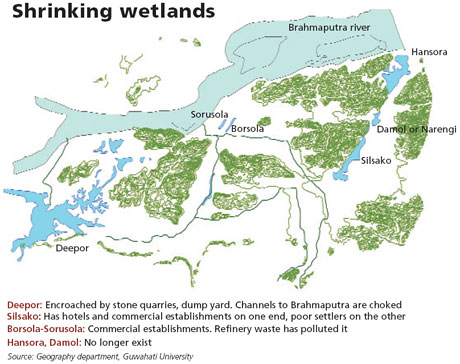 The other casualty of shrinking wetlands of Guwahati is migratory birds. During winters, Deepor sees some of the largest congregations of aquatic birds in Assam, states Planning Commission’s 2008 report. Because of its rich avian fauna, Deepor has been selected one of the Important Bird Area sites by the BirdLife International. But the count has dwindled. “In the winter of 1989 we had counted 19,000 birds in a day in Deepor. By 2008 the number came down to 3,000,” says Baruah.

ASTEC has submitted a proposal for an autonomous development authority, on the lines of Chilika Lake in Odisha, to the state government. This might help solve management issues for Deepor, thinks Baruah.

For a city nestled on the flood plains of Brahmaputra, the fourth largest river in the world, wayward growth means doomsdays during monsoons. To curb this, the Guwahati Metropolitan Development Authority is working on a detailed plan. Choked channels and rivers that link wetlands to the Brahmaputra will be opened up. Sewage water will be treated before it is drained to the water bodies. Elaborate plans are being drawn to restore the fragmented network of water bodies.

A day after the three protesters were shot, government constituted a committee headed by Bhumidhar Barman, former land revenue and disaster management minister to look into the possibility of granting pattas, to poor landless families living on the hills. However, it “will follow a zero-tolerance policy and will be firm in removing encroachments and human settlements from wetlands,” Himanta Biswa Sarma, state education minister and government spokesperson, reportedly announced.

A month later, when Down To Earth visited the wetlands and the hills, the marginal settlers were still awaiting a visit from the committee. Work was in full swing at the stone quarries and the dump yard at Deepor. On the Silsako beel, neon lights from Ginger Hotel gleamed in the dark as a man fished in the disappearing waters.